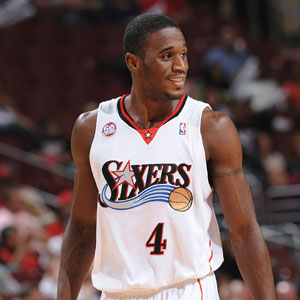 Here at Philadunkia we continue our series titled “School’s Out for Summer” where we hand out final grades to the players on the 2008-09 Philadelphia 76ers based on their regular season and post season production this year, as well as a few other factors. Receiving his grade today is the enigma wrapped in a mystery named Kareem Rush.

Kareem Rush’s 2008-09 season with the Sixers can be summed up in one word: benched.

The man played in 25 games logging in eight minutes per contest. That’s barely above one-quarter of a NBA season in games played! It was one of the biggest mysteries all season to myself and I’m sure a lot of Sixers fans as to why the Sixers even bothered signing Rush in the off-season if he was never going to unsnap his warm-up pants and check in at the scores table.

Back when Rush was signed, GM Ed Stefanski had this to say about the man:

“As we continue to build our team, we’re fortunate that we were able to sign a player as talented as Kareem Rush. We feel his abilities on both ends of the floor and his range as a three-point shooter will be assets to us this season.”

To be honest I was excited about the Sixers signing Rush in July of 2008. In 71 games for Indiana, during 2007-08, Rush in just 21.2 minutes per game hit for 8.3 points per game. He also drilled 102 3-pointers at a career-high 38.9% clip. He recorded at least two made three-pointers in 33 games, including three or more 13 times. Just as a point of reference, back in 2007-08, Andre Iguodala led the Sixers in games with multiple three-pointers made with 30. I really felt with this signing that Ed Stefanski addressed the Sixers need for a legit 3-ball threat who could come off the bench and provide an offensive spark. Additionally, I looked forward to seeing if Rush’s outside shooting could open up the floor for other Sixers.

Unfortunately, I never got to see what Rush could do for the Sixers. All year, I found myself questioning Tony DiLeo’s decision making on a nightly basis. How could you let players like Royal Ivey, Kareem Rush, and Donyell Marshall who are great shooters ride the bench as semi-decent shooters like Andre Miller, Lou Williams, and Willie Green keep bricking from deep? For whatever reason it happened, and Rush received the worst of it.

Rush’s 2008-09 season was the equivalent to a college student who receives and F/A (Failure due to Lack of Attendance) from his professor at the end of a semester. An F/A is a way for the professor and the student to quietly acknowledge that their semester together was a mistake without doing any damage to the professor’s reputation or the students GPA. The best thing about an F/A is that the student can retake the course at a later date and erase that prior mistake from their record.

We’re not sure where things went wrong for Rush. Did he not fight hard enough in practice to prove that he deserved playing time? Was Rush simply the odd man among the numerous players the 76ers tried out at the two-spot? Is there a chance he was in the Sixers dog-house for some unknown incident? Was his lack of playing time because of an injury the franchise chose not to address with the public? A lot of questions surround Rush’s time here in Philly and we may never know the truth about what happened to Kareem Rush this season.

Rush’s lack of playing time makes it impossible to grade his offensive or his defensive performance over the course of this past season. I guess in the intangibles category you could give him and A. After all, Rush was frequently seen standing, waving a towel and cheering on the Sixers who were out on the floor. Also he was always ready with a high-five for guys who had just come out of the game. Most importantly, Rush kept the frustration he must have been feeling over his lack of playing time to himself. Most NBA players in his situation would have lost their minds, whined constantly to the media and eventually become a distraction to the team. But to his credit, Rush was the ultimate professional and never uttered a word against DiLeo, Stefanski, the Sixers organization or his teammates. So he has my respect.

Still it’s not enough to give Rush a legitimate grade for this season, so I’ll just give Rush an F/A for his year with the Sixers and surrender to the idea that everyone involved believes his signing was a mistake.  I just hope that Rush gets a chance somewhere else next year to amend for 2008-09 on his NBA.com career stats page.