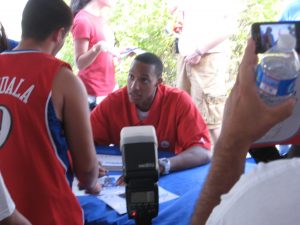 What do you do when you’ve just wrapped up your worst season in a decade, fired your head coach, and traded your starting center for two guys with tons of “upside”?

You throw a Beach Party of course!

On Saturday, July 31st at Jack’s Place in Avalon the Sixers hosted the 2010 version of their annual Beach Bash.

Here was the scene: A bar/restaurant in one corner, a parking lot with a signing tent and stage and a few inflatable-bounce-pits in the other.  It was really hot and Evan Turner was in the house.

The attention of the crowd was heavily focused on Turner and everybody cheered loudly when the No. 2 overall pick in the 2010 Draft was introduced.  All-in-all a pretty exciting moment.  After allowing him a beat to soak in some adulation (which I think contains Vitamin D), his handlers led him to the autograph table and he went to work at the small-ball of fan pleasing, signing and smiling.  And stayed at it.  Patient guy.

While I was angling to talk to Turner, Flyers GM Paul Holmgren took the podium and addressed the crowd.  He shared with them some specifics on the Flyers and some platitudes about building a winner. I turned around to see if Ed Stefanski was listening.  He wasn’t.

When Holmgren was through, I asked him a few Sixers questions while a PR rep looked at us quizzically.  He expects 31 wins for the Sixers this year, 17 ppg for Evan Turner, and thinks AI9 will finish the year in a Sixers uniform.  Write it down.

But back to the order of the day.  After Turner shot a Kia commercial, signed more autographs, and shook hands with all the people his handlers gently demanded he shake hands with, I got a chance to talk for a few minutes with the belle of the ball. 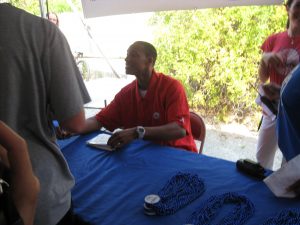 Now what I wanted to do was get a sense of the sort of player Evan Turner will choose to be — the operative word being “choose.”  E T, while not a guy with overwhelming physical skills, is very good at everything there is to be good at on a basketball court.  He scores often and efficiently.  He owns the boards.  He has great court vision, soft touch, and the assists to prove it.  He gets steals.  He blocks the ball well.  He’s good from the line.  Evan Turner can be any kind of player he wants to be– the question is what kind of player is that?  A scorer?  A volume shooter who makes All-Star teams but does little to help his team win?  Or is he willing to be different.  To do the thankless tasks that will elevate his team but not necessarily himself?  In short, what are his values?

So I asked him.  And he patiently signed more autographs while he answered.    “I want to make my teammates better,” he told me.

“You win by being accountable.  Playing tough.  What I do best is board and play off lanes.  I make my teammates better. I just want to win games.”

“This year, my goal is to become a leader.  To be a teammate.  To do what I did in college.” 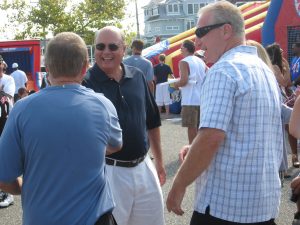 Encouraging answer.  But what steps is he taking to become that sort of player?  Had he spent any time with Iggy — taken in any lessons from not only his most accomplished teammate but the one whose game his most closely resembles?

“I’ve actually know him since high school.  We worked out at the same gym.  He and I would talk.  We’d play open court.  He’s a good guy and a great player.  I’ll always remember his kindness.”

I asked him if there any other players in the game, past or present who he views as an analog for himself, that he patterns himself after?

“A lot of people say Brandon Roy, and he’s a great player, but…”

What about Grant Hill?

“Yes,” his eyes widened and he smiled, “I definitely see Grant Hill.  People have been telling me that for a long time.  I like the comparison.  Coach Collins made me a highlight-tape of him playing in Detroit that I watch.  I would love to have a career like his.  I like his game a lot.”

This is very good news. Grant Hill, while not only having a very similar build and skill set as Turner, represents just about everything that is good about basketball. To quote a certain former-Sixers-coach, he plays the game the right way. He also played it, briefly, better than anybody else. He was the most productive player in basketball during the 1996-1997 season; a season during which he was coached by Doug Collins.  Evan Turner has picked a good lodestar.

Grant Hill During the 1996-1997 Season vs. The Average Small Forward
He also seems, if not unflappable, not easily flapped.  He wasn’t concerned about the struggles he had in the Orlando Pro Summer League, where he shot poorly from the floor and generally looked flat.

“I’m gonna be fine. It was just a different kind of competition, a new element to get used to.  It’s just something to learn from.  Especially once the offense gets set, we’re gonna be good.  I’m gonna be good.” 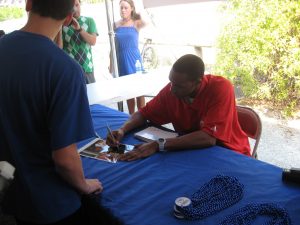 His back is good too.   “It feels like a million bucks.  Completely healed.  What I injured was my L2 and L3 vertebrae, which was ok because they heal easily.”
“Sometimes my right side feels a little weaker than the left, but I’ve rehabbed it, I stretch it out, and it’s not going to be an issue going ahead.  Like I said, it feels like a million bucks”
Though I didn’t get to spend much time with him, here was the salient impression; he’s going to be very good.*  My only concern, if you can even call it that, is that live and in person he seemed a little slight to me.  Not Stephen Curry slight, but he looked like he could use another 5-10 lbs of muscle.  A minor quibble though-this is basketball, not boxing-and I’m sure he’s in the gym getting his ‘swoll on’ as Allen Iverson used to say.
So I finished up with Turner, shook his hand, grabbed a Sprite and hit the road.
All toll, it was an enjoyable event, and also one that pretty neatly epitomized the present state of the Sixers:  There’s real substantive reason for hope, but it’s neck deep in reminders of what you’re hoping to be delivered from.  And hose reminders make the hoping a little harder.   October here we come.
Philadunkia Note:  * Full disclosure here. I am a huge, huge, Evan Turner fan. I twisted an ankle jumping around on lottery night when the Sixers pulled the two-ball and for all intents and purposes, Turner. He’s tough (missed 6 games with a broken back), proven (two years of top-shelf college production), and loyal (returned to OSU for his junior year after a great sophomore season).  So I went into this predisposed to liking Evan Turner.  That said, as soon as I sat across from him I was more smitten than expected.  He’s a polite, attentive, engaged, and engaging guy.  You are going to like Evan Turner a lot.  Your girlfriend is going to like Evan Turner a lot.  Your grandmother is going to like Evan Turner a lot.  If things don’t work out for him here, it won’t be because of any character defect.

RT @JClarkNBCS: Jimmy Butler on possibly facing Sixers in playoffs “I think that our team can match up with that team well. Keep those pr…
h J R
Follow philadunkia