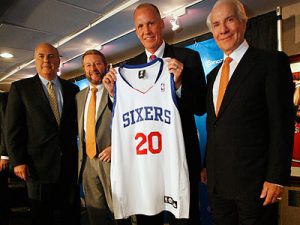 We all know that Doug Collins faces a very, very difficult challenge in turning around the 76ers.  Guiding Philadunkia’s home team to a better season in 2010-11 will be the the least difficult part of Collins’ stay here in Philly (Several of us here at Philadunkia could coach the 76ers to 30 wins).

Building a consistent winning franchise here in Philadelphia will not be so easy.  The 76ers are young and talented, but they have a lot of repetitive pieces and players that don’t fit together all that well.  Additionally, the Elton Brand riddle / enigma still needs to be solved.  Last, but certainly not least, the Sixers are cap strapped for the near future.  These items make the long range goal of building a championship NBA team here in Philadelphia a daunting task.

So we’ve established that securing a parade down Broad Street in honor of the 76ers will be a monumental feat, but just how tough is the immediate road (2010-11) that lies ahead for new head coach Doug Collins?

Well according to Foxsports.com…

The job that Collins accepted earlier this summer ranks as the 5th toughest job in the NBA for 2010-11.

” The Sixers have gone through three coaches since signing Elton Brand two years ago.  Can Collins win with him?  Brand and Andre Iguodala may be the least complementary set of teammates in the league.”

According to Foxsports.com here are the “10 toughest coaching jobs in the NBA for 2010-11.”