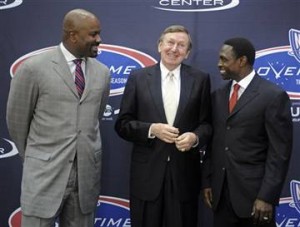 Yesterday, the 76ers continued their odd, borderline incestuous relationship with the New Jersey Net franchise by hiring Rod Thorn as the new “President” of the franchise.

Yahoo.com’s Adrian Wojnarowski first reported the story last night via his Twitter account and now several news sources have confirmed the hiring.  The Sixers will be holding a press conference later today.

As we all know, Stefanski has been hanging on to his job by a finger nail and this move basically ends his reign as the decision maker on player personnel moves for the Sixers.  Despite what many are basically calling a demotion, it appears Stefanski will stay on and have a similar role he had under Thorn with the Nets.

Thorn departed the Nets organization after a decade of service last month.  He decided against staying on to work for the Russian version of Mark Cuban — Mikhail Prokhorov — who is the new owner of the Nets.

Mark Ginocchio over at netsarescorching.com breaks down the highs and lows of the Rod Thorn era in NJ.

Here is a deatiled history of the moves Thorn made as the head man for the Nets (courtesy of Nets Daily).