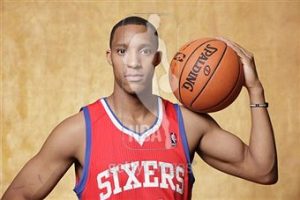 Courtesy of Ben Q. Rock of Orlando Pinstriped Post these are Evan Turner’s rookie portraits from Getty.  Based on the photo at left the Sixers have made a slight change to their road uniforms which now has blue and white trim all the way around the neck line.  When the Sixers introduced the new, retro uni in 2009 (see pic after the jump), the jersey had white on the front of the neck line only, with blue-only trim around the rest of the collar.  Not a major change, but worth noting we thought.

SI.com lists former Sixer and future Hall of Famer Allen Iverson as one of the best available free agents.  Also on the list are former Sixers Louis Amundson, Larry Hughes and Jerry Stackhouse as well as Philadelphia native Ronald “Flip” Murray.  That’s not a bad five to have out on the floor.  Well maybe not in the NBA, but it certainly would win a few at in the Sonny Hill League.

According to philly.com, Andre Iguodala is “excited” to be part of Team USA.

Kelly Dwyer at Ball Don’t Lie proposes a trade between the 76ersand Pacers and we have to admit we agve it some serious consideration before saying, “No thanks”…

In his proposal Dwyer would have the Sixers send Elton Brand, Andre Iguodala adn Mo Speight to Indy and in return the Sixers would receive Mike Dunleavy, T.J. Ford, Jeff Foster (all expiring contracts) and Paul George to Philadelphia — along with their first-round pick from next year (top three protected, losing said protection the year after).  Read Dwyer’s support for the deal here.

More craziness from Dwyer as he ranks the NBA point guards and has the 76ers Jrue Holiday slotted at 28th in the League.

Via his Twitter page we learn that AI9 is super pleased he brought his Ipad to Europe with him.

Also on Twitter…from the NBA’s Twitter account, we get a TwitVid with Evan Turner from the League’s annual Rookie Photo Shoot Day.

CSNPhilly.com alos has some video of Turner at the NBA Rookie Photo event