The Philadelphia 76ers just confirmed reports that the team met with Boston Celtics Associate Head Coach Tom Thibodeau today in regards to their vacant head coaching position.  Per team policy, the team had no further comment on the interview with Thibodeau. Below is the profile of Thibodeau we posted this morning…

He’s the least quoted and arguably the least famous candidate involved in the 76ers head coaching search, but basketball heads that follow the NBA closely certainly know about the man’s work — the great defense that is linked to the Boston Celtics organization for the past two years. The Celtics were third in the NBA in points allowed per game this season, while in 2007-08 they ranked second in the NBA. What many don’t know is the man behind Boston’s defensive success. Well, please meet Tom Thibodeau.

Next season will mark the 15th year in coaching for Thibodeau’s NBA career. Along the way Thibodeau has been an assistant coach for the Minnesota Timberwolves, Seattle Supersonics, San Antonio Spurs, Philadelphia 76ers, Houston Rockets, and finally the Boston Celtics where he reached coaching’s highest honor by winning an NBA championship. After running the interview gauntlet for a head coaching position during last year’s off-season, it looks as if the 2009 off-season will be no different the C’s assistant coach. This summer, Thibodeau’s interview trail is expected to wind through Philadunkia nation for visit with the 76ers very soon.

The Sixers are a team with plenty of offensive talent, but lack the defensive mind set to take them further than a 2-1 series lead over a team in the first round of the NBA Playoffs. The Sixers ranked 14thin defensive efficiency for the season, but in comparison the Cavs, Celtics, and Magic, who took home the top three spots in the Eastern Conference, also took the top three spots in the league in defensive efficiency. With a defensive oriented coach such as Thibodeau manning the coaching helm, the Sixers should improve drastically on defense.

During Thibodeau’s tenure coaching for the Knicks, New Yorkset a then-NBA record by holding 33 consecutive opponents under 100 points in the 2000-2001 season. Than later when Thibodeau packed his bags for Houston, in just his first season coaching he helped the Rockets set franchise records in scoring defense and field goal percentage defense. In 14 NBA seasons, Thibodeau has helped his team finish in the NBA’s Top Ten in team defense 11 times. 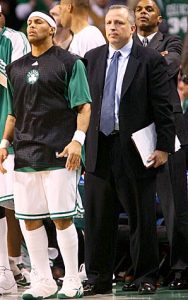 In terms of talent, Thibodeau will have plenty to work with next season if he were to be head coach. Andre Iguodala, Elton Brand, Samuel Dalembert, and Thaddeus Young make up a nice core of players Thibodeau will have who are great athletes and very defensive minded as well. Other 2008-09 team members who the Sixers will possibly re-sign in the off-season such as Royal Ivey and Theo Ratliff are very solid defenders. Thibodeau could easily turn them into great defenders. However there are also some projects on the Sixers who are inked to deals next season who Thibodeau will have to work with on a daily basis to better their defensive prowess. Lou Williams, Reggie Evans, Willie Green, Marreese Speights, and Jason Smith are all talented players, but they lack defensive discipline and at times it appears the ability to understand NBA defensive schemes. Thibodeau has seen plenty of players that fall into both of these categories throughout his coaching career, which is why he would be a great candidate to come in and make the current Sixers players solid defenders in the NBA.

If the Sixers look to go beyond the first round of the playoffs next season than they must start with defense. There is no better way of improving your defense, than by getting a coach who is highly regarded for his ability to design and teach tough defensive schemes. Thibodeau has seen every offensive set in the books and knows how to react to each of them defensively. If Thibodeau’s coaching was compared to a chess player, he would be the late chess legend Bobby Fischer. Like Fischer, Thibodeau has been around so long that he knows how to counter every move. If the Sixers hope to put teams in checkmate on defense next season and take that next step toward and NBA title, than Thibodeau is their man.