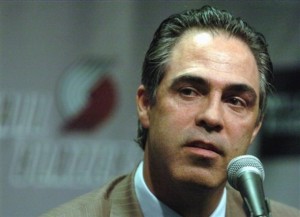 Was this a good move?

In an attempt to answer this larger question we have broken it down into its component parts:

Did Stefanski deserve the demotion?

Was Thorn the right hire?

And if not Thorn, who?

Over the last wo tweeks our installments in this series have evaluated the Ed Stefanski era and examined the Rod Thorn hiring.

We established last week that Thorn wasn’t exactly an inspired or inspiring hire, but while it’s easy to criticize – and fun to do – we decided to take it a step further and offer an actual alternative choice to Thorn. 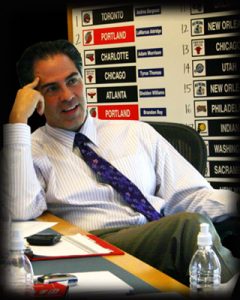 A good starting point would have been with the organizations the Sixers hope to emulate, or should hope to emulate.  Earlier this summer, Forbes ranked NBA teams by win efficiency, or wins per dollar of payroll spent.  Because we can’t hold management accountable for stingy ownership, this is a better reflection of quality of decisions than total wins.  The five most cost-effective teams that also made the playoffs were Portland, OKC, Atlanta, and Cleveland, with Phoenix and Orlando tied for fifth (Not incidentally, NJ was last.  The same NJ whose brain trust we’ve placed our organization in the hands of).

There is, however, a valid argument to be made that it’s risky to put an untested and unproven character like Cho in such a powerful position.  Smart people have wilted under lesser pressures than those that come with running an NBA team.  So our dream hire would have been there before.  Taken some lumps.  Jousted with the media.  Made tough decisions and lived with the consequences.  But ideally they would also be young and adaptable, able to change with a changing league – changed both in the new style of play recent rules changes have precipitated and the new modes of analysis advanced statistical tools have enabled.  Someone not wed to an ideology.  Somebody like Kevin Pritchard*.

(*Seth Wickersham wrote a really interesting, and convincing, article earlier this year in which he tried to predict the next great NFL head coach.  He argued there are four traits that are most predictive of NFL head coaching success: Youth (between 41 and 49), experience (had at least 11 years of NFL coaching experience), proximity to success (been an assistant on teams that had won at least 50 games over a five year period), and having done it before (had one, and only one, previous NFL gig).  I’d imagine that the possession of the civilian equivalent of these characteristics, each of which Pritchard has in some degree, increases the likelihood success in pretty much any field.  BTW, the guy who graded out the best in his system was the Eagles own Marty Mornhinweg.  Kind of undermines his argument.)

Pritchard got a raw deal from an impatient Paul Allen in Portland (though in fairness to Allen, it’s easy to be impatient when you’re facing a second bout with lymphoma), but despite his unceremonious dismissal (he was given his pink slip ON draft day this year and then asked to complete his team’s draft, which he did admirably), he had a great run.  After being named assistant GM of the 21-win Blazers following the 05-06 season, he orchestrated a series of trades so one-sided in his favor – he got LaMarcus Aldridge for Tyrus Thomas and Victor Khryapa; Brandon Roy for Randy Foye; Sergio Rodriguez for a duffle bag full of money and season two of Curb Your Enthusiasm; Marcus Camby for Steve Blake and Travis Outlaw, etc — that the phrase “Pritch-slap” was coined in his honor.  The past two years, when those moves have begun to come to fruition, the team won 104 regular season games, despite missing their ostensible cornerstone, Greg Oden, for large chunks of both.

All of this is completely unfair of course.  Two unlucky playoff series is not a reasonable sample by which to judge a team, or its architect. Oden’s injuries have been fluky – when he’s healthy he’s been extraordinarily productive.  And as for Durant factor, Oden was the consensus top pick that year, had just led his team to a national championship game in which he nearly and single-handedly vanquished one of the greatest college teams of recent history, and was – and is (penis-gate notwithstanding) by all accounts a great guy.  It was the smart pick, regardless of how it worked out.  Being a successful GM isn’t about being right every time, it’s about building and employing a sound decision making framework that maximizes the likelihood you will be right.  You’re not always going to have the best outcome, but you can always make the best decision.

Pritchard is also, in keeping with the organization’s apparent desire to hire only people who have been employed by it or the Nets before, a former Sixer.

What we at Philadunkia would have done then was hire Pritchard to serve as President, put under him as GM/chief interlocutor, a young upstart who’s learned at the hip of one of the heads of the Suns or the Thunder or another of the league’s success stories, and then thrown a wild-card in the mix as a special advisor.  Our wild-card would be Professor Dave Berri.

Berri, the author of Wages of Wins, Stumbling on Wins, and editor of and prime contributor to the Wages of Wins Journal, is a relentlessly clear-eyed sports economist at the University of Southern Utah who, amongst other terrific sporting insights, developed an algorithm that translates box-score statistics into how many actual wins a player responsible for.  How accurate is it?  His model explains and predicts team win totals with 95 percent accuracy.  He’s gained almost Bill Jamesean stature (For the record, the Red Sox won their two world series after hiring James as an advisor) amongst the small coterie of stat nerds that troll the web extolling the virtues of rebounding and making snarky comments about Al Harrington in the comment stream of any blog that hasn’t blocked them yet.  He’s smart, and because he’s spent his life in academia, pretty much any offer we made would be a huge raise.

This triumvirate strikes a near-perfect balance between age and youth, convention and originality, experience and innovation, certainty and risk.  It’s a completely reasonable arrangement.

Which is exactly why it would never happen.