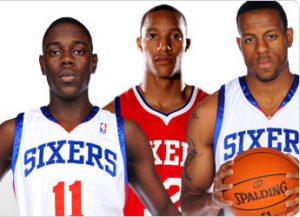 Sean Deveney of SI.com talked to a host of NBA scouts about which players are about to have major break outs this season.  At the top of the opinion poll is the Sixers Jrue Holiday.

Over at foxsports.com John Galinsky ranks Evan Turner as one the Top 5 challengers to the expected crowning of John Wall as the 2010-11 ROY.

Staying on the “Evan Almighty” front, Brian at depressedfan.com asks, “What can we expect from Turner this season?” .

A look at AI9’s stats through the first 6 games of the FIBA World Championships.  No one here at Philadunkia is shocked that he leads Team USA in steals, but how about the fact that Iguodala is 1st on the team in FG % (59.1) among players with 20 or more shot attempts.

Speaking of AI9…Fran Blinebury of NBA.com lists AI9 as one of the players who are NOT currently on the market, but could get moved at the trade deadline.  Blinebury writes, “…it’s new coach Doug Collins’ job to turn the key and unlock what is still unfulfilled potential. But if he’s not getting through by midseason, there is every reason to think that the Sixers would turn the future over to No. 2 draft pick Evan Turner, who plays the same position, and send Iggy off to bloom in another location”…In the mean time, Iguodala continues his pursuit of a gold medal today at 11am vs. Russia.

It’s never too early to check on the 2011 NBA Draft…nbadraft.net has the Sixers picking 11th and taking Colorado shooting guard Alec Burks.  That seems odd given that they just drafted a shooting guard in 2010 and crowned him the face of the franchise.

Shaun Powell of NBA.com lists the 76ers as one of 8 teams that could crash the 2010-11 NBA Playoffs.

An older but still interesting article on Quinn Snyder’s long journey to his current position with the Sixers.

This has nothing to do with the 76ers, but it was great to read that Philly’s own Mustafa Shakur (Friends Central HS) hs signed withe the NOH.

Via his Twitter account we learn that Thaddeus Young owns an iPad and his followers helped Thad assemble a playlist for it.