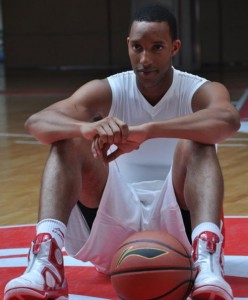 As you may or may have read on Twitter, 76ers first round Draft pick Evan Turner has been on a tour of China promoting his new shoe from the Chinese basketball sneaker company Li-Ning.  Back on August 23rd Turner signed a shoe endorsement deal with Li-Ning, a company well known for its table tennis and badmiton apparel that has recently become a factor in the basketball sneaker wars.   The upstart Chinese shoe brand also boasts Shaq, Baron Davis and Damon Jones as endorsers of its basketball kicks.

Nabbing Turner away from Nike and adidas was a major coup for Li-Ning and when the #2 overall pick in the 2010 NBA Draft signed on, Li-Ning Brand Initiative Director for Basketball, Brian Cupps had this to say, “This is truly a game-changing moment for the Li-Ning brand.  Adding a supreme young talent like Evan Turner sends a message to the global basketball community that Li-Ning basketball is committed to being a player on the global stage.”

Li-Ning must have truly been excited to land Turner because they wasted no time in producing a line of shoes for the 76ers new shooting guard.  On his recent tour of China Turner debuted his first shoe model which is named the “Conquer.”

Thanks to our friends at nicekicks.com for the pics and additional words.

“Evan Turner recently debuted a new Li-Ning basketball model dubbed the Conqueron his China tour.  The Conquer is the first sneaker shown from Li-Ning’s new ‘Defend & Conquer’ campaign, and Turner will be the lead endorser of this new collection.  Supposedly, the former Ohio State player will wear the base white sneaker shown above left during home games, while a Black/Red pair will be provided for away games (shown below). “ 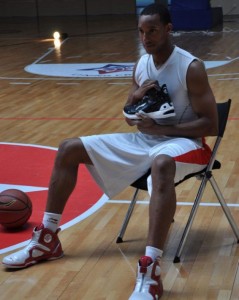 “As for the Conquer’s characteristics, it contains a primarily patent leather-textured base with a zip-up construction over the midfoot/lacing panel.  Evan Turner’s number 12 appears on the collar section and the Li-Ning logo is located on the side panels in grey.”

In our opinion they’re not half bad.  To be honest the shoes actually reminds us a little of the Nike Flightposite II’s.

Let us know your thoughts.