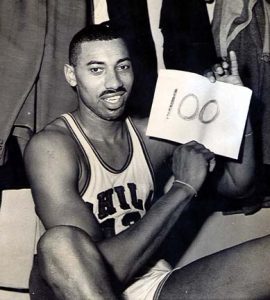 Late last week, ESPN.com launched a project that with the help of online fan voting attempted to determine the five ultimate players (by position) in every NBA franchise’s history.  It’s a great and fun post and if you haven’t voted yet, we highly suggest you take five minutes of your time to do so.

You can view the up-to-date results of the voting for the 76ers all-time team by clicking here.

In our opinion the voting for the Sixers all-time starting five has been very predictable and while there’s nothing “wrong” with the all-time lineup the fans have assembled for the 76ers franchise, Philadunkia’s Tom Sunnegren believes that by bending a few of the voting rules he was able to put together a squad that would trump the team the voters have put out on the floor.  One thing is for sure, these greats have been the driving force behind 76ers Tickets sales throughout the decades.

OK, clearly I’ve done a little positional switcheroo-ing here, so by each of my selections below I’ll take a few graphs to justify my brazen disregard for the sanctity of position.  What precipitated all this maneuvering were two decisions I made early in the process: Allen Iverson cannot be on this team and Moses Malone cannot be left off it.  So the solution was evident: Go big or go home.  I was already home, so going big is exactly what I did.

PG – Mo Cheeks: This was the roster spot that demanded the least deliberation, though this owes more to a dearth of elite Sixer point guards than Cheeks own accomplishments.  Which isn’t to say that Cheeks wasn’t great, he was, he also just doesn’t have a lot of company in that department.  (If you went to Applebees with all the great PGs the Sixers have employed you could feed them with a 2 for 20.)

If you need further evidence of that theory just note that Andre Millerwas voted our second-best point guard of all-time by sportsnation. 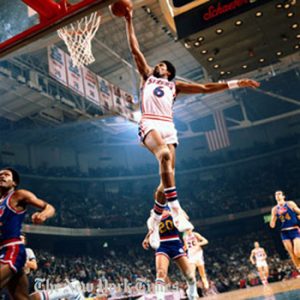 SG – Dr. J: So we’ve slid Dr. Julius Erving from three to two, a position I’m not sure he’s really ever played, but one that’s not outside his skill set.  And even if it’s an imperfect fit, a Doctor with a slightly less than 100 percent degree of comfort with what’s required of him is a whole lot better than anyone else who’s ever lined up at SG in the occasional proud history of Philadelphia hoops (minus maybe Kobe’s senior year at Lower Merion).

This includes Allen Iverson, which is a declaration I imagine might stir up some belligerence.  Fair enough, but here’s what I see when I look at these two: The Doctor is seven inches taller than AI (listedas seven inches taller, probably more like nine), has a career field goal percentage that’s 80 points higher, averaged 3 more rebounds, only .1 fewer assists, a shot and a half more blocks,  and 0.5 fewer turnovers per game, won more titles (1-0), competed in more finals (4-1), advanced to more conference finals (7-1), tied in MVP’s (1-1), and even from an entertainment / basketball-as-performance-art vantage point, the Doctor has the admittedly incredibly fun to watch Iverson beat.  So even with the position adjustment, it’s the Doctor by an inch (or seven, possibly nine).

SF – Barkley:  The most contemporary of our All-Time team (The fact that I was eight when the last of our all-timers played for the 7-6 is as good an explanation as any for our futility), the Round Mound of Rebound was both shorter (actually 6’4 as opposed to his listed height of 6’6) and better than he gets credit for in the history books.  He led the league in true shooting percentage from ’86-87 to ’89-90, was first or second team All-NBA every year until ’95-96 (when he was third team All-NBA), won an MVP, and thrice led the league in offensive rebounds.

He also demonstrated that he could play with superstars, especially pertinent given our charge here. His Houston experiment didn’t pan out the way he Drexler and Hakeem hoped, but it was no fault of Sir Charles.  In three years with the Rockets (minus his injury abbreviated ’99-00 season) he never averaged below 15.2 points or 11.7 boards a game and he kicked even more copious amounts of ass when he was surrounded by superstar teammates who were still actually superstars and he wasn’t in his mid-thirties. He led the ’92 Dream Team in scoring and elbows to the chest of unsuspecting Angolans and the ’96 iteration in scoring, rebounds, and field goal percentage.  He also – and pay close attention if you’re concerned about this teams ability to shoot – set a still standing Olympic record by banging 87 percent of his threes for the original Dream Team.

And he’s lined up at small forward once in a while throughout his career. 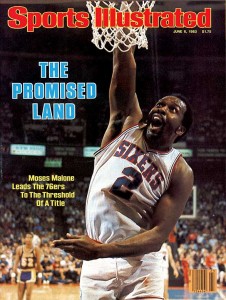 PF – Moses Malone: Moses Malone was retardedly good as basketball.  I’m not just using that as a lazy adjective either.  There’s a serious possibility that Moses was mentally disabled.  The guy couldn’t speak. He makes Michael Beasley look like Barack Obama.  Fortunately for the Sixers (and the Rockets and the Bullets and the Hawks and the Bucks and the Spurs and the Buffalo Braves and the ABA’s Utah Stars and Spirits of St. Louis) whatever disability he had had nothing to do with rebounding.  Hot damn could that guy rebound.  For a seven year stretch from the late-seventies to the mid-eighties, in only a single season did a guy not named Moses Malone lead the League in rebounding.

The season before he was traded to the Sixers (’81-82) he paced the association with 14.7 boards a game andaveraged 31.1 points.  He was like Dennis Rodman if Dennis Rodman was half Michael Jordan.  So despite being passed around like Toni Braxton after Mavs practice (nine teams in twenty seasons), Moses won three MVP’s and was first or second team All-NBA on eight occasions.  And he, probably more than any other player, was responsible for the Sixers winning that 1983 title.  There’s no way he wasn’t making it onto this team.

So we had to make room.  Because he’s a crude fit a PF (he’s a thoroughbred center) on some offensive sets I would probably line him up at C and let the Big Dipper play PF.

So those are the pieces.  How would they fit?  Beautifully.

This would be the most dominant frontcourt ever assembled.  This is a team that will own – ABSOLUTELY OWN – the glass.  The glass would be their property; tucked into their back pocket, number scribbled on a cocktail napkin they’d hardly ever call because they knew whenever they called she’d pick up.  And the glass would revel in its being owned, owned by them: it would stay up at night fantasizing about their life together, doodle Mrs. all-time Sixers on her notepads in school, linger outside the locker room after games so she could be the first one to say “congrats”, get a 7-6 inscribed heart tattoo on her hip freshman year of college, visit them every chance she got (while forgiving them for hardly ever visiting her), and spend whole weekends not eating when they didn’t return her hysterical, desperate –but not irrational– calls. Is there someone else, IS THERE SOMEONE ELSE, she’d wail when she saw the way they flirted with other facets of the game, and eventually could no longer delude herself into thinking they weren’t also a part of the Sixers’, her Sixers, game.  Her suspicions would be right.  This team would have plenty of other things going on; rebounding would be who they came home to, but there would be others.  Lots of them.

They would score inside with an unparalleled ease.  Nobody could matchup with them.  The matchup issues they would create couldn’t even be characterized as problems, as problems have at least theoretical solutions.  They would just be a situation.

They ball would move easily too.  Cheeks was a competent distributor, Barkley and Erving were hardly black holes, Moses was, well Moses was Moses, and Wilt – who averaged 8.6 assists per game for the ’67-68 Sixers – was, when willing, one of the most capable passing big men ever.

And despite their size, they wouldn’t just be a half court team: They could play up tempo when that was what the Doctor ordered.  Dr. J’s transition game requires no defense, Cheeks was a beast, and among Sir Charles most famous plays were his coast to coast (“without butter or toast”) rebound to run to unassisted two-handed slams.

D would be no problem either. Cheeks made five all defensive teams, Malone made two, Wilt made two after he rebranded himself as a team player in the twilight of his career, and Dr. J, while hardly a dynamo on the “other” end of the court, was no slouch either.  He was on the ABA’s all-defensive team in ’75-76, which – while kind of like being the best American car company – demonstrates that he at least tried.  Only Chuck was a turnstile.

Spacing, with all that size and no dead-eye shooter to drag defenders to the perimeter, would be an issue, and this issue would mitigate the effectiveness of the Doctor’s slashes and drives, but hey, sometimes a flaw makes the whole package more enticing.  Imagine the True Blood girl if she had nicer teeth.  No thanks.  Besides, I’m pretty confident Doc would find a way to get his.

So Sixers nation, that’s our five.  Is there a better team you can build from the parts the Sixers have assembled over the years?  Doubtful, I’d be surprised if a better team could be built from any teams parts.  Think you can you do any better?