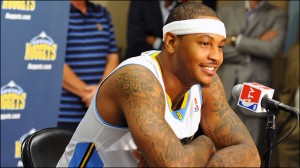 Ok, so there are some rumor winds swirling  from Philly.com that the Sixers have made an offer for malcontent Nuggets forward Carmelo Anthony, and that the Nuggets kinda, sorta, maybe like the deal.  The question of the hour is, do they like it, or do they like it, like it.

Let’s say they like it, like it.  I’m going to peer into my crystal ball and tell you how this one plays out (BTW, my crystal ball is a replica of Ed Stefanski’s head).  The trade would be incredibly popular initially with both fans and the less-savvy members of the media (but I repeat myself, zing!), and everybody would sing the praises of Rod Thorn and draw parallels between his acquisition of Jason Kidd ten years ago and the Nets consequent rise to the top of the East and his now acquisition of a twenty-six year old Olympian, near scoring champion and, in the circumspect and well-considered words of Chauncy Billups, “one of the top two or three players in the world.”  Hot damn, this Thorn is a wheelin’, dealin’, riverboat gambler!  He turned Igoudala into Carmelo.  How’s that for alchemy? — the columns would read.

Expectations would be high.  Through the roof.  They would literally explode through the roof.  After enough roofs were destroyed, people would learn not to keep these expectations indoors.  They’d be left outside to soar, to be free.  And why not?  Carmelo Anthony is the single best player in basketball not named Kobe, Lebron or Durant!  We know that because he scores the most. You can’t win without scoring points, anybody knows that.  And the guy he’s replacing?  Iguodala?  More like “ugly(jumper)odala!”  That guy sucks.  Look at his scoring for crying out loud.  Carmelo scores waaaaaaay more than him.  Carmelo, points, Carmelo, twenty-eight a game, Carmelo, scorer, Carmellllllllloooooo!  That’s how the conventional wisdom would go.   And who could argue with it.  Carmelo does score a lot of points.   And everybody knows the best player is the guy who scores the most.  Period. 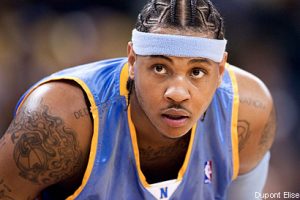 Pretty soon though the Sixers would have to start playing games, would lose these games, and this unexpected losing would cause the hype train –fuelled by a month of irrational exuberance– to tragically derail, possibly killing Phil Jasner.  After Jasner was mourned, people would return to puzzling over why the Sixers, the purportedly reborn Sixers, were losing games at such a break-neck pace. It’s the chemistry, Jrue Holliday hasn’t developed, Carmelo isn’t comfortable under the harsh Philly-spotlight, Doug Collins is the culprit, Lou Williams isn’t driving enough, Phil Collins is the culprit (The PA had played too much Genesis in pregame), Evan Turner hasn’t warranted his high pick, the papers would loudly speculate, throwing darts at the mounting losses.  The question that would be on the tip of everyone’s tongue (or the tongues of the few who were still paying attention to an NBA team with a .250 winning percentage) would be an understandable one: What the hell happened?

This, dear reader, is what the hell happened.  The reason the Sixers, despite swapping a scrub like Iguodala for a top player like Melo, would still suck is because Carmelo Anthony – all-star, 2ndteam all-NBA, Olympic gold medalist, NCAA national-champion, Carmelo Anthony– sucks.  And Andre Iguodala is a star.  Yeah, I went there.

Here’s a chart that demonstrates this little known fact. (The bold font indicates head-to-head superiority, red indicates inferiority to others at his position)

I’m going to take a moment here to remind you readers of a fundamental rule of basketball: the only way to understand a basketball player’s statistical performance is in relation to others at his position. A center who gets ten rebounds per 48 minutes is not doing a great job of getting rebounds but a point guard who gets ten rebounds per 48 minutes is a world beater.  Each position comes with unique responsibilities and opportunities and these unique responsibilities and opportunities manifest themselves in different average statistical performances.  Iggy and Melo play different positions and despite the fact that the position Melo plays gives players more opportunity to contribute, Iggy contributes more.

Let’s focus on just Melo for a moment though.  There are two problems with him.  He’s an inefficient shooter (this is partly because he’s a bad three-point shooter who insists on shooting three-pointers) and instead of responding to this hole in his game by not shooting so much, he shoots constantly. In the time it takes you to read this sentence, he will have taken three shots.  This takes shots away from other Nuggets who –if they are at least average shooters– would be more likely to turn them into points.  The second issue is he turns the ball over more than he should.

So despite his ability to get to the line, overall Melo is just an average player (I shouldn’t have said he sucked earlier. I got carried away).  A-v-e-r-a-g-e.  This, in a vacuum, is ok.  Average players are actually pretty valuable.  The problem with Melo though isn’t his averageness, it’s that he makes a ridiculous amount of money for it.  Here’s a chart that explains the cost/benefit of employing him over the past five years.

That negative number on the far right is the difference between what he’s paid and what he’s worth.  It’s quite a gulf, and it’s one that’s likely to widen.  His best career season he produced $12 million of wins for the Nuggets. If we assume he has the best season of his career every year for the remainder of the extension he’s going to sign with whoever(a charitable assumption for Melo), he will be getting paid about fifty million dollars more than he’s worth over the course of the deal.  So he’s a really bad deal.  Oh, and here’s Iguodala – a bargain player and a comparative steal vs. Melo .

So in one corner we have a very good player who’s underpaid, and in the other we have a mediocre player who’s vastly overpaid and will soon be even more overpaid.  I often think (and say and write) that things can’t get any worse for the Sixers.  When they show a willingness to enter into a trade like this, I’m humbly reminded that things can always get worse.  And as I type this, the Nets are apparently withdrawing from the Melo-sweepstakes, so it looks increasingly likely that they will.

Hopefully this doesn’t go through, as it would be yet another instance of the Sixers choosing form over function.

Not only is Iguodala objectively more productive than Melo, he’s cheaper.  A lot cheaper.

But in today’s NBA snitches get stitches and scorers get max-deals.