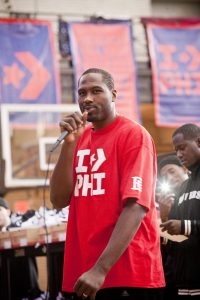 Our memories are unreliable historians.

This is why Philadelphia area resident (And we asume frequent Philadunkia.com visitor) M. Night Shyamalan is a tragic figure.  The putridity of his last three movies has overwhelmed remembrance of the legitimately good, maybe great, stuff he did earlier in his career.  He’s an idiot, we now say reflexively, dismissively, as though he were never anything but.

It’s like the way a painful breakup renders you not just unwilling, but in some ways unable to fondly remember the better times: the canoe trip, trying to put together a desk, or that time you rented Signs.  Post-facto, when you stumble into one of these memories you meant to stash in some out of the way hippocampal groove, rather than enjoy it you mine it for signs of dysfunction, the fall that’s to come.  This mining distorts the memory and in doing so not only robs a piece of personal history of it’s proper due, but actually rewrites that history.  This is how Lady in the Water, by the sheer gravity of its terribleness, has ruined Unbreakable.

And it’s how Elton Brand’s last two seasons, by the sheer gravity of their terribleness, have started to ruin Elton Brand.

This is a bummer not just because he’s a nice guy who’s fallen on hard times (Ok, he’s made well over $100 million to play sports, not that hard), but because his first eight years of professional basketball were extraordinary.  And regardless of how the story ends, they deserve to be remembered accordingly.

These were my thoughts Saturday at Converse’s launch party for Brand’s new EB3 signature basketball shoe (available exclusively at JCPenney!) where I was waiting my turn to get at his ear.  When I got it I asked him about his fall from the top, what he’s doing to get back, and what’s happening with Evan Turner. After we went our separate ways, he gave 100 pairs of his sneakers away to some inner-city kids who were waiting on the court downstairs. Like I said, he’s a nice guy.

Q and A after the J. 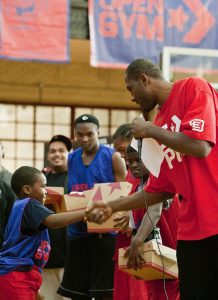 How do you feel physically?

Brand:  It’s been a few years. I had the Achilles and right after it the shoulder, so the rehab is very tedious, along with working out. But I’m re-energized and I feel good

What facets of your game did you work on this offseason?

Now that Sammy’s gone you’re the lone veteran on the frontcourt. Have you embraced that leadership role?

Brand:  It’s a new position for me, being the elder statesman on the front court.  Tony Battie is there, and he helps.

When you’re out on that court, you’re always looking for Sam to block a shot, or get a rebound, and he usually does.  Offensively he sets picks and shares the ball – he doesn’t shoot it that much – but defensively, when you need a rebound, you know he’s gonna be there.  That’s why I have to step up my game: getting more rebounds, getting more blocks, stuff like that. 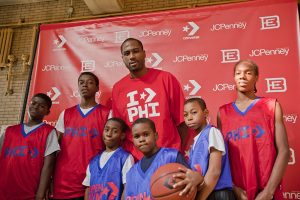 Where are those rebounds going to come from now?

Brand:  Yeah.  Sam’s not gonna get them.  So I’m down there, and we’re gonna have to box-out and team rebound now.  Ever Turner’s gonna get 5,6,7 rebounds a game.  Andre Iguodala, Thad, myself: We’re all gonna have to step up and pick it up

What’s going on with Evan Turner?

Well, when you came in, things were a little smoother for you

Brand:  Not in the preseason.  My first game I played against Alonzo Mourning and PJ Brown and they kicked my butt.  I had six points. You know? I didn’t have twenty.  So it’s a great learning curve.

How are things going with Doug Collins?  You glad to be rid of the Princetonoffense? 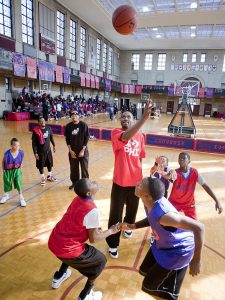 Brand:  Haha, yeah.  He has a great wealth of knowledge.  It’s kind of eerie hearing him in practice, I think he’s on TV.

Some people are picking this team to make the playoffs.  Is that realistic, or are you a year or two away?

Brand:  It’s absolutely realistic.  You’ve got Miami, Boston, Orlando – the upper echelon teams – and then I think we should be right there with everyone else. (We’re there) talent wise, and I don’t think we can be out-coached on any night.  So we just need to put it together and I think we can do that.

Your first couple years in Philly have been really tough.  What’s happened?

Brand:  It has been tough.  Injuries of course, coaching decisions, things like that (were factors).

I’m always a positive person, and I’ve been in this position before.  When I was with the Clippers we were down, and then we had the best year the organization’s ever had.  I had my best season.  So I know we can turn this around.  We just have to stay positive and be optimistic.  As long as you have that optimism inside, that will help you work harder and get there.  It’s been tough, but I think the fans will turn around and embrace us once we start winning.  I know it can happen. 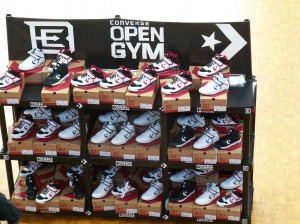 You were one of the top players on the planet for a long time.  A top ten, top fifteen guy.  Is it hard not being one now?

Brand:  At the time when I had the injuries it was tough, but then you start chasing to get back to that level. Now that I’m healthy, I feel I can get at least close to that.  I feel it now in practices.  Today I had a great practice….I was an All-Star, I was a second-team All-NBA player, and now it’s coming back.

What are your goals for the rest of your career?  How much longer do you want to play?

Brand:  I’ve got two, three more years on this deal.  I just want to try to keep Philly in contention and do what I wanted to come here and do.  At least get us back in the playoffs, at least have a good feeling with the city.  You don’t want to leave a bad taste. ‘Ah man, this guy came here and just (took money).’  We want to turn it around and feel good about it.  And leave that heart.