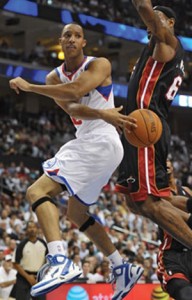 In the much-anticipated NBA debut of Craig Brackins, the Sixers fell to the Heat by a dime.

Evan Turner, preseason and summer league be damned, played really good basketball.  He overcame Doug Collins’ start-Kapono-diss (I hope Doug’s sufficiently recovered from his concussion to learn his lesson on this one, though given the fire it lit under Turner, maybe old man Collins is craftier than we give him credit for.  Crazy like a fox!), made Dwyane Wade look like Wade Phillips with an absolutely devastating cross-over to twenty footer in the third, and led the team with sixteen points.  And for you efficiency-mongers, he managed to score those sixteen with only three missed shots and two turnovers.  What else did he do?  Oh, just grabbed seven boards, dished out four assists, and –and this is probably the best part– flat out looked like a guy who was the number two pick in the draft.  And after an exhibition season where he looked like a guy who didn’t know what kind of guy he was supposed to look like, to see him banging with two of the three best players in basketball like he belonged, was a welcome sight. “He’s a gamer,” said Doug Collins, just now through my television.  Agreed.

“Our starters aren’t our best players,” Collins voice added, “So don’t get caught up on it.”

Ok Doug, but what I am going to get caught up on is that our boy Turner looked, dare I say it, athletic.  He’s a polished, but ultimately low ceiling guy, the Turner’s-a-mediocrity rhetoric went.  You can only get so far with a guy like that.  False! He’s got hops, and he can create off-the-dribble not just against your run of the mill NBA wing, but against the crème of the crème-de-le-crème.  We chose wisely with this one.  Thank god.

On the rest of the good news front, Thad Young looked spry and occasionally kinda nasty (6-8 from the floor and a thunderous dunk) and Andre Iguodala, while only scoring ten points, held Lebron to 16 on 5-12 shooting and did a better than nice job grabbing boards and getting out on the fast-break. 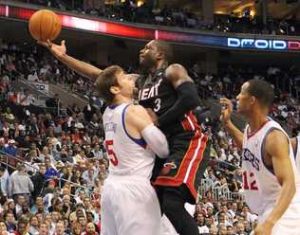 Jrue Holiday was awful.  After the preseason proclamation that he would be playing 35 minutes a night, every night (and that he would be a top-five PG sooner rather than later) Holiday played 21 minutes, only eight in the first half.  He was 2-9 from the floor, and turned the ball over five times on only three assists.  And on the other end, Dwayne Wade ate him up to the tune of 30 points.

“I let down myself tonight, my team, and most importantly Tom Sunnergren, a funny, handsome, sports blogger who really believed in me,” he told Dee Lynam after the game.

Mo Speights was also a disappointment.  He played a whopping three minutes, failed to grab a rebound, and went 0-3 from the floor.  The Sixers went small throughout, but still –three minutes? Bizarre. We’ll get to the bottom of this.

As it was throughout the 2009-10 season, the Sixers perimeter defense was a disater last night.  Miami stroked 8-16 from deep and the Sixers made Heat reserve James Jones look like the second coming of Reggie Miller — 6 of 9 on 3PAs for 20 points.  Missed rotations were common place as was simply leaving Heat players wide open for no reason at all.

The Sixers entire first-five went to the FT line zero times in the entire game!  Zip, nil, none, nada.  I’ll say it again, because it is so unreal…Last night there wasn’t a single attempt from the charity stripe by Brand, Kapono, AI9, Jrue or Hawes.  That has to change.

All-tolled, it was an encouraging start to the season. The Heat are possibly the best collection of athletes I’ve ever seen on any team in any sport in my lifetime, and we, at moments, looked like we belonged on the same court as them. I’ll take it.

In case you missed the game last night, we have some pics of Meredith below and you can follow her on Twitter — @M_Marakovits. 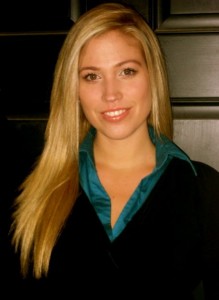 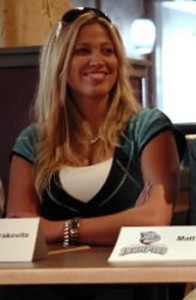