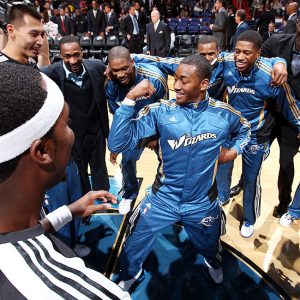 Two presumed basement feeders of the Eastern Conference fought their little hearts out Tuesday night in the Verizon Center, with the Washington Wizards walking off the court victorious over the 76ers. Washington kept last season’s trend alive (they swept us three games to none in 2009-10) in dramatic fashion last night, just clipping the Sixers 116-115 in overtime.

Philadunkia.com is one of the leading websites dedicated to covering 76er basketball, but I wouldn’t be doing the sport justice if I didn’t lead off this post commending the astonishing performance from Wizards rookie point guard John Wall.

A colleague of mine at the game said you could feel electricity in the crowd for the first time in several seasons. Wall poured in 29 points (from all over the court), 13 assists and a mind-boggling nine steals, most of which led to easy transition points for Washington.  Wall’s speed and body control on drives to the bucket look even more polished than his days in  a Kentucky uniform.  Wall’s chemistry with off guard Nic Young is also an encouraging sign for the DC faithful.

Tuesday night in Washington DC proved how much of a can’t miss prospect Wall actually was.  Evan Turner was quiet all game until it mattered in the fourth quarter, where he scored eight of his nine points, an encouraging sign to go along with his six boards in 28 minutes.  But how long do you think it will take ET to come close to Wall’s triple-double numbers, even if it was something he pulled off at Ohio State quiet often? 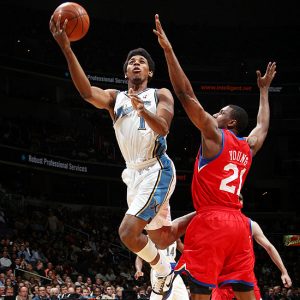 Maybe he could start producing sooner than we had hoped for.  The 76ers bench last night scored 62 points and it looks like newcomer Spencer Hawes may soon be relegated to a bench role.  The starting center played just 16 minutes and went for four points and 1 rebound.  That’s right, a seven-footer grabbed one board in 16 minutes of NBA action.  After four straight losses it’s time for Collins to tinker with the lineup by putting Iguodala at the three.

Collins kept a shorter lineup in featuring Elton Brand at center for a majority of the game.  Wizards coach Flip Saunders took advantage of the obvious mismatch in the second half and Washington kept feeding the ball to Andray Blatche.  In turn the 6’11” athletic big man went to town on Brand posting 23 points on 13-of-14 from the free throw line.  Washington was so adamant about Blatche’s advantage they even went to him with eight seconds left in regulation (the assumed last shot).

Blatche blew by Brand and may have gotten help from the official on a sketchy call (at best).  Two things here.  Where was the weak side help from Evan Turner with the game on the line?  And two, if Andray Blatche is doing things like this to Elton Brand, Philadelphia is in a world of trouble.  The Washington frontcourt situation is almost as bleak as the 76ers, yet they were still able to adjust their game plan.

There’s some other reasons why Philadelphia has started 0-4 for the first time since 2001-2002.  The Sixers had the Wizards right where they wanted them after a deep three from Lou Williams, putting us on top 96-90 with just over two minutes remaining.  We may need to get a fire extinguisher for Williams whose hot streak became even warmer with the 30 points he dropped Tuesday night.  Williams was handling the ball over Jrue Holliday in the fourth and overtime.  Collins even drew up the final play for Williams, something I question over Iguodala or even Brand on the wing.

Solid teams are able to hang onto those leads on the road through good perimeter defense.  Well, Philadunkia’s home team dropped the ball and let Washington sink a few three’s including Cartier Martins prayer at the end of regulation to force overtime.  That bucket really took the wind out of the Sixers sails.

Statistically the 7-6 had one of their best nights all season.  They outscored Washington in the paint 50-36, shot 55 percent from the floor compared to the Wizards 47 percent and even shut down a seven-footer in JaVale McGee.  For the second straight game though a sloppy third quarter derailed the momentum.  Washington went on a 12-2 run in the middle of the quarter, probably the burst in the game where Philadelphia can look back on and blame the loss.