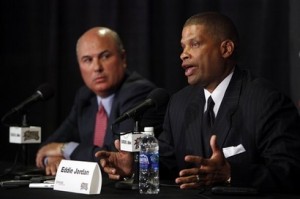 As Eddie Jordan walked up to the Sixers podium in the press room he wasn’t a man who was nervous but a man who was calm, collected, and ready to take this young Sixer team to the next level. Sure on the surface the signing of Eddie Jordan seems like Ed Stefanski just took the safe road and signed his well accomplished buddy who was out of a job, but Sixers fans will come to realize that this was one of the greatest moves the organization has done in years. Jordanis big on X’s and O’s and he is a very vocal and charismatic coach, something the Sixers haven’t been used to seeing in a long time.

Eddie Jordan is not just a Sinbad look-alike, he is a great coach. As an assistant for the New Jersey Nets, Jordan coached the team to consecutive Eastern Conference Championships in 2002 and 2003. When Jordan later took a head coaching position with the Washington Wizards he led the team to four straight playoff appearances from 2004-08 before getting fired last November after the team started the season with a 1-10 record.

The word which Jordan used a lot during his press conference was “team”. For a supposed team which tore apart at the end of this season, that is a word that must be a point of focus during the off-season. Players were throwing blame in all the wrong places and the quiet locker room we all thought the Sixers had turned into an army test base. Even team leaders like Andre Iguodala and Andre Miller were firing off rounds. One of the ways in which Eddie Jordan thinks the Sixers will become a “team” once again is through the use of the Princeton offense.

“It promotes team concept. It enhances the players who aren’t great scorers, and it makes great scorers help their teammates”, said Jordan. “It’s about cutting, passing, and getting quality shots. Certainly it’s about all the other parts of basketball where by the end of the possession you’re looking at a quality shot.”

If the team mentality gets through to the players than Jordan thinks that players will thrive in the offense and stars will become superstars. He also believes that the youth has grown up and are now ready to accomplish great things. 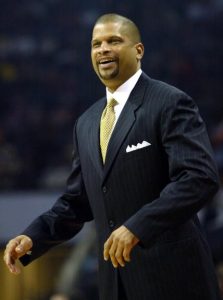 Another main focus in the conference was about the future of Andre Miller. July 1st is the date where the Sixers are allowed to talk to Andre about resigning and both Eddie Jordan and Ed Stefanski pointed out that they are hopeful that he will return to the lineup next season. Jordanalso pointed out that a team doesn’t need a true point guard to be successful as long as the talent is there. He made reference to the 6-time champion Chicago Bull teams with Michael Jordan and Scottie Pippen stating that there was no true point guard on those teams, yet they used talent and smart decisions to win.

Ed Stefanski made it clear why he hired Eddie Jordan. He believes that outside of his coaching record Eddie really pushes his players and staff.

The most brilliant line of the press conference came late from Eddie Jordan into the microphone. In a city where sports are as big as a slice of Lorenzo’s pizza or the waist of a South Philly bar regular, Jordan gave praise to the sports town. He also took a shot at our neighbor in the process.

“This is the ultimate challenge for me in sports. People say that if you can make it in New York than you can make it anywhere, but that’s Broadway. In sports this is it and I’m at position in my life and experienced enough to say this is the challenge where if I can make it here than I can retire and move to Florida like Billy Cunningham.”

Philadelphia is the toughest sports town in America. If you are successful here you will be loved and remembered, but if you slip up than you will be criticized and forgotten. It’s been a long eight years since the Sixers were playing in the NBA finals, but the Sixers brought some excitement back to the city the past two years by beating the odds and taking 2-1 leads against two of the top teams in the Eastern Conference. It’s Eddie Jordan’s job to make the third time a charm and make the Sixers team next year finals bound once again. The city of Philadelphia will be waiting.