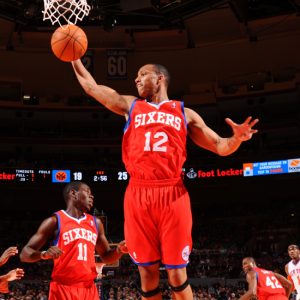 The very second after the final horn had sounded in Madison Square Garden, Sixers Head Coach Doug Collins was fist-pumping, smiling and high fiving all of his fellow Sixers.  The 76ers (2-5) snuck one past the sleepy New York Knicks early Sunday afternoon, on the road, without Andre Iguodala and snapped New York’s semi-decent two game winning streak.

Collins had every right to display his obvious pleasure with his team’s performance.  All game long I kept murmuring to myself how improved New York had looked with the changes they’ve made — Felton’s shiftiness, Russian center Timofey Mozgovis improving each game and as active and quick for his 7’1” size, Anthony Randolph is a project who could flourish under Head Coach Mike D’Antoni and of course Amare is Amare.

And let’s stress this: the Sixers were victorious 106-96 without Iguodala, someone who has started the last 252 games, the second longest active streak in the NBA.  For a guy of Iguodala’s star status to not take one day off for over three seasons shows you how committed he is to turning this franchise around.  Let’s hope this Achilles tendinitis will not slow him down for long.

Only 36 of the Sixers 106 points came from inside the orange paint at MSG.  Teh Sixers were shooting lights out and again Elton Brand led the way with his 20 points on an incredible 7-for-11 from the floor, scoring 12 points in the opening period.  It’s the first time Brand has scored 20 points in four straight games since he was a Clipper in 2006.  Brand’s shooting touch has been impeccable early on in 2010.  Even though Amare Stoudemire outrebounded Brand 15 to seven, Elton held his own especially in the first half to help the Sixers stay afloat.

New York is well-known for their up-tempo style of play and to my surprise the 76ers not only kept up with the Knicks when they had too, but they also forced New York into may half court sets.  The Knicks aren’t the type of team who can play well when the shot clock is clicking down.  They panic and force up deep outside shots.  Philadelphia’s quickness to get back in transition defense stifled New York who shot 3-of-19 from downtown and shot 40 percent overall from the field.  The Knicks only scored 15 points in the final quarter

Jrue Holiday has been performing beyond all expectations the last three games of the young season and he continued that roll today in NYC.  Holiday’s passes have been crisp over the last four games.  His aggressiveness in the lane is leading to more trips to the foul line and of course more points.  And he’s also protected the basketball and did so again Sunday committing just two turnovers in 42 minutes.

But against the KnicksHoliday finally flashed his outside shot for the first time this season.  Holiday drilled four of his five three pointers, stroking his last deep jumper with 3:28 left in the fourth quarter, putting us up 98-94.  The 20-year-old finished with 19 points and eight assists.  Holiday’s defense pushed Raymond Felton off his game.  The Knicks point guard only managed seven points.

Early on the Knicks tried to pressure the small Sixer lineup with a full court press.  Evan Turner was actually handling the ball a decent amount and received his first ever NBA start at the two guards. After a slow start (I wrote in my notes ET needs to stop hesitating) Turner snatched 10 rebounds along with his 14 points.

Defensively in the second half the Sixers pulled out a zone against the Knicks, forcing a clearly bored offense to continue their shooting woes.  Turner did a nice job along the wings; not only crashing the glass but using his hands to alter passes.  He did turn the ball over five times himself.  But these 35 minutes against the Knicks were some of the best of his career.

Has there been a better player off the bench so far this season than Lou Williams?  Lou’s averaging just 25 minutes a game this season but his 17.7 ppgsecond on the team.  Even in a game where his shot was counterproductive (3-for-12), Sweet Lou was able to convert 12 of his 14 free throws.  We know he can’t play a lick of defense and his decision making has been suspect at times, but you can’t question the offensive punch he has provided off the bench.

The Sixers last two losses came in the worst variety possible.  On Tuesday night, a lucky fourth quarter desperation three from the Wizards led to a Washing overtime win.  Then a Philadelphia defensive meltdown cost them the game Friday night against Cleveland.  Things seemed headed that way when the Knicks took a nine point advantage late in the third, but Sunday afternoon Doug Collins’ bunch proved resilient without Iguodala.  What if the Sixers continue to play well without their “star” in the lineup?  It’s definitely something I’m keeping my eye on.