I know what is about to follow may seem odd to write with just four games remaining in the 76ers regular season schedule, but there’s just something I have been holding in side for a while now and after last night’s debacle in Chicago (which we’ll ignore by the way) I have to get it out or I may cause myself serious physical harm.

It’s time for someone on the Sixers to grab this squad by the straps, hoist them on their back  and carry them on a winning streak. It’s hard to believe after 78 games in the long NBA season, but these last four contests will ultimately determine how the Sixers fair in this post season. Therefore I am requesting…no wait, I am begging…scratch that, I am demanding that someone show some stones and leadership skills on this team, assume the role of “The Man”, pick this team up by the straps and carry it on his back for a run that will allow the Sixers to avoid the dreaded 6, 7 or 8 seed in the East and actually build some momentum going into the NBA playoffs. In short, I need a hero.

Now with games vs. Clev., @ TOR; vs. BOS and at Clev., remaining on the regular season schedule, this will not be an easy task and the player who assumes this role must have the skills to command enough respect from teammates that they will follow his example, but more importantly he must have the heart and desire to take on the challenge.

That is why I can not believe that I am calling out “Mr. Inconsistent” himself Andre Iguodala, and assigning him with this task. But I have no choice. Iguodala is the highest paid player on the floor and has tone of he longest tenured 76ers on the roster, so for me he has to be the go to guy. I know he’s let us down on several occasions in the past, but I have faith he can pull this off. I mean it’s only four games of giving everything he’s got inside and absolute domination that I am asking for here. How hard for Andre could that possibly be?

Well if you look at the last 2+ months of the season, you would say it would be very hard, difficult or perhaps even impossible for Andre to save the day. The guy has not strung four solid games in a row since January. Sure there have been times in February and March where ‘Dre has played very well, but lately he’s been unable to assemble a run of games that makes you believe he will ever be able to elevate this team to anything more then a hovering around .500 squad. Iguodala always manages to throw a dud in there to make you shake your head and wonder why the Sixers gave him that big fat 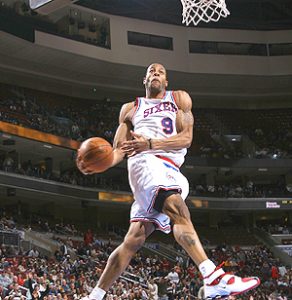 contract this past summer.

Take for instance his 12 points and 2 rebounds effort against Miami on February 7th. Or look at his 10 points and 2 rips night vs. Denver of February 18th. There’s also February 27th when Iggy went for 15 & 7 at New York. Most elite players raise their games to unbelievable heights on the Garden floor, but #9 for the Sixers, well he fell short of his season scoring average.

Just a few more tough to read bits of evidence…In early March Andre hit for 30 against the NOH and 24 against the Grizz, then went for 9 on the road against the lowly Thunder. After three straight 20+ point games, including a 25 point outburst against the Lakers in which he hit the game winning 3-ball, Iggy lit up PHX for 11 on March 18th. C’mon, I could score 11 points against the Suns. There’s the 15 point on 4-14 shooting performance against MIN on 3/25 and the 6-13 effort that led to 19 points against the Hawks a week later. Finally there’s the most recent and arguably the finest example of  Iguodala’s rollercoaster last two and a half months of the season. On April 5th, Iguodala followed a 31 points and 9 rip night at Detroit that led the Sixers to a must have road W over the Pistons, with a 5 point (1-8 on FGs) egarbage ffort in a  blowout loss at NJ that ended the Sixers three game winning streak.

Now despite all this evidence that says he can not put together four big nights in a row, I still have faith that our $80 million man can pull this off. I’ve seen the flashes of All-Star level game splashed in between the above listed nights of disappointing or sometimes dreadful effort and I am clinging to those performances for our playoff lives.

So Andre, its’ time to wake up, because I am putting this charge on your shoulders and demanding that you go out there and dominate, snatch up the 5th seed for the Sixers, gather some momentum for this team along the way and dispense with the haters that say you are nothing more then a solid NBA player who will never be All-Star in this League.

Andre, go out there and be a freakin’ hero.