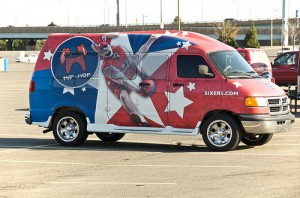 One Game Down, Four More On the Road

Without leader Andre Igoudala on the floor the 76ers took over Madison Square Garden and pulled out a 106-96 victory over the New York Knicks on Sunday afternoon.  Jrue Holiday and Elton Brand carried this team across the finish line on the first of five tough road games.

The Sixers face a daunting remaining road trip withmatches against the Thunder, Mavericks, Spurs and Cavaliers.  This is one of the toughest stretches on the slate at such a young part of the season and could be devastating to our season if we don’t sneak out a win or two or three.  Each team won over 50 games last season and was featured in the NBA playoffs.  Obviously, the Cavaliers are missing LeBron James but have still been competitive at 4-3.

Worst-Case scenario: 0-4 or 1-3 with the only win coming against the Cavaliers.

Let’s discuss the next four opponents on this vital road trip.

With AI9 out for tonight’s game against the Thunder we will see rookie Evan Turner in his second start.  Turner will go up against one of the youngest core rosters in the NBA featuring point guard Russell Westbrook and all-star Kevin Durant.

In the last year Durant has catapulted himself from the best on his team to one of the top five NBA players in the League.  It all began with his capturing of the NBA scoring title, scoring 30.1 points per game, and ensued with leading Team USA basketball in the FIBA Basketball World Championship to a Gold medal.  With Durant you have to be physical with his lengthy frame but be aware not to be overaggressive.  Durant averaged 10.2 free throw attempts a game last season — best in the league — while knocking down 90 percent of those.

Even though he is not playing up to his usual All-Star standards right now, stopping Durant is near impossible, but containing him will be key.  His Thunder have been unpredictable in the first six games and are 3-3.  They squeaked by victories against the Pistons and Trailblazers by one and lost their last two games at home handily against the Jazz and Celtics.

Hopefully the Sixers can hand the Thunder its third home loss of the season.

Watch out for the frontcourt of the Mavericks including Dirk Nowitzki, Tyson Chandler (double-double vs. Boston Monday night) and Brendan Haywood against the weak Sixers bigs (Hawes, Speights and Battie) and the reemerged star Elton Brand.  The length and height for the Mavericks should give us trouble and head coach Doug Collins will have to steer clear of his smaller lineups where he features Brand as his five like you witnessed late against the Wizards.

Also, keeep an eye on guard Jason Terry who has been lighting it up from downtown, connecting on 52.2 percent of his three point attempts.  In two games against the Sixers last season Terry only scored 11 points in 68 minutes played.  However, Terry did deliver a game winning shot against the Sixers at home with 1.7 seconds remaining in one of those two contest.

In the other match in Philadelphia, Thaddeus Young willed the team to victory with 22 points after being benched by former coach Eddie Jordan.  Terry and the Mavericks didn’t play their best basketball against us last season and split the series.  However they are currently 4-2 and coming off a huge win vs. the Celtics on Monday night.

This is a big test on Friday Night and hopefully it’s a game that the 7-6 (boosted by the return of AI9) can steal against an opponent who may be looking ahead to their huge contest vs. the NOH on Monday, November 15th.

From one veteran Western Conference staple to another, the 76ers play San Antonio directly after facing the Mavericks.  It can be extremely challenging on an NBA team to play back-to-back games against formidable opponents, especially on the road.

The Spurs have won four straight against the Clippers, Suns, Rockets and Bobcats.  They will face the Clippers again Wednesday night before getting a rest until our Saturday showdown.  San Antonio has seen an excellent balanced attack from their veteran core.

The core four of Manu Ginobli (21.3 ppg), Richard Jefferson (18 ppg), Tim Duncan (17 ppg) and Tony Parker (16 ppg) have given the Spurs the league’s second best team assists per game at 25.5.  The balance on offense will be a major mismatch for our 76ers.

Look out for youngster forward DeJuan Blair.  In his rookie season for the Spurs he dominated the offensive glass against the 76ers tallying seven offensive rebounds and 11 points in a home 97-89 victory, but he has struggled mightily early on after being pronounced a starter for the Spurs.  Also Richard Jefferson has improved his outside shot (52% on 3PAs in 2010-11) enabling the Spurs to really spread opponents out.

This is the victory we must have!  Yes it is very early into the season and hard to claim we ‘must’ have a game, but think about it.  Look at the first three opponents, on paper we are inferior to those teams.  The Cavaliers are our best chance at gaining a victory on this road trip.

Obviously the Cavslost their ‘King’ but they still managed to pull a victory from the Eastern Conference Champion Boston Celtics in their first game.  With the win we saw the great potential of athletic forward J.J. Hickson who had a game high 21 points.  Hickson has been impressive with 16.5 points and 5.5 rebounds per game in his first six.  Hickson was seldom used in the postseason and former coach Mike Brown took some heat for his limited exposure.  Expect to see a lot of him next Tuesday.

Finally, I must give credit where it is due with the Cavs undersized backcourt duo featuring Daniel ‘Boobie’ Gibson and Mo Williams.  In wins the two have combined for 43 points, 9.7 assists and 3.5 steals a game.  On the defensive side of the ball though, the Cavaliers should struggle against the likes of Andre Igoudala and Evan Turner at the two position.