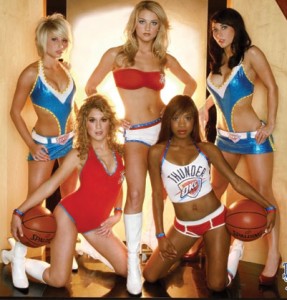 This edition of “Fo’ with the Foes” — Philadunkia’s advanced scouting series which with the help of an accomplished journalist from around the NBA beat or blog world, previews upcoming 76ers opponents — features tonight’s opponent, the young, talented and highlight reel making Oklahoma City Thunder who are the foes for game two of this five game road trip.

This is going to be a very interesting game featuring two very young, athletic teams that shoot the rock in the average to poor range and play two completely different styles of ball.  OKC values defense and has a bona fide, go-to NBA superstar in Kevin Durant to rely on when they need big buckets and this squad believes in the system head coach Scott Brooks runs.  The Sixers play little defense and are a “star-less” squad on which you never know who is going to hoist the big shot during a given game.  Plus this roster is still learning the system installed by new head coach Doug Collins.

However, even though on paper our home team appears to be an underdog in this one, we think the Sixers may have a chance to pull this one out.  Stop laughing for a second a take a look at our reasoning.

Standing at 3-3, the Thunder have lost at home on back-to-back Sundays and have been a bit of an enigma early on this season.  Durant has struggled in all facets of the game – for KD that is.  Their shooting percentage from deep is an NBA worst 21.2%.  Meanwhile, they’re allowing opponents to hit at 41.8% — also worst in the League.  Jeff Green is banged up and questionable for tonight’s game and Russell Westbook has not played up to his 2009-10 level.  Plus there are a ton of expectations on this young group who could be feeling a little pressure to produce.  In short the Thunder are a mess right now, so the 7-6 could not be catching them at a better time.

In addition to all that currently plagues the Thunder, the 76ers actually have played solid basketball for long stretches early this season and they appear to be better then their 2-5 record.  Coming into tonight’s game, Holiday is on fire, Brand has posted four straight 20 point games, Louis is contributing off the bench, Turner is coming off a double-double and Nocioni appears to be finding his form again.  If it wasn’t for a slew of late turnovers against the Cavs and a ridiculous 3-Ball from Cartier Martinof the Wiz, the Sixers would be 4-3 right now.

Look we’re not saying the Sixers are suddenly a great basketball team, we’re just saying Philadunkia’s home team stands a better chance of winning this game then you think.

For a little more insight into the Thunder team the Sixers face tonight, we turn to our man Royce Young from dailythunder.com to answer two questions on the Thunder from us here at Philadunkia as well as provide us with two points of analysis on this OKC squad from an insider’s perspective.

Philadunkia :  The Thunder have become the darling team of the NBA and a lot of the forecasters are predicting big things for KD and the rest in 2010-11. So how is Scott Brooks going to keep this team level headed and focused on the task at hand? Royce Young @ dailythunder.com : I don’t know if it’s so much Scott Brooks that will influence that. The team itself is actually pretty good at self-policing that. They may be young, but Jeff Green, Russell Westbrook and Kevin Durant are level-headed guys and natural born leaders.

But Brooks helps keep the team loose because he doesn’t take a lot of stuff that seriously. He’s great with the media, always says the right things and keeps his guys thinking about basketball and not the outside influences.

Philadunkia :  The Thunder is one of the better defensive teams in the League. The Sixers are one of the worst. To be honest they’re actually pathetic and Durant may score 50 on Wednesday night. What has former Sixer Scotty Brooks done to get the OKC young team to buy in to the importance of defense and can he teach Eddie Jordan how to do it?

Royce Young @ dailythunder.com :  I think Cheeks was huge in Russell Westbrook’s development last season. Most felt that Cheeks was actually hired to sort of serve as Westbrook’s personal develop coach.

But in general, Cheeks has been a great assistant because he fits well with Brooks’ philosophy and he’s a relaxed teacher instead of a real in-your-face guy. I think the Thunder react well with those type of coaches.

1) Through the first six games, OKC is last is assists per game and assists percent age (assists per field goal made). They aren’t moving the ball, they aren’t spacing on offense and they aren’t getting clean looks for scorers.

Defensively, they are there at times, but it’s not consistent. Against the Celtics, they were horrible in the first half, giving up 58 points on 55 percent shooting. Then in the third quarter, they locked down holding Boston to 15 points and without a bucket the last five minutes. It’s just kind of all a mess right now.

2) Jeff Green sat out Sunday’s game against the Celtics and Serge Ibaka started in his place. Ibaka was solid in his first start, but Green’s offensive impact was missed. He’s listed as day-to-day but it would be helpful to the Thunder cause if he returned sooner than later.

Our thanks to Royce Young for his insights.