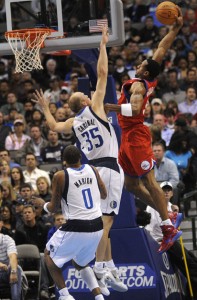 Heading into the fourth quarter last night’s game was competitive with the 76ers trailing the Mavericks 78-75.  We were fighting, scrapping, not in great rhythm but getting the job done by attacking the basket.  We hung around and I was convinced the game would come down to the final minutes.  What’d we do?  Nothing, at least it seemed like nothing.

After a Tony Battie two pointer, in his first appearance of the ball game, the 76ers allowed a 10-0 run early in the fourth.  The game was out of hand from there on out.  They would make the score look more respectable losing 99-90, but the truth is the Sixers were duds in the fourth.  In fact, statistically speaking, it worst fourth quarter this season with only 15 points on 5/17 shooting from the field.

What bothers me most is Philly played well in the first three quarters.  Yes, it wasn’t pretty, but we had 46 points in the paint heading into the fourth.  Dallas is clearly a superior team, maybe the second best out in the West besides Los Angeles and we were hanging with them.  The Mavericks post players are lengthy and they gave us trouble all game but we held our own despite the mismatch on the interiro.  And then the fourth came along and our squad collapsed.

Now we move onto the San Antonio Spurs on consecutive nights.  The Spurs have great size in the frontcourt and should provide problems as well.  Mavericks center Brendan Haywood had nine offensive rebounds.  Against the Spurs the 76ers have to get out and run the floor.  Only seven points in transition is unacceptable for this young franchise, it’s pretty clear they are not a good half-court team.

If the Sixers want a shot at the Spurs, franchise star Andre Igoudala needs to show up.  Returning after missing two games with tendinitis in his Achilles, Igoudala had two monster jams.  He closed the half with his first dunk and another over Mavericks forward Brian Cardinal which resulted in a blocking foul and a free throw attempt after.  However, where is the AI9 that we know?  In his seven games played this season he has produced these scoring totals: 10, 27, 12, 12, 11, 7 and 13 points last night.  AI9 where are you?  Who are you?  Where can we find the real you?  This team needs you to be the GUY.

I’m confident Igoudala will pick it up.  There is a long season ahead, maybe he just needs to get over the tendinitis issue?  While he pushes the pain aside, point guard Jrue Holiday is getting better by the game.  Holiday had 13 assists tying a season high and tallied 11 points giving him his third double-double of the year.  He had some help from role players Thaddeus Young and Andres Nocioni.

Young played well off the bench with 17 points, but was lackluster at times defensively.  His fellow bench-mate Nocioni should stay seated at tip-off for each game.  In the three games he’s come off the pine he’s been in double figures scoring by the end of the night.  Nocioni played great in the first half with five points right after being subbed in.  He also started the second quarter coming up with a nice block and steal defensively followed by a three pointer at the other end.  But with his talents on the bench it presents a problem with the starting lineup.

Just look at our starting lineup tonight: Jrue Holiday, Evan Turner, Andre Igoudala, Elton Brand and Spencer Hawes.  Turner and Brand are too similar.  With both of them on the floor at the same time, we lack a shooter to stretch the court.  Nocioni, Kapono and Meeks are our other options, yet none of them are true starters in this League.  Head coach Doug Collins claims he isn’t worried about who starts the game but rather who finishes.  However, you never want to dig yourself a hole in the first quarter.  When pieces of the starting lineup were pulled from the game last night, the Sixers were behind by seven.

The streaky Lou Williams has established himself as the sixth man for this team but was extremely quiet on the night thanks to his shoulder injury.  Williams only played for 10 minutes and only attempted three field goals resulting in two points.  He was subbed in with 2:53 left in the first along with Center Marreese Speights.  Speights quickly picked up three fouls and was pulled in the second.  He never saw the floor again.

The five position continues to plague this ball club, but tonight Hawes was impressive on offense.  He played his best game of the season with season-highs in points (14), rebounds (5) and minutes (24).  Consistent production from Hawes would be welcomed, but expecting it is idiotic.

The 76ers travel within state borders to face the Spurs tonight.  Facing Duncan, Parker, Jefferson and Ginobli will be a big challenge.  We need to play a full 48 minute game, unlike tonight’s three-quarter performance, continue to attack the basket and push the tempo on offense.  Sneaking a victory from the Spurs would be crucial on the daunting road trip.

NBA.com has the highlights of the Sixers L in Dallas last night.