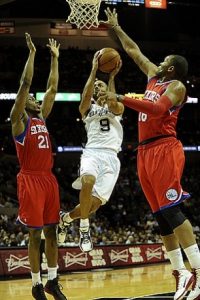 The final tally: A 23 point loss to the Spurs.  And 23 points makes it seem closer than it actually was.

Pick your poison of the listed vocabulary my fellow Philadelphia fans, because every single word describes the 76ers ugly and embarrassing display Saturday evening in San Antonio.

The horrific display of basketball started right from the get-go, with the Spurs going on a 20-2 run midway through the first quarter.  The Spurs poured in a season high 39 points in the opening flame.

Before every game I cover, I highlight a couple of matchups to focus on.  I keyed in on the Spurs experience in the backcourt and the championship veterans surely didn’t disappoint.  Tony Parker and Manu Ginobili ate away like mosquitoes at Jrue Holiday and company, pestering the Sixers defensively and biting them on offense.

Parker had 24 points and his precision passing was at its finest.  The way Parker can get into the lane with such ease goes to show you why he has multiple title rings on his hand.  And Manu added 18, embracing his new role as a starter. H e is the Spurs best shooter and can pull-up or hit a spot-shot from deep.  Oh by the way, none of the Spurs starters played the fourth quarter.  At all.  San Antonio closed the game with Chris Quinn, Gary Neal, Alonzo Gee, Matt Bonner and Tiago Splitter on the floor.  Yeah, it got that ugly Saturday night.

There were a bunch of unattractive basketball moments in the game. The 76ers looked like a bunch of individual performers not on the same page.

Probably the most hideous of any sights on the court was Evan Turner’s zero points.  Turner only hoisted up three shots but that was exactly his problem.  He seemed withdrawn from the game and I counted only two times where he put the basketball on the floor and at least made the attempt to get inside the paint.  The majority of the season ET has shied away from slashing to the hoop, a trademark of his with the Ohio State Buckeyes.

In the Orlando Summer League, Turner wore his emotions on his sleeve, something I noticed again against the Spurs.  I know the fourth quarter was a blowout, but ET did not even want to be on the floor.  In fact it kind of felt and looked like he was entitled not to be on the floor, due to his second overall draft status.  Look, even if Turner had a career game, the Spurs still would have managed an easy victory.  But his tone and tempo were the worst we’ve seen yet.  And his negative energy surely wasn’t helping.

It’s now an open secret in league circles and the blogosphere that New Orleans Hornets are interested in Andre Iguodala.  Being a beat reporter for the 76ers, I’ve seen 95 percent of the season so far and I am starting to wonder why the Hornets are even interested.

Spurs color commentator Sean Elliot brought up an excellent point.  Iguodala looks burnt out.  Remember AI9 was actually a key component on the 2010 US World Basketball Team and reportedly worked harder the rest of the summer improving his outside shooting.  We’ve seen just one 20-point game in 10 contests from Iguodala.  We’ve seen just one double-double from our best player all season.  I know he’s a very well rounded player, but he isn’t even close to playing on an all-star type level.

There is no denying Iguodala’s talents as a great NBA player, but I just don’t think he is capable of carrying a team, especially a team with one of the worst frontcourts in the league.  His skill set is almost too broad; we are almost unsure what to expect from him night-in and night-out.  And this season it seems like Iguodala just isn’t the same player in transition.  He picks up his dribble at the worst times and almost refuses to charge hard to the basket in attempt to draw a foul on teh defender.

I’m not giving up on AI9 but I think the Sixers need to at least start putting feelers out throughout the NBA seeing what potential pieces we could obtain.  Let’s also not forget he is still fighting off a tendinitis injury and played in only 20 minutes Saturday.

All of my fellow Philadunkia bloggers remarked at how critical of a road stretch this would be for Doug Collins’ squad because four losses would increase the already deep hole the Sixers are going to have to climb out of to make a playoff run.  Additionally a slow start to 2010-11 would make the Sixers even more irrelevant (If that is possible.) on the Philly sports landscape.  Yet we did not see anyone on the Sixers roster step up and shine (besides Jodie Meeks against OKC) during this vital past week of the schedule.  We entered the season with pretty low expectations.  Now sitting at 2-8, maybe those expectations weren’t low enough.

• Philadelphia had just 12 points in the third quarter.

• Jrue Holiday was trying to be way too fancy several times, which resulted in six turnovers.  Doug Collins sighted one of his first half turnoversas the turning point in the game.  Still, he has been reliable over the last five games and led the Sixers with 16 points.

• Dajuan Blair had a double-double for the Spurs with 10 minutes remaining in the third quarter.  The last 76er big man to grab at least 10 boards was Elton Brand on October 30th.

• Marreese Speights played his best game all season with 11 points and seven boards.  Speights numbers were inflated due to the lopsided loss but he was actually in the game early on subbing for Spencer Hawes.  Years three and four in the NBA are often called the ‘make or break’ time in a players career.  Let’s reevaluate Hawes and Speights around Christmas time, but right now it isn’t looking pretty.