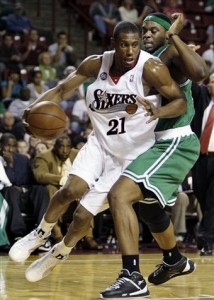 What is the key to the Sixers going anywhere in the playoffs this year? The current five-game loosing streak has made the answer very obvious — Thaddeus Young.

When Thaddeus Young went down with an ankle injury against the Hawks on March 31st, I couldn’t help but to think back to the 2004 NFL season for the Eagles when Terrell Owens went down with a season ending ankle injury against the Cowboys which held him out of the playoffs until the Super Bowl. Luckily, in the case of Young it’s not that serious. Young was diagnosed with an ankle sprain that would keep him out 2-3 weeks, but only 10 days after the injury Young has been doing some light jogging and shooting which is a great sign.

The Sixers without Young have been described as “offensively challenged” , according to Kate Fagan of the Philadelphia Inquirer. I would say that hat is an accurate term to describe the Sixers recent challenges in putting the ball in the cup. The Sixers are on a five game losing streak and the team has shot a measly 42% from the floor during that span. Andre Iguodala has posted games of 21, 26, 19 and 19 points, but it has not been enough for a team that has been out scored during the course of this five-game loosing streak 523-460. Now a portion of the blame belongs on the Sixers defense which has not exactly been air tight of late, but the majority of it should be placed at the feet of the Sixers offense, or the lack of it.

Over the last five games, Dalembert, Green and Evans have done little to help fill the hole left by Young’s departure from the lineup. Even Speights suddenly can not find the bottom of the net. It’s basically been Iggy and Lou Williams trying to carry this team for almost two weeks now. For the Sixers that is not a recipe for offensive success.

Ole’ defense and a struggling offense is not a good combination for a team that is only a little over a week away from the playoffs – maybe, hopefully.

Still, Young’s return should cure a lot of ills and possibly push the Sixers on a playoff run. Young shouldn’t go by his last name, because he plays beyond his years, like he has and old basketball soul or something. His great head for the game actually makes him one of the wisest players on the Sixers team. His nose for the game is seen on countless occasions. Whether it’s cutting back door, knowing the right positioning for a put back, or just simply moving without the ball and setting screens Young is the best on the team at all the little things. Having a player on the court that has a high basketball IQ like Young gives the Sixers a lot of second chance opportunities.

Consistency is another attribute to Young that you know you’re going to get in every contest. Young is always consistent is his numbers and play. When Iguodala was struggling to find his role on the team early in the season when Elton Brand was fighting for his shots, Young quietly played consistent basketball every game and showed that he had improved his game dramatically since his rookie year. If you watch the Sixers play on a nightly basis, than you’ve noticed that it’s a rare occasion when Young has an off night. In Young’s 73 games played this season, only six of them did he score less than 8 points. Most recently, with Young in the lineup, the Sixers compiled some impressive wins during the month of March. They beat the Lakers, Heat, Blazers, and Bulls to make their case that they could play against the top teams in the league

Lastly, Young knows how to run the Sixers offense, and opens up opportunities for other players to step up for the team as well. Opposing team’s will no longer be able to double Iguodala at will or trap Andre Miller as he brings the ball across half court, because unlike Evans, you can not leave Thad uncovered.

Just as the Eagles needed Terrell Owens to play if they had any hope of winning Super Bowl XXXIX in Jacksonville, Young has to be healthy and play if the Sixers are going to get back on track and have a chance in their first round series, regardless of who they play. We can only hope that in his return from injury that Thad produces a first round playoff performance as memorable as T.O.’s electric Super Bowl XXXIX outting.

However, hoepfully this time the Philly team will come out victorious.