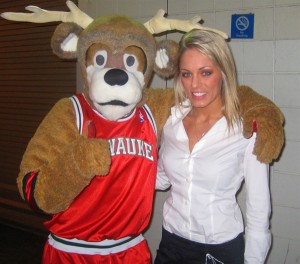 This Friday edition of “Fo’ with the Foes” — Philadunkia’s advanced scouting series which with the help of an accomplished journalist from around the NBA beat or blog world, previews upcoming 76ers opponents — features tonight’s opponent, the Milwaukee Bucks.

The Sixers will be without Andre Iguodala again tonight and that will make an already difficult game with the Bucks brutally tough.  To be honest, the Bucks will provide numerous issues for the 7-6.  Milwaukee is one of the best defensive teams in the League and is holding opponents to 92 ppg. (3rdbest in the NBA).  The 7-6 have struggled to score the ball through out this year and they’re coming off a season-worst 36.8% shooting in Wednesday night’s 94-86 L to Toronto.  So buckets could be a rarity for the Sixers.

At the other end of the floor, the Bucks perimeter players — Brandon Jennings, Corey Maggette and John Slamons – will give Philadunkia’s home team major trouble.  Jennings especially killed the Sixers last year with an average of 15.8 points per game.  He pumped in 31 points Tuesday night and is averaging 22 ppg. in his last four runs.  So basically Jennings is on fire right now.

Of course complimenting the Bucks perimeter game is big man Andrew Bogut and his sidekick Drew Gooden.  Bogut who has “struggled” this season is hitting for 12 & 10 a night and Gooden is good for 10 & 6.  We all know that the Sixers are horrible at defending bigs, so expect both of them to have monster nights.

Still despite all of the challenges listed above, we don’t think the Sixers will get run out of the gym tonight.  Why do we make this shocking statement?  Well look back at last year.  Even during that train wreck of a season, the Sixers managed to go 2-2 vs. the Bucks.  For some reason they give the Bucks, a team that on paper is significantly better on paper, a hard time.  The Sixers accomplished that task in 2009-10 with the clown Eddie Jordan masquerading as their head coach and with pathetic efforts out of Brand in the last two games of the series (5 points total on 2-of-14 shooting).  Collins is a significant upgrade from Jordan and Brand is playing near his LAC All-Star level and those items should be enough to keep this game from getting ugly.  So for tonight we’re predicting a respectable loss by the Sixers without an outside shot at an upset.

For a little more insight into the Bucks team the Sixers face tonight, we turn to our man Jeremy Schmidt @ bucksketball.com to answer two questions on this Milwaukee squad from us here at Philadunkia as well as provide us with two points of analysis on the Bucks from an insider’s perspective.

Philadunkia :  Despite a 2-2 series record in 2009-10, a 7 point average margin of victory in those games and the fact that Bucks are on the road tonight, we saw that you are predicting a blowout win for the Bucks. We’d like to hear a little more on your theory behind that prediction?

Jeremy Schmidt @ bucksketball.com :If the Bucks are serious about being a contender for the Central division title, they need to beat up on weaker teams. At this point, perhaps because they haven’t figured things out just yet or perhaps because they are without Andre Iguodala, the Sixers fit the bill of a weak team. Milwaukee rolled over Atlanta on the road last week and is the league’s second best defensive team.

Philadunkia :  Former Sixer John Salmons is a player we have always liked and were disappointed to see leave Philly. We see he is putting up some solid numbers for MIL, but what do you think of him as a player and how’s he really doing this season?

Jeremy Schmidt @ bucksketball.com : Salmons has been struggling a bit this year, though there is some question as to why. Is it typical rust as a result of a knee injury that left him unable to participate, or is this just “First Half John Salmons” doing his thing again. Three seasons in a row now he’s been struggled through the first half of a season, the last two he’s really gotten going, hopefully he’ll do it again at some point this year for Milwaukee. If he’s shooting under 40% in two months, that four-year contract extension he got this off-season starts to look pretty grim.

1) Andrew Bogut’s been struggling offensively this year, but he’s been among the league’s very finest defenders. I know you already aren’t expecting much out of your centers, but expect even less against Bogut.

2) There has been a theme running through Bucks victories: when they control the glass, they do pretty well. Milwaukee should be able to take advantage of their front court size against the Sixers to dominate the rebounding battle.