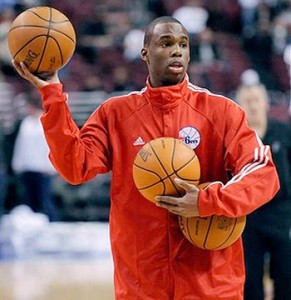 A broken clock is right twice a day.  Ed Stefanski is right every three years.

The sole occasion in Stefanski’s tenure as Sixers’ GM where his convoluted hardwood intuition has, through even sheer happenstance, coincided with objective reality came on Feb. 18 2010.  On that fateful afternoon, he traded Primo Brezec, Royal Ivey, and a second-round pick to the Milwaukee Bucks for Francisco Elson and Jodie Meeks.

The last ten months, this trade has vacillated somewhere between “good” and “very good” on the Sixers trade-o-meter, and lately has been swinging hard in the direction of the later.

Meeks has produced 1.1 wins with a 0.077 WP48 in a Sixers uniform, while Brezec produced -0.1 wins for the Bucks last season before being cut loose and Ivey has produced zero for the Bucks and Thunder.  As for the second-round pick, the Bucks used it to grab unfortunately-named New Mexico forward Darlington Hobson –who was injured in training camp, never stepped on the floor, and was just waived

They gave up nothing, and what they got was a sight better than something.  Meeks’ skill set make him an ideal complement to either Turner or Iguodala. A yin to their yang, as opposed to their own yang/yang chemistry.  He moves well without the ball, he’s aggressive, and he can shoot.  The space this rare and precious (for the Sixers at least) ability creates opens up avenues for the rest of the gang that simply aren’t there otherwise and the team, at Doug Collin’s prodding, has taken nearly-full advantage of this (see: huge first quarters). Thad Young (on account of the lanes) and Elton Brand and Spencer Hawes (on account of the increased inside space) have been the chief beneficiaries.

These trends have accelerated since Mr. Meeks received his promotion.

Yes, strange and wonderful things have happened since Collins threw his hands in the air, threw ET to the bench, and elevated Jodie to starter ( Should I have gone with “since Meeks inherited the earth?” Probably not) Dec. 3 against the Hawks. The 7-6 have gone on a 6-3 tear since (They are also 10-11 in games Jodie has played in this year against 1-5 when he hasn’t left the bench) and their three losses have come against last year’s two NBA finalists (the latter coming to the twice-defending champ) and two of the losses by all rights should have been wins (Atlanta and Boston).

The Sixers, despite sporting a 5-13 record when Meeks took over, had a more or less even scoring differential. Since Dec. 3 though, they’ve outscored opponents to the tune of 7.3 points a night.  Last season, such a mark would’ve ranked second in the NBA.

And Jodie’s numbers, while not spectacular (12.7 points and 2.1 rebounds on 43.5 three-point shooting in 30.7 minutes per since becoming a starter) are, again, especially welcome given that the things he does well are things that absolutely no one else on the team does even averagely.  This (as mentioned above) opens things up for our slashers, allowing them to slash with much improved efficiency, and our bangers, providing them much more space for their banging. And we don’t have to play Kapono.

Much ink is spilt over how this guy or that guy does things that make their teammates better, and it’s almost always nonsense. In this case though (and I cannot believe I’m typing this, let alone thinking it) Jodie Meeks’ mere presence makes his teammates better.  He’s a facilitator in the most exacting sense (albeit one who averages 0.8 assists per night).

Something unusual is happening with the city right now.  Since Saturday Dec. 4 — Meeks second start and the night of his six three-pointer first quarter — the Eagles have posted consecutive comeback wins against division opponents and fortified their position as legitimate contenders, the Flyers have won seven of eight to become the NHL frontrunner, the Phillies inexplicably signed Cliff Lee to become the heavy favorite to win the 2011 World Series, and, last but not least, our downtrodden Sixers have gone 6-2 and reinserted themselves in the playoff race.

And it all started last February when Ed Stefanski pulled the trigger on the deal that brought Jodie Meeks to Philadelphia.

RT @sixers: "He's always, all about winnin'. From the Philadelphia 76ers, y'all give it up for Ben Simmons." #NBAAllStar https://t.co/Sdi…
h J R
philadunkia

RT @PHLSixersNation: Tough love is still love. Embiid knows what can take Simmons, and the Sixers, to the next level. https://t.co/ItGc5as…
h J R
philadunkia