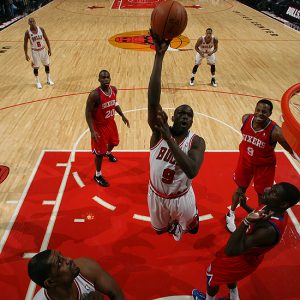 So much for the 76ers solid play of late (won eight of last 11).  The team lost the ugliest game of the season 121-76 in Chicago to the Bulls on Tuesday night.  It all began right from the tip-off for the 76ers (11-17), lacking energy and assertiveness on both sides of the ball.

The Sixers came out flat and looked lost on the court.

It was perhaps the most embarrassing moment since Eddie Jordan held reigns as the head coach as at one stanza the Sixers trailed the Bulls by as much as 50 points.

Entering the game, we came in ranked 2ndbest in defensive field goal percentage holding opponents to 43.3% shooting.  On the night, the Bulls had their will attacking the basket and knocking down open shots finishing with a 64.5 field goal percentage.  It was completely against what Doug Collins has preached all season long.  There was a lack of communication, no help defense whatsoever and the effort was atrocious to say the least.  Not to mention they struggled to get back on defense in transition, giving up easy lay-ups on the other end.  Derrick Rose attacked the basket at will, Carlos Boozer had his way against the likes of Elton Brand and Spencer Hawes, and Luol Deng looked like an all-star with 22 points.  Only one word describes the Sixers defense on the night – absent.

A major concern at the moment has to be if this team’s success on D was for real and truly improved, or just a product of recently playing softer opponents?  With the most treacherous road stretches of the season ahead – Boston, Denver, Golden State, Phoenix, Los Angeles and New Orleans – we’re going to learn if this defense can actually hold up against top-tier offenses.  However, giving up 121 points is not a positive sign for the young team.

For as pitiful as the defense was, the offense was equally awful.  It all began in the first half getting beat 61-43 while going 1-8 from the trifecta range.  The 7-6 were settling for jump shots, not feeding the post and refused to attack the paint.  The Bulls defense was suffocating and their quickness was something the Sixers were incapable of countering.  They struggled to get out in transition and killed themselves by not connecting on easy buckets.  Andre Igoudala and Thaddeus Young were the only players who scored in double figures.

Andre Igoudala was the sole player who found a rhythm on the night.  AI9 finished the game with a Sixers high 17 points on 8-12 from the field, most of his buckets coming from breaking down the opponent  1-on-1.  Thaddeus Young went 5-12 from the field and had 12 points.  The other players – including rookie Evan Turner who was 2-11 in 30 minutes played – struggled to put the ball in the hoop all night.

Elton Brand and Spencer Hawes in the frontcourt were probably the worst of all, especially considering the two best post defenders were out of the game for the Bulls — forward Taj Gibson and Joakim Noah.  Besides Brand’s 2-9 shooting performance, it seemed every time he faced up to the basket or made a move in that direction, Bulls forward Kurt Thomas was batting the ball out of his hands.  And Spencer Hawes was a no-show only attempting one field goal and missing.  Both of them got dominated in the paint on defense as well.

Doug Collins was so frustrated with this ball club and the game was so out of hand from the get-go that we saw one of his funkiest lineups.  On the court at the time was Battie, Speights, AI9, Evan Turner and Thaddeus Young.  A rather awkward lineup, that to my recollection, we haven’t seen all season.  But I guess desperate times call for desperate measures, and that’s what we were.  Desperate, down 79-50 in the third quarter at the time.

With the road schedule that lies ahead, this is a step in the wrong direction.  Did we jump on the bandwagon too soon proclaiming this defense was actually improved from last season?  Was it too early to think we legitimately had a shot at the eighth seed in the East?  Maybe the starting lineup that’s been a recent staple isn’t the best with Jodie Meeks running the 2?  Or maybe this was just an immature group getting caught off-guard against a better opponent?

We’ll find out what this team is really about and the answer to these questions with how they respond on the remaining road trip.

For now let’s just try and forget this one as quickly as possible because we need to focus on tonight’s game vs. the Celtics.

According the 76ers offical Twitter account which is hosted by Michael Preston of the Sixers PR department, there was a team meeting held at the Sixers hotel in Boston before practcie today.  Hopefully they got a few things straightened out and we will see a better effort tonight vs. the C’s.