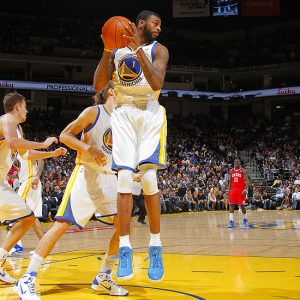 The grind that we call the NBA regular season can take its toll on the players.  It also takes a toll on the writers covering the sport.  Don’t get me wrong, I absolutely love covering the 76ers; but sometimes these recaps can become monotonous.  So today I am going to try something a little different.

The Philadelphia 76ers lost 110-95 Tuesday night in the Bay Area to the Warriors.  Golden State hit a season high 15 three pointers, and other than a bad stretch in the first quarter, the Warriors dictated the game.  The loss dropped the Sixers record to 12-19 on the season and 2-3 on this 8-game road trip.

After the jump, read the rest of what happened in my first 76er game night retro diary.

10:28 PM – Andre Iguodala is out with tendinitis and Lou Williams is also inactive. Somehow I still feel semi-confident the Sixers can hold their own even on the road. The things I’m watching out for in this game are: Is Monta Ellis ready to become a superstar? Can Elton Brand continue to be a rebounding machine? And a top-notch Jrue Holiday effort tonight will be essential for a victory.

10:41 PM – Warriors first-year head coach Keith Smart just compared Monta Ellis winning the Western Conference Player of the Week award to his wife telling him they were expecting a child. I guess they really are taking baby steps in San Fran (pun intended).

10:44 PM – The first two and a half minutes of basketball are reminiscent of a girl’s basketball game. The Sixers started 0-for-8 from the floor. Doug Collins already is burying his face into his hands. Golden State is nearly as bad. Keith Smart calls timeout after one minute and 30 seconds of basketball. If it stays this low scoring, I like the Sixers chances.

10:49 PM – The Warriors have already taken advantage of five Sixers turnovers, something rare for a Philly team who is fourth in the NBA in protecting the basketball. Louis Amundson slams home a cherry-picking dunk to put the Warriors up 13-4. This may get ugly.

10:51 PM – Warrior Color Commentator Jim Barnett “Philly could not play worse right now.” Monta Ellis is hustling back on defense and has already made some nice passes. Finally Thaddeus Young is checking in for the Sixers. Warriors up 16-4.

10:57 PM – And we have an Evan Turner sighting! In the first quarter too? Weird! Turner makes his presence felt by getting swatted by Amundson, twice. I want someone to put together a Turner non-highlight tape full of his mistakes. That video could be over 10 minutes long on YouTube.

11:03 PM – A series of Jrue Holiday drives (boy is he good with his left hand) and Thad Young spin moves has the Sixers rolling. It’s surprising to see Collins demanding the Sixers run this transition offense tonight without the usual depth. The Warriors have gone stone cold. Philly is on a 16-2 run.

11:03 PM – Turner is running the point and has the Sixers running on a 5-on-3. Yet somehow he misses a read to Elton Brand and the drive stalls. Philly shoots 46 percent from the floor in the first and Thad really helped turn things around in the first.

11:12 PM – Ever since that dreadful start the 76ers are on a 26-9 run. Still, we’ve turned the ball over six times already. Spencer Hawes may lack post moves but his impact in December has been a huge reason for the improved record. Just a minute into the second quarter, Hawes has eight points and six boards. The Warriors are missing Biedrens.

11:15 PM – The Warriors are starting to heat up from outside the arc. Dorrell Wright nails a deep three. I did not realize he could shoot this well, and his size has really spaced the floor for the Warriors. Jodie Meeks has forced a ton of jumpers tonight (and will eventually end up taking a whopping 15 shots on the night).

11:22 PM – David Lee and now Ekpe Udoh are doing a tremendous job on Elton Brand, whose 1-for-7 so far on the night. Brand has been a monster on the glass though. Philly is outrebounding the Warriors 25-15 but the Warriors have locked down defensively. There is six minutes left in the half and the Sixers have just five second quarter points. Philly has no star player to lean on during cold offensive slumps. Nearly every other NBA team does.

11:29 PM– The Warriors three point onslaught continues. They are 6-of-10 so far and now Steph Curry is beginning to heat up. Andres Nocioni makes a swooping finger roll and gets fouled; quite possibly the nicest play of his season. Sixers lead 43-38.

11:36 PM – Halftime. Somehow the Warriors are only up six after hitting a ridiculous 9 three pointers on 13 attempts. Turnovers (surprisingly) are hurting the Sixers but they aren’t out of this game yet. Jrue Holiday (12 points and eight assists so far) is showing in this game that you have to start mentioning his name alongside of Curry, Tyreke Evans and Brandon Jennings when you mention the point guard class of 2009.

11:42 PM – I am missing such an entertaining Monday Night Football game.

11:53 PM – Elton Brand is outplaying David Lee and already has 10 points and 12 rebounds. The 50-50 balls are going the Sixers way its just that Golden State is getting open three point looks on the reg.

11:59 PM – Jodie Meeks is showing some energy this half after literally dropping the ball in the first 24 minutes. Meeks has a hustle block on Curry and a huge three pointer, giving the Warriors a taste of their own medicine.

12:01 AM – It’s 59-59. I haven’t been overly impressed with Monta Ellis’ star power and neither are the refs,  who whistle the Warrior for a rare traveling call. I am rather impressed by his increased maturity. Ellis is looking to create for others, something I was shocked to see from the former ball-hog. Ellis now has seven assists in four straight games. This kid is turning the corner and will undoubtedly be an All-Star

12:11 AM – Some typical NBA back and forth occurs. Craig Brackins is in the game and Elton Brand does a nice job of cleaning up his mess for two easy put-backs. But Dorrell Wright is eating Thaddeus Young alive from outside and drills a second chance three pointer that became the momentum shifter in this game. A Doug Collins timeout wouldn’t slow down the Warriors who now lead 74-68.

12:16 AM – Thaddeus Young is a terrible dribbler. Sure he makes good plays but he often gets trapped with the ball. But hey, just like Monday night in Denver, the 76ers are hanging in there.

12:22 AM – The Sixers are controlling the paint and have 15 offensive boards to the Warriors seven. In the last 15 Philadelphia games, the Sixers have held their opponents under 100 points all but two times. If they can do that this quarter, they have a legit shot at taking down Ellis and company.

12:24 AM – Golden State has the best in game music. They are bumping Dr. Dre instrumentals that are making my head bob back and forth. I’ve always been a west coast guy. Evan Turner is the highest draft pick we’ve had since Keith Van Horn. Is it too early to say that Turner won’t even live up to Van Horn?

12:28 AM – David Lee is hot and has scored three baskets already in the quarter. Vladimir Radmonvic picked the perfect time to come up clutch. His deep three pointer with a man in his face hits nothing but net to put the Warriors in a comfortable position up 85-75 with 8 minutes remaining. Monta Ellis is on the bench and the lead is expanding.

12:39 AM – The Sixers just can’t get a stop tonight. You know why? No Iguodala. I normally rip Iguodala on this website but his strength and perimeter defense could have been huge tonight. Steph Curry nails a step back three to put the Warriors up 94-80 with five and a half minutes left. The Warriors only opponent now is the clock.

What do we take away from this loss?