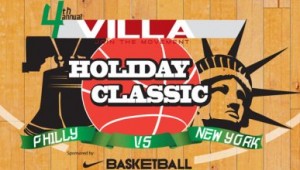 As we sit on the couch attempting to shake off the fog from our New Year’s Eve festivities while pondering yet another 76ers close loss, we thought we would take a minute to metion a fantastic high school event taking place in Philadunkia nation on Sunday.

Tomorrow (January 2nd) down at The Palestra, the 4th Annual VILLA Holiday Classic will present a slate of games featuring some of the elite high school ballers from Philadelphia and NYC.

After the jump we break down the ridiculous hoops matchups included in the 2011 VILLA Holiday Classic.