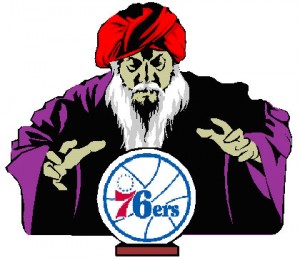 The Philadelphia 76ers are in it to win it!  I’m not talking about a lottery pick; I’m talking about that sexy 8th seed in the East.  Chicago has used the last playoff spot the last two seasons to grow their young team, and the year before that it was the Atlanta Hawks.

The last road trip ended in a respectable 3-5 record and majority of those games were without Andre Iguodala.  Jrue Holiday is gradually becoming the best player on this team.  His decision making and invasion of paint are helping create a winning mentality in the 76ers locker room.  The Sixers should be looking for some more consistency though throughout January.  Jodie Meeks has been unreliable and a two point guard lineup with Lou Williams may have to be considered

Rebuilding a franchise in the NBA can start the exact opposite of other sports.  Doug Collins theory is simple: You have to start somewhere.  Few teams work harder on both ends of the floor then the Sixers.  So what if the Sixers are swept in the opening round against the Celtics? The experience alone of overcoming the odds could change the entire climate of Philadelphia’s worst current sports franchise.

The next upcoming games are mostly at home and I’d say all but two of them could end with W’s.  Ideally the Sixers will make a solid push closer to a .500 record and bolster their playoff hopes before all-star break.

There is this theory floating around the NBA that it is more beneficial for an elite team to crush inferior opponents rather than win close games against other good teams. BasketballReference.com breaks down why the Heat have been gelling together and the Bulls have been doing the same exact thing.  Recent victories include a 45 point win over the 76ers, 31-pointer against Timberwolves, the Pacers by 19 and the Raptors by 17 and 18. The Bulls are 15-3 against teams under .500 Oh yeah, this hot streak has come without Joakim Noah, a top five center in the league.  Let’s add in that Derrick Rose may be the top MVP candidate right now in the East.

There isn’t anyone in the starting lineup who can consistently space himself and knock down a triple.  Derrick Rose is getting better at it, but if you are a team in the hunt for a championship, you don’t want your point guard hoisting unnecessary three’s.  Kyle Korver’s only averaging 20 minutes a game and has hit more than two three-pointers only four times in 2010-2011.

Sixers Strategy: The exact opposite of last December’s debacle.  Maybe play a zone defense and force the Bulls out of the paint, a place they have dominated in wins.

The Pistons are a veteran team who recently beat both the Hawks and Celtics. But the Pistons whiffed on the 2009 offseason in signing Charlie Villanueva and Ben Gordon, both who primarily have been coming off the bench.  Is Rodney Stuckey really a player you can build around?  Joe Dumars is slowly becoming the new Isaiah Thomas.

36-year-old Ben Wallace leads this team in far too many categories (rebounds, blocks and steals).  Where is the effort from this team? Rip Hamilton and Tayshuan Prince are like a bag of stale chips that desperately need a new setting.

Sixers Strategy:  Take an increased amount of shots. The ball just isn’t bouncing the Pistons way this season. Rebounds should come easy in The Palace.

Indiana is the glue between teams above .500 in the East and teams below the winning poverty line.  Roy Hibbert’s development (13.8 and 8 rebounds) is the reason Indiana is relevant again but his snag in play was a reason for the 5-10 December road record. Brandon Rush is also becoming an option off the bench.

The Pacers are shooting just 39 percent in their seven games, averaging barely 90 points.  The Pacers had been over .500 for much of the season but are 3-7 in the last 10 games.  After showing signs of scoring brilliancy in place of Chris Paul, Collison hasn’t reached 20 points in a game since November 9th.

Sixers Strategy:  Make this a 1-on-1 game between UCLA brethren Darren Collison and Jrue Holiday.  Holiday’s scoring is rivaling some of the best point guards in the East. This is as much of a must win situation in January as you can get. Iggy is cleared to begin basketball activities on the 10th, meaning Granger won’t be much of a factor.

Bogut is hidden in the shadow of Dwight Howard, but he is putting up numbers like a Defensive Player of the Year.  In his last 29 games opponents have reached 100 points only three times. Bogut’s 2.85 blocks per game is the centerpiece for how the Bucks have shut down powerhouse offenses.   December and January triumphs included two wins over Dallas, Orlando and a trouncing of the Lakers in LA.

Dead last in field goal percentage, scoring and have the worst offensive output rating since the 2004-2005 New Orleans Hornets.  You’d think this team would have built on last season’s momentum after pushing the Hawks to the brink in the playoffs. But the Bucks are on the outside looking in right now.  This offense runs too much through Brandon Jennings and without some drastic change they will not make the playoffs.

Sixers Strategy: The last game against the Bucks was a 90-79 win without Iguodala.  Thaddeus Young’s athletic ability in the paint crushed Milwaukee last time.  Slashing is the most effective way to beat this defense.

Props to Larry Brown for not setting back the Bobcats any further.  He just couldn’t get into this roster which seems almost unfixable and just couldn’t find the words to motivate Charlotte. Stephen Jackson is averaging 25 points per game in the last five contests.  Don’t rule out the possibility of Michael Jordan taking control of the clipboard next season.

Weaknesses:  No player on this team is safe, Scoring (28th)

The Bobcats should be exploring every trade possibility known to man.  These players aren’t gelling together and the loss of Raymond Felton is being felt harder than expected. There is just no bench play either from Charlotte. I’m shocked they have 12 wins.

Sixers Strategy:  The Bobcats do a horrible job of defending the perimeter. Jodie Meeks went off for 20 points in one quarter just a month ago against Charlotte. I think Nocioni and company will be connecting from downtown.

Reeling off seven wins in a row is something not many experts were expecting for this completely new team, or well old team.  Hedo Turkoglu is doing what he did during the 2008 run; a little bit of everything.  Gilbert Arenas has assumed the role of go-to three point shooter and Jason Richardson is an upgrade over Vince.

The Celtics runs through Rondo’s decisions, the Heat are learning to share and Chicago has Derrick Rose.  What’s the Magic’s late game strategy?  Orlando lives and dies by the three pointer, averaging nearly 25 attempts per game.  Can Dwight Howard ever become that dominant fourth quarter presence?

Sixers Strategy: To have any chance, Howard must be on the bench for extended periods of time.  Lou Williams should play a bunch in this game to get some of Orlando’s top players in foul trouble.

Chance of Winning – 50%. This would be a loss that starts a losing streak with two tough opponents from the West heading to Philly.  Doug Collins needs to reiterate focusing on one game at a time for this one.

The noise after the Utah’s back-to-back November wins in Orlando and Miami has calmed down.  All the recent talk in the West has been surrounding the Spurs and Mavericks success as well as the slumping Lakers. Paul Millsap has stayed hot at nearly 18 points per game.

Weaknesses:  No one can shoot

Outside of Deron Williams, the Jazz have to score inside the paint.  C.J. Miles, Raja Bell and even Andrei Kirilenko have been inconsistent in Jazz losses

Sixers Strategy: Take the ball out of Williams’ hands. Triple team him if you have too. This is not a good matchup for the Sixers offensively. Top-notch bench play will be necessary

The Suns have tons of guys who can get them 15 points on a given night but their roster has been dismantled since the Shaq trade in early 2009.  A team led by Nash will always be able to score with the best of them but the clouds are brimming on the Suns future.

The Suns seem like they are going into tanking mode and building for the future.  It’s hard to gage the amount of effort defensively this team is going to put in night-in and night-out. They’ve been plagued without having a lottery pick in a longtime.

Sixers Strategy: The Suns are long and tall and smaller guards (which the 76ers have an array of) give them fits.

Chance of Winning – 100% – I thank God every day I don’t have to cover this pathetic team.