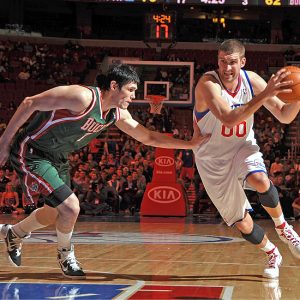 The 76ers playoff lives flashed before their eyes Friday night at the Wells Fargo Center against the Brandon Jennings-less Milwaukee Bucks.  But somehow, someway, the Sixers (16-23) were able to secure their first victory of the season in a game decided by less than three points.  Philadelphia was able to grip a one point lead and forced Milwaukee point guard Earl Boykins to take a deep corner three which rimmed out as time expired.

The 95-94 final score was an ending I wasn’t envisioning early on in the first half. At one point in the half the Sixers led by as much as 15, shooting a whopping 72 percent from the floor and had an extended two quarter 17-2 run.  It was one of those nights where the Sixers rode Lou Williams offensively.

The guard scored 25 points off the bench and connected on 9-of-11 free throws. Williams was slaying the undersized Earl Boykins and hit the go-ahead three pointer with 43 seconds to play. But his late game blunder almost cost the Sixers a win, or more notably a devastating collapse at home. A defeat would have been the Sixers third in a row and the streaking Charlotte Bobcats are the next team that will travel to the City of Brotherly Love.

With 15 seconds remaining and a one point lead Doug Collins and the Sixers decided to keep the ball in the hot hand of Lou Williams. And if you’re a regular viewer of 76er basketball I guarantee the next few sentences won’t surprise you. Instead of taking the ball to the bucket and hoping for a hard foul, an easy look or even someone like the hot-shooting Elton Brand to dump the ball off to, Williams decided to throw up his patented one-foot-draw-the-defender-to-jump-and-foul-me three point shot. Only this time the Milwaukee defender did not bite and Marreese Speights’ desperation heave at the basketball wound up in the hands of Milwaukee.

Someone please explain to me why this was the play call? Lou Williams should never be the closer for this team! I understand that Lou was having one of his best nights of the season at getting to the bucket, but those points were mostly in transition and not in a lock-down half-court defensive mode for the Bucks, who rank first in the NBA in scoring defense.

This play should have been drawn up for either of our best players. It could have been a much stronger Andre Iguodala taking a tired Corey Maggette to the bucket or Jrue Holiday, the must clutch scoring guard on this team. Uneven strategies like the one used tonight is a perfect example of why this team has struggled to finish out close games all year long.

There were positives though. Like a shooting percentage of 57 against a stingy defense. Or Elton Brand’s 15 points on mostly heavily contested jumpers. And the combination of Spencer Hawes and Marreese Speights did a conspicuous job of preventing Andrew Bogut from becoming a big factor in this game. Speights only received nine minutes of floor action tonight but that didn’t stop him from scoring seven points and running the floor aggressively against Bogut, a notoriously slow player.

The Sixers were able to overcome an 18-point fourth quarter offensive output because of the return of defensive captain Andre Iguodala. Whether he was matched on Maggette or John Salmons, AI9 put in a full effort in his 38 total minutes; the most he’s played since the December 26th win at Denver. The most memorable defensive play of the game happened right before Boykins deep three pointer missed as time expired. For some reason Bucks head coach Scott Skiles called up a play for Corey Maggette to attack Iguodala at the rim. What a mistake. Iggy stripped Maggette of the ball causing mass confusion which guaranteed a Sixer victory. Milwaukee hit 5-of-14 three pointers while the Sixers sailed through 7-of-14 from beyond the arc. It is safe to say Iggy’s presence was felt by the visiting Bucks.