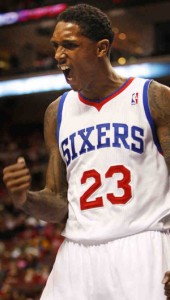 The last three 76er games have provided a pretty accurate measuring stick for the fans and for Doug Collins as well on the reality that a 2011 playoff berth is within the team’s reach :  The Sixers (17-23) are going to be right in this playoff hunt until the very end.

Lou Williams and company were able to avenge Tuesday night’s handling from the Pacers by winning back-to-back close games, an unheard of theme prior to this week.  The triumphant victory for now locks the Sixers into the 8th seed with a 1.5 game cushion.  Or possibly even better, it prevented a meltdown loss that could have divided a young team.

Monday afternoon it was the new-look Charlotte Bobcats who left the Wells Fargo Center with their heads sunken after a deflating overtime defeat.  The first half was what I call a snoozer.  I was almost tempted to flip over and check out some of the other NBA action on.  But who knew these two teams together could provide for so much late game entertainment.

The Bobcats had shot horribly from behind the arc all afternoon—7-for-30 total—and hadn’t put together much rhythm offensively besides Boris Diaw, who had a career day (25 points, 11 boards and 11 assists).  Diaw exposed Thaddeus Young inside and out, plus his shooting touch and defensive strength posed predicaments for the other our bigs.  The Sixers biggest run of the game came when Diaw was located on the bench in the third quarter, sparking a 10-0 run, and giving the team a comfortable lead.

The difference in Charlotte’s hustle and effort was detectable from their last trip here (December 4th) and it was a big reason the Bobcats were able to force overtime.  The Bobcats plucked 18 offensive rebounds, including five from KwameBrown who recorded season highs in both points (15) and rebounds (16).  Not one Sixer even seemed to attempt to box out Brown, who was owned the blocks thoughout much of the second half.  I’m not sure if the team thinks of the 10-year-veteran as a bust who doesn’t deservetheir full effort, but Brown showed he can still survive in this League.

It looked as if the Sixers were going to cruise to a victory leading by 11 with only 5 minutes and change remaining until Charlotte flipped on the switch and was able to score on six consecutive trips down the floor, capped by a deep Stephen Jackson three pointer putting the Bobcats up 81-79.

Michael Jordan’s franchise seized the momentum after that bucket and held it for nearly the rest of regulation.  The Sixerssquandered a huge opportunity with 45 seconds left down 84-83 when Evan Turner (6 points, 33 minutes, 1-for-7) immaturely decided to take his awkward pull-up jumper on a fast break rather than feed one of his many slashing teammates.  Luckily the Sixershad one final trick up their sleeve with seven seconds remaining.

Bobcat guard Matt Carroll had been subbed in by Paul Silas as a free throw specialist and canned bothhis free ones for an 86-83 lead.  With seven seconds left I was thinking either a Jodie Meeks triple or maybe even a screen-and-shoot for Jrue Holiday.  I wasn’t counting on Lou Williams bailing out the Sixers for the second straight game.  But he did.

Standing in the corner-baseline in front of the Bobcat bench, Williams caught Andre Iguodala’s chest pass, used his proven head fake to send D.J. Augustine soaring past him and clanked home the tying three-point shot.  Stephen Jackson got a great look on the other end (when Turner went under a screen instead of over) to counter the Sixers heroics but he front-ironed the deep attempt and on to overtime we went.

Overtime proved to be anticlimactic but that’s great news for a Sixers team who entered Monday 0-3 in overtime with two silly losses to Washington and a barnburner in Detroit.  Iguodala put the game in the Sixers hands for good when he caught Kwame Brown on a bad switch, hammering home a 19 footer. AI9 finished with 16, 10 boards and six assists in the frame and neutralized Gerald Wallace (11 points) all afternoon.

I can admit that the Sixers won this game because of Lou Williams’ effort, but he has to be one of the biggest ball hogs in the entire NBA.  Williams played 28 minutes and shot the ball 15 times.  He did put this team on his back in the third quarter, taking the Sixers from down 10 to up six.

Check out this stat: The Sixers are 4-3 this month.  In all four of those games Williams has scored 20 or more points.  In the losses he’s scored 14 or less points.  Doug Collins has to start to wonder if it is more effective in bringing a player with Lou’s scoring potential off the bench or throw him in the starting lineup, something I mentioned in my Next 10 preview .

The biggest story on defense in this game has to be Elton Brand who played a game high 46 minutes.  The 13 points and 13 boards are something we’ve all come to expect from Elton this season.  Plus his jump shot range has been tremendous all season.  But in the Monday matinee it was all about his new-found (or should I say re-discovered) shot blocking abilities.  Brand recorded five blocks.  Coming into the game he had just two blocks in his last nine games.  Some may say Brand was lucky on a few of the blocks because he was out of position, but I saw the exact opposite.  The soon-to-be 32 year old was making plays on defense that were impacting the game.

The Sixers overcame several obstacles and stilled prevailed Monday.  Holiday remained ineffective with Andre Iguodala in the lineup (3-of-14) and hardly played in overtime. Thad’s reign among the top field goal percentages in the league will certainly plummet after his 4-of-16 performance.  He missed two dunks and several other close opportunities, very uncharacteristic of him.  And the struggles continued for Spencer Hawes, ET and Jodie Meeks.  But in the end, the Sixers did what they haven’t been able to do many times this season, they won.

This team isn’t quitting.  No, no, this team is already starting to toss around that “P” word.

“It’s mid-January and we’re thinking playoffs,” said an inspired Elton Brand.  The 7-6 now has two game advantages on both Milwaukee and Charlotte, their main competition for that final seed in the East.

The rest of this fan base needs to quit their moaning.  This team might not be entertaining like the Flyers and Eagles.  This team lacks star power and flashiness of the Phillies.

But they aren’t going to fade just yet.