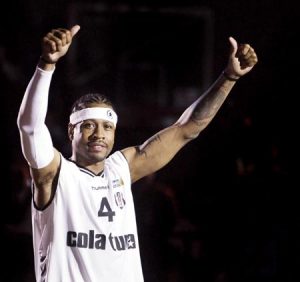 Back on January 12th it was widely reported that Allen Iverson was ready quit the Besiktas Black Eagles and ride off into retirement.

Reportedly “The Answer” was set to have a news conference that day to announce his retirement from basketball.  As we all know, that press conference never happened.

Later that day, Iverson’s personal manager Gary Moore told the Associated Press that Iverson “totally disputes” any report of his retirement.  Moore said Iverson needs to have a painful lesion removed from his right calf.  He said the injury was the most painful that Iverson has had in his career.

Now ESPN’s Rich Bucher has an update on this story which tells us Iverson has visited with uber-surgeon James Andrews and has now elected NOT to go under the knife.

According to Bucher’s report:

In his last game for the Black Eagles before returning to the United States, Iverson scored 17 points and dropped 8 dimes in 39 minutes of burn.  Despite Allen’s efforts, Besiktas lost again, 85-83 to visiting Efes Pilsen.  “The Answer” hit 5 of his 8 FGAs and also drained 4-5 from the charity stripe.

In seven games of Turkish Basketball League action Iverson has averaged 14.3 ppg. while shooting 44% from the field and nearly 43% from deep.