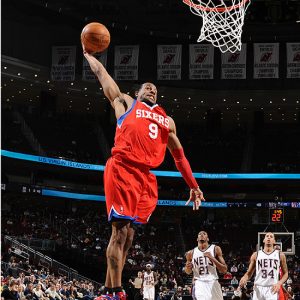 With a 69-48 lead midway through the third quarter, I felt pretty comfortable with the potential for a Sixer win.  However, after the Sixers gave up a 10-0 run in the ensuing minutes, I was certain we were in for the second coming of the Memphis performance.

Luckily, I was wrong.

The 76ers were able to fend off Atlantic division rival New Jersey Nets 106-92, resulting in their third straight win over the soon to be Brooklyn squad.  The loss gives New Jersey an 0-7 record against the Atlantic division and drops them to 15-35 on the season.  Coming into the ball game they’d been playing well at home winning five of their previous six.  Unfortunately for the Nets, the Sixers were able to outrun them for their second consecutive road victory.

The 7-6 are now 22-26 and sit in the seventh seed of the Eastern Conference.  It’s only the second time this season they’ve won consecutive road outings.  They are now 7-18 away from the Well-Fargo Center, but let’s not dwell on their road record and instead let’s concentrate on the great W over the Nets last night.

At the close out the first half and the start of the second, the Sixers really separated themselves from the home team.  Thanks to a 27-6 run between the two quarters, the Sixers held their largest gap of the ball game (21 points).  During that stretch, a livid Avery Johnson was ejected from the ball game.

First year Nets Head Coach Avery Johnson must have little man syndrome, because they way he flipped out on the refs was preposterous.  After a questionable no-call foul where Elton Brand reached in and knocked Devin Harris to the ground (FWIW: he did make contact with the ball initially), Johnson stormed up to the ref on-court and disputed his whistle swallowing.  After receiving one tech, he continued to blatantly follow the official closely behind while wildly screaming in his ear, it resulted in the second technical foul and an ejection.

Sam Mitchell — former Coach of the Year with the Toronto Raptors — took over the throne and the Nets produced some decent spurts, but nothing to bring them within single digits.  Mitchell used a zone defense to annoy the Sixers, but after struggling early on, it was solved with ease — thanks to Louis Williams — as we entered the fourth.

However, the game was won at two intricate parts of the game.  One being the fast break points.  The 76ers scored an incredible 48 points in transition, marking the most fast break points the Nets have given up all season.  Whether it was Andre Igoudala dunking at the rim, Jrue Holiday feeding the big men or Lou Williams finishing around the basket; we had no trouble getting out and running against the Nets.

Besides the transition game, the Sixers were flawless from the charity stripe.  18 free throw attempts, 18 free throws made —  including Lou Williams knocking down nine of those free throws.  Can’t complain with those stats.

The 76ers also added a new wrinkle to the offense.  The new facet to the offensive game plan was featuring Andre Igoudala as more of a point forward.  It’s omething the Los Angeles Lakers do often with Lamar Odom.  The thought process:  Let Igoudala get more touches and utilize his quickness against opposing forwards, and allow Jrue Holiday to be used more off the ball.

To my tally, the Sixers used AI9 in the point forward role approximately 15 times.  It seemed odd at first, but once the team was into it’s half-court set the degree of change was nothing drastic.  At times the offense ran well with Igoudala at the point.  A few plays he’d pass it to one of the bigs at the high post then run through a screen from the other big man on the opposite elbow, hoping to find space to create a shooting opportunity.  Or, he’d screen away trying to free up one of his teammates, which he did for Evan Turner who scored an easy two.  And at times it was a more boring approach as he simply passed it off and ran the basic Sixers offense.

With all that being said, it’s hard to judge how effective the new scheme will be with just one outing to sample.  And how much it will be used later down the road.  Since the Sixers got so many easy buckets in transition, their was no dire need to turn to their new fold.  However, the numbers for Igoudala and Jrue Holiday were quite stout.

Jrue Holiday did an excellent job leading fast break charges with fabulous assists.  Holiday finished the night with his first career triple-double, totaling  11 points, 10 rebounds and 11 assists.  He also finished the night with a +/– rating of +19.   A great benchmark for the young guard who is still learning to play the one.  At this time in his career we know he can excel in transition.  He got help from Igoudala who was on the other end of several assists.

Igoudala finished the night with 16 points on 8-15 shooting.  Andre seemed to relish the role of being a point forward.  He took a pair of bad shots, but overall seemed comfortable and fitting for the part.  He took some expected touches away from Holiday, but when Lou Williams was on the floor, Lou remained dominant in ball-handling duties.

Lou-Will, who I’m trying not to fall in love with, lead all scorers with 26 points including three knockdowns from beyond-the-arc.  When he is in rhythm, he can light up a stat sheet quickly.  Our success depends on his ability to take good shots, get to the FT line and hit crucial three-pointers.  Collins reliance on Willaims still scares me a little

With the Sixers awaiting back-to-back games against the New York Knicks.  They’ll have to discover a way to slow down Amar’e Stoudemire.  If the Nets’ Kris Humphries and Brook Lopez gave them trouble combining for 32 points on 15-28 shooting, just imagine what MVP candidate Amar’e will have in store for them.