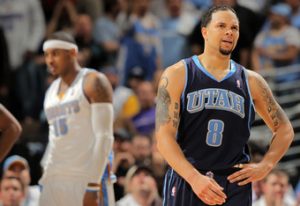 The real troubles in your life are apt to be things that never crossed your worried mind, the kind that blindside you at 4 p.m. on some idle Tuesday.

Within 36 hours earlier this week, the Sixers’ horizon — one that had started to look fairly bright of late — got a little cloudier.  Two storm fronts blew in.

The other blindsided us.

They both warrant a review through our red-and-blue glasses.

The forecasted front touched down on Monday night when the Knicks made a move that surprised absolutely nobody and freed Carmelo Anthony from the Nuggets.

Now, the thing about ‘Melo, as I’ve screamed before from the rooftops, is, for all his talents, he’s an average basketball player. He scores a lot of points, but requires so many shots to score these points that his value is marginal. He’s a fundamentally selfish player: a guy who draws enormous defensive attention, but rather than gift open teammates with the nice looks this attention potentiates, heaves contested 20-footers. And he doesn’t do much else. He’s an OK rebounder. An OK passer. He’s kind of turnover prone. The ostensible “superstar” has, since the beginning of last season, produced 8.7 wins –fourth on his own team in that span. He’s been a little worse than Aaron Afflalo and a little better than Ty Lawson. So am I OK with the Knicks committing 22-million-a-year (with a soon to shrink cap) to this guy? Yes. Yes I am.

Which isn’t to say the move isn’t a problem for Sixers fans with their greedy eyes on the six seed. While the Knicks didn’t get the superstar they think they’re getting, they didn’t give up a whole lot to get him either. Danilo Galinari, for all his potential, is yet to translate it into production (2.5 wins produced since ’09-10). Wilson Chandler is having a much better ’10-11 than ’09-10, but is still, at his best, just a serviceable 3. While Raymond Felton is a solid point guard (6.9 wins produced in ’09-10 and 5.6 thus far this season), and a great fit in D’Antoni’s system, he’s not a franchise player (unless your franchise is the Bejjing Ducks). The deals’ three other parts won’t be missed either: Timofey Mozgov is just bad at playing basketball, Anthony Randolph never plays basketball (If you’ve watched “He’s Just Not That Into You” at least once this year, you’ve spent more time watching “He’s Just Not That Into You” this year than Anthony Randolph has playing in NBA games), and the third part is Eddie Curry.

So the Knickerbockers gave up nothing of consequence, and they also (somehow) pried free from the Nuggets Chauncey Billups (still very productive, if a little pricey) and Renaldo Balkman, who had a pretty good first go-round in New York. Add it all up, and the numbers —as interpreted by Dave Berri— say the Knicks have gone from being a 42-win team to about a 50-win group with this move.

If things break their way, they could be even better than that.

Melo, for all his foibles (and he has a lot of foibles) definitely could become a great basketball player. While he seems to do a pretty lousy job properly using it, he has as much natural talent as anybody in the NBA north of South Beach. He’s like a kid who got a 1500 on his SAT, but goes to class too stoned to pass. Is he gonna make it? Probably not. Would I be surprised if he did? Not a bit.

And he’s shown flashes. When he’s played international ball — been surrounded by guys who would literally kill him if he put his own vanity ahead of the team — he was stupendous. Disciplined, selfless, but still assertive. It happens in the regular season too from time to time: a few weeks a year he’ll go on tears where he is simply dominant. If he can do that for an entire season, watch out.

Don’t hold your breath though. He’s been in the league for eight years and hasn’t done it yet. And the new Robin to his Batman isn’t much better. Amare, the “MVP candidate” has produced all of 3.7 wins this season. His FG% is 50 points lower than it was a year ago, he’s rebounding less, and is in the process of setting a career-high in turnovers. Oh, and he also had micro-fracture surgery and will be 33 when his 5-year-$100-million deal runs out.

So between them, the Knicks will be paying about $42 million per for at least the next three years for two average basketball players. This doesn’t leave a lot of money for above-average basketball players. Unless they find another Landry Fields in the Draft, the ceiling of the NBA team with the most financial resources at its disposal is locked-in at “pretty good.” As a Sixers fan, I’ll take it, even if it means we lose to Miami instead of Chicago in the first round of the playoffs this year.

As the NBA nation was still digesting the ‘Melo news, and Nets fans were licking their wounds, Billy King (Remember him? Me too. Sigh) and his Russian overlord pulled off one of the most clandestine trades in memory in prying Deron Williams from the Jazz while we were sleeping.

And unlike the Knicks, the superstar the Nets traded for is actually a superstar.

Regardless of the system used to evaluate him, D-Will grades out. You like conventional stats? The pride of Champagne is averaging a double-double the last four years and is scoring 21.3 ppg this season. Advanced stats your thing? He’s produced 9.1 wins this year with a PER of 22.17. Wins? The Jazz have averaged over 50 the last four seasons.

But while the Nets got value, they also gave up a lot of it. Derrick Favors has, at 19, quietly had a very promising rookie season. Devin Harris is, while a bit of a disappointment since coming to Jersey as the centerpiece of the Kidd trade, a good, young, point guard. And the two draft picks the Nets surrendered project to be in the Lottery. So they forfeited not only the young talent on the roster, but any possible infusion of cheap, top-shelf youth down the road.

The Nets know all this, but are banking on two things: Williams being great (a safe bet), and Williams’ greatness (and his resigning with the Nets) attracting free agents (the sketchy part).

While the Nets have room under the cap to add another top player this offseason, there really isn’t anybody out there. Look at this list of players. Zach Randolf. Tyson Chandler. Kendrick Perkins. Are any of these guys impact, franchise type players? Are they even worth what they’ll cost on the market?

Waiting another offseason might not help their cause either.Why? They’ll have missed the playoffs again, further dampening their desirability to FAs.

The Nets are at 17-40 right now and are projected by Hollinger to finish at 26-56. Even if we assume that over the course of a season Williams is about 10 wins better than Harris (probably a little generous) and that they don’t lose anything production wise now or in the future by replacing Favors with Brandon Wright (they acquired Wright in a separate deal for Troy Murphy’s expiring contract) we’re still looking at a lottery team, and franchise players don’t usually jettison the city that drafted them for teams that won 35 games.

Unless, that is, there are extenuating circumstances. And we just might have some extenuation.

The draw of playing with Deron Williams — a no-doubt franchise point guard in his prime — in Brooklyn, for a team co-owned by Jay-Z, might make the relatively deep-pocketed Nets the free-agent destination for the next few years. And if they really are, as rumor has it, tiring of the secretly awful Brook Lopez (5.8 rebounds per game?), they become even more dangerous.

The boost the Williams move gives the Nets makes me nervous, and the boost it could give them down the road makes me more nervous still, but what really concerns me is the fact that they pulled it off. The way they pulled it off. The Nets watched the second-straight guy they reallywanted go to another team, and rather than panic, they calmly and capably switched to plan B –getting the second-best player at the most important position on the floor for a teenager, a dissapointment, and a pair of draft picks.

I don’t know how this move is going to work out for the Nets.

I do know the Sixers have to get it together, and fast. New Jersey sure has.