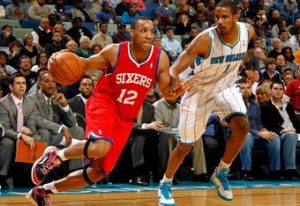 John Wall and DeMarcus Cousins may be putting up some nice statistics in their rookie seasons. Congrats to them.  Guess what though?  The Wizards and Kings are light years away from making any type of noise in the postseason.

76ers rookie Evan Turner is learning how to win in the NBA right now.  He’s contributing as a member of one of the most talented backcourts — and benches for that matter — in the entire League.  He’s grown to embrace his role off the bench.  Turner’s shown his own flashes of brilliance this season too.  The 20 point, 7 rebound game against Golden State early in March was a defining moment for the combo guard.  The 23 points in Phoenix without Iguodala didn’t go unnoticed either.

The best thing I took away from my time with Turner was his recognition of how mental the game of basketball becomes at the professional level.  Mistakes must be limited.  Improvements must be made.  And progress will come.

Turner can surely become a 20-5-5 guy with multiple all-star appearances.  He didn’t burst onto the scene in high school or college for that matter.  The few of you have already written Turner off are the same individuals who after the 3-13 start wanted the 7-6 to lose games and “tank” this season.

Well this season we have all learned that adjusting your attitude, like Evan has done this season, can make all the difference.

Catch the full Evan Turner interview after the jump. 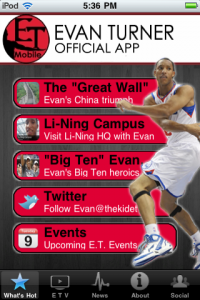 Philadunkia:  Before we start talking basketball, let’s discuss a nice move you just made off-the-court.  We understand you recently entered the world of mobile technology thanks to a smartphone app you developed with XCO Sportslink.  Tell us a little bit about your new app.

Turner:  It’s basically about me, called “ET Mobile”. It gives a sneak peak into the person that I am, off the basketball court.  It also provides my “Evan the Analyst” opinions of the NCAA Tournament match-ups and will later give my opinions of other aspects of the game of basketball.

Philadunkia:  What types of content can fans expect to see coming out on your XCO Sportslink app?

Turner:  It has background information about where I grew up (Chicago), about some of my experiences at Ohio State, and about my journey to where I am now in the NBA.  It has short videos of some of my personal experiences and trips—like my trip to China for a promotional tour with my shoe partner-Li Ning—and it has some of my favorite songs, places to eat, and even some of my favorite phrases with explanations of why I say things a certain way!

Philadunkia:  How much input did you have into the creation of the app?

Turner:  A great deal.  I worked on this project from the very beginning with my agent, my marketing manager, and XCO—the developers of my App.  It will continue to be a collaborative effort every step of the way, as we continue to update the content along the way.  I’m very involved and very excited.

Philadunkia:  Alright, let’s talk some hoops.  You had a quote for me this summer in Orlando.  You said, “You have to adapt to those around you, before they adapt to you.”  How do you think you’ve adapted this season?

Turner:   I think I’ve done a pretty good job.  I’ve done everything asked of me.  I’ve come in off the bench and added spark, using my all-around game.  I hit the boards hard.  I distribute the ball.  I score when I can.  I’ve been doing well with my minutes.

Philadunkia:  How is the point guard position different in the NBA than it was for you at Ohio State?

Turner:  At Ohio State, everything was centered around me.  Playing point guard in the NBA is about setting up the scorers on the team and spreading the ball around to the right places.

Philadunkia:  Was there a certain turning point – in the locker room, or at practice – when the team was 3-13 that light bulb went off and things got turned around for this team?

Turner:  After we were 3-13 we started looking at the games we lost, and we were losing a bunch of close games.  We just never got totally down on ourselves.  We kept saying ‘keep working’ and ‘were turning the corner’.  That’s exactly what we’ve done since.

Philadunkia:  How did the team react to the Carmelo Anthony trade?

Turner:  Hmmm, we know its there, we saw it happen.  They are a great team.  Carmelo is definitely an elite player.  But the most underrated part of that deal was getting Chauncey Billups.  With those two and Amare, you really have to prepare a game plan for stopping them [offensively].  But at the same time were just focusing in on our next opponent.

Philadunkia:  Do you guys check the standings? I want to know what Doug Collins philosophy is on that.

Turner:  We do look at the standings, take a peak where we’re at.  We’re just trying to climb up.  We’re not looking behind us.  We’re looking forward.  We have to finish these last 12 games (now 11) strong.  That’s the most important thing. 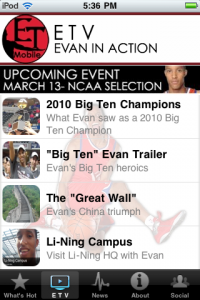 Philadunkia:  Doug Collins is a coach of the year candidate. How has he been able to turn this team around so quickly?

Turner:  He’s definitely our leader.  He preaches playing together.  He knows exactly what our players can do.  And clearly he’s been using that to our advantage.

Philadunkia:  What do you expect your role to be once the playoffs begin?

Philadunkia:  Which teammate has taken you under their wing the most?

Turner:  Dre really has, but Lou Williams definitely has.  He’s been through a lot in his career.  He’s taught me a few lessons that he’s learned growing up in the NBA.  He’s been a great guy.

Philadunkia:  Is there a specific lesson Lou has taught you that sticks out?

Turner:  At the end of the day this is ultimately a business.  Never take anything personal.  And always keep working.

Philadunkia:  What improvements are you going to focus on to become?

Turner:  One thing is to become a better shooter.  And another thing for me is the mental game.  When my mind is right, my game is right. I need that confidence in regards to shooting the basketball. Also practicing coming off screens and a few other little things.

Philadunkia:  How far can the 76ers go in the postseason?

Turner:  As far as we want!  As long as were doing the right things.  A lot of times you see the teams who win playoff games win the physical battle.  Making it to the second round or beyond is not out of the question, as long as we focus and are ready for a battle every night.