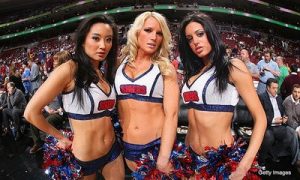 Dei Lynam at csnphilly.com is in Chicago for the NBA combine and has some quotes from the various bigs the Sixers are considering at #16.

You can watch the NBA Combine live on ESPN3 and ESPNU today.

Kate Fagan at philly.com tackles the question, “If the Sixers had it to do over agin, would they draft Evan Turner?”

Is anyone else ecstatic that the Sixers are NOT involved in the Kevin McHale sweepstakes?

If you want to see some great scenery, check out the Sixers Dancers auditions on June 21st.

Via Twitter we learn that Evan Turner (thekidet) was trying to work on his game over at PCOM, but couldn’t use the gym because of a dodge ball game.  Damn kids.