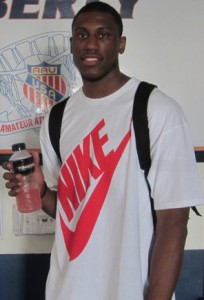 Thad talked to our man Jeff about what he’s been up to the summer, his basketball camp, Doug Collins, the Sixers 2011 Draft, the lockout and of course whether or not he thinks ‘Dre will be back in a 76ers uniform next season.

Philadunkia:  What have you been doing this summer to get ready for next year?

Thad:  I’ve just been working out.  Lifting, running, and just doing the normal things I usually do that are part of my everyday habits. I’ve just been hitting the gym and getting up shots and doing the things that the coaches have asked of me. Just trying to stay in sync and stay in the midst of things.

Philadunkia:  Last week you ran a summer basketball camp for kids at Competitive Edge Sports.  A lot of players in the League will usually just endorse a summer camp, maybe make one appearance and then they are on their wa,y but you were there everyday to help the kids learn.  What does that mean to you?

Philadunkia:  Do you find it fulfilling to see a kid looking up to you and smiling at what you have to say and things of that nature?

Thad:  Yeah it’s definitely fulfilling each and every day.  I like dealing with kids and I like helping kids and they’ve been great so far.  All the campers have been respectful and haven’t been talking back at all.  We’ve been trying to work with each kid individually.  How many kids can say they’ve been with an NBA basketball player for a whole week?  That’s the kind of experience I want to give them. 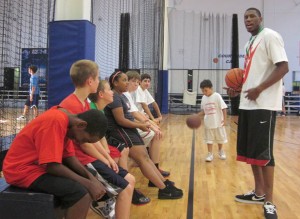 Philadunkia:  Obviously the contract talks are still going on and the NBA lockout is looming.  Are you ready to move past this and just focus on basketball again?

Thad:  Yeah.  I focus on basketball each and everyday but it’s definitely something that’s always at the back of your mind.  This is our livelihood we’re talking about.  What makes the world go round now is social media in sports.  Football’s locked out and now basketball’s locked out so what are you gonna do?  Me personally though I just love playing above all of the money talks and everything else.  I love just playing basketball and getting to the gym and having fun.  I just want to get past this and get my contract signed and potentially start up the next NBA season.

Philadunkia:  Have you guys kind of gotten together as a team and talked about what you would do if there was a lockout?

Thad:  We didn’t get together as a team.  Everybody has their different trainers and different workout guys so everybody’s kind of sticking to the same routine that they’ve been doing.  We all have talked but we haven’t talked about getting together or anything.  I’ve been in Houston, Atlanta, Memphis, and here working out and just getting a feel for everybody and I think the other guys are going to be in the same places.

Philadunkia:  How do you feel the draft went.  Have you talked to Nikola or Lavoy yet?

Thad:  No I haven’t talked to the rookies, but I feel like the draft has been great.  I think we got a good pick Nikola’s one of the tallest guys with one of the tallest wingpans, and he led the Pac 10 in rebounding two straight years as well.  He’s only improved each and every year at USC so it’s definitely a good pick, as well as Lavoy too.  It was definitely a good draft.

Thad:  Yeah definitely.  Each and every year I try to improve on every aspect of my game and with coach Collins the only thing you can do is improve because he’s always pushing you to get better and put you into a successful position each and every day.

Philadunkia:  How much do you think coach Collins has helped with your development?

Thad:  He’s been a huge part of my development.  It all falls back on me, but he’s put it in my head that I need to do this or I need to do that and I go out there and do it.  He’s definitely a guy that breaks down everything and puts it right in front of you and it’s up for you to learn from it. 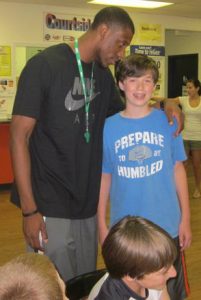 Philadunkia:  One thing people have been impressed with about you is the way in which you close games.  A lot of times last season even if the Sixers were down, you’d always be the high energy guy in the fourth to bring the team back and make the games close down the stretch.  Is this something you’re proud to be known as, a kind of go to guy in the fourth?

Thad:  Yeah definitely.  Me personally I love being a go to guy in the fourth.  I love being on the court at all times.  In the fourth that’s usually when guys take over games because they want to seal out the victories.  Me being a huge part of that is definitely meaningful for the confidence in my game.  I’m glad that people have started to realize that I’m going out there and giving it everything I have every single night.  Whether I’m having a bad game or a good game I’m always going to play hard on both ends of the court.

Philadunkia:  Where do you see the team going next year.  Do you think Andre is going to stick around?

Thad:  I’m not sure.  I know him and coach Collins met, I’m not sure what came out of the meeting but if he’s here then that’s great.  He’s definitely a great guy to have on defense, he can score the ball well, he’s just a walking triple double.  I love having him on the team.  He’s like a brother to me and we’ve been together the past 4 or 5 years so it’s been great.  If he want’s to leave though or if they decide to move him, it’s a business.  You just have to take it and go with it.  I wouldn’t be able to have any say in it anyway so, you can’t really worry too much about it.  That’s something they have to deal with in the front office.  Me personally, I just want to move on and get back into the gym, get back with my teammates, and just play basketball again.  If Dre is here great, if he’s not then we’ll just have to find somebody to fill that spot.

Philadunkia:  Would you be excited to possibly start at small forward in his place if he was moved?

Thad:  Very excited.  I’ve always wanted to play at my true position.  The team’s always needed me to play the four, but it really doesn’t matter to me.  If they still needed me to continue to play the four that’s fine with me.  It’s all about winning basketball games and potentially winning championships.

Philadunkia:  What do you think the owners need to do at this point just to get the season going next year and get everything in order?

Thad:  I can’t really speak on the whole lockout situation.  That’s between us and the owners.  We just need to come to an agreement where we can get into the season.  Hopefully we can do that soon.