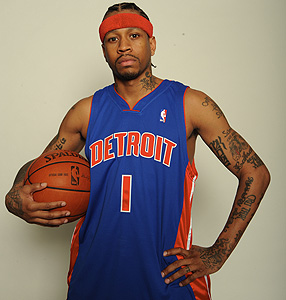 Since he is out for the rest of the season with a “back injury” and not playing in games or going to practices (insert joke here) for the Detroit Pistons, Allen Iverson has a ton of time on his hands.

What better way for Allen and “Cru Thick” to kill a few hours on a daily basis then to hit the casinos in downtown Detroit. Given Iverson and his “Cru’s” ability to show self restraint and not cause a scene, what could possibly go wrong?

Well according to an article in the Detroit News, Iverson was recently banned from both the MGM and Greektown casinos in Detroit.

Here a quick summary of the Detroit News report

“The NBA is looking into a disturbance at Greektown that involved one of Iverson’s body guards. Iverson may have been trying to act as a peacemaker but his body guard was involved in some kind of tussle.

Iverson, though, has been banned mostly for his boorish behavior. He is a bad loser, and he loses a lot, often throwing his chips or cards at the dealer. He has been warned about improper behavior at the tables repeatedly. He is often loud and disruptive, according to witnesses, rude to dealers, other players and the wait staff.”

It’s good to see Allen is still keeping it real and that he hasn’t changed since the days when he was playing for the Sixers and used to pull the same stunts in Atlantic City .

Still, we don’t care if he burned a casino to the ground, we’d still bring him off the 76ers bench next year in a heart beat.