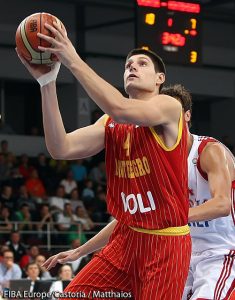 Nikola Vucevic already has one distinct advantage over nearly every member of the NBA’s 2011 rookie class.  The native of Montenegro has a leg up on his draft class peers because Nikola has already played professional basketball this summer.

Vucevic represented his home country in the 2011 European Championships (Eurobasket 2011) and in a time where the NBA is full of uncertainty – especially regarding which rookies might have any impact with this much time away from their NBA teams – Vucevic’s Euro-action late this summer could make him a pleasant surprise for the Sixers if and when the 2011-12 season tips off.  A strong rookie campaign from ‘Big Nik’ would be the answer to the team’s Achilles’ heel at center and potentially could propel the 7-6 to the next level.

Recently Nikola took some time to answer a few questions from us here at Philadunkia via email.  Among the things we discussed with the former USC big man were: his last meeting with Doug Collins, what elements of his game he worked on this summer, why he signed on to play in Montenegro and his thoughts on adjusting to the NBA style of play.

Interview after the jump…

Philadunkia:  Before the lockout went into effect, what did Doug Collins talk about the last time the two of you spoke?

Nikola:  Last time we spoke prior to the lockout, we talked about how he wants me to keep working hard and getting better. He gave me specifics on some of the skills he’s like to see me improve on, and I told him some of my plans that I had in mind that I could do while the lockout is in effect.

Philadunkia:  Have any of the 76er players been in contact with you since the Draft?

Nikola:  I came back home and have been overseas since the lockout, so I havent talked to any of my (76ers) teammates.

Philadunkia:  Some Philadelphia players met this past week in Los Angeles to workout together.  Did you consider coming to the workouts in LA?

Nikola:  I would have really liked to have been there, but since I am with my national team for the past two months, I was not able to go to that workout in LA.

Philadunkia:  What elements of you game have you been working on most during the off-season?

Nikola:  I have been working a lot on my jump shot. It is something that I think can really help me in the NBA. My goal is just to improve on everything and be a versatile player.  I’ve also been doing a lot of strength and conditioning work to get stronger and get in good shape to be ready whenever the NBA season starts.

Philadunkia:  Where have you been working out?  With who?

Nikola:  I have been working out with my National team for the past two months.  Now we are at the European Championship, where a lot of NBA players are playing.  Dirk Nowitzki, Pau and Marc Gasol, Tony Parker, Nicolas Batum, Joakim Noah, Danillo Gallinari and many more so it is a very good tournament.  On my team, I have Nikola Pekovic from the Timberwolves and other players that are playing in Europe. It has been helping me a lot to practice and play with them because they are all good professional players in Europe.

Philadunkia:  How much playing time do you expect to get for the Sixers when the lockout ends?

Nikola:  I don’t really think about playing time, I just want to come ready whenever training camp starts. My focus is to work hard, show what I can do to help the team win.

Philadunkia:  Once the lockout ends, do you think you can earn a starting spot on the Sixers as a rookie?

Nikola:  Like I said in the previous answer, I don’t really think about that minutes or starter vs coming off the bench. I would like to earn a starting spot but my main focus is to come to training camp ready and work hard and then we will see what happens.

Philadunkia:  What have you been told is the biggest difference between NBA basketball as opposed to playing in the Pac-10?

Nikola:  My coach at USC, Kevin O’Neill was in the NBA and he knows a lot about the difference between college basketball and the NBA.  The main thing he always said that the NBA is a much faster game than in college and it’s more physical.  And that I have to be ready every night mentally and physically because its such a long season.

Philadunkia:  What went into your decision to sign with a professional team in Montenegro?

Nikola:  The main reason why I signed with a team while the lockout is on is because I wanted to keep playing and getting better. As a young player, I need to practice and play games so that I can get better. I can only improve to a certain point if I workout on my own, when you have competition you can improve more. The team that I signed with is a young team and they play in a very good league in Europe and I will definitely benefit from that. Also, I will be close to my family.

Philadunkia:  Why do you believe that is the best move for you right now?

Nikola:  I think that it is the best move for me now because it will help me stay in shape and it will help me improve my game.  I will play against a lot of good players in Europe and I will have a chance to learn a lot from that experience.

Philadunkia:  Tell us a little about your new team KK Buducnost Podgorica, their fans and the league you will be playing in.

Nikola:  KK Buducnost Podgorica is the best team in Montenegro.  They have a lot of young players on the team and they do a great job of working with young players and they give them a chance to play, which was very important to me.  They play in the Adriatic league, which will be one of the best leagues in Europe this year.  A lot of good big men are playing in that league and it will help me get better to play against them.  And the fans here are great, they really love the team and are very supportive.

Philadunkia:  Are you excited / nervous to play professionally in front of your family and friends at home?

Nikola:  I am very excited to have a chance to play in front of my family and my friends. It has been a while since they had a chance to watch me play live, so I am happy that I will have a chance to show them how I improved since the last time they saw me play in person.

Philadunkia:  We read online that Buducnost’s arena only seats 4,500 fans. That’s a lot smaller then the crowds you played in front of for USC.  Will that require any adjustment in your part?

Nikola:  I have played in arenas that are all different sizes, and many times it doesn’t matter on the number of seats, its the crowd and how loud they are that can really make a difference.  We have great fan support, so no matter what size the gym is, I know I’m playing in front of really passionate fans.

Philadunkia:  You’re playing for Montenegro’s national team at the European Championships this month.  Do you think that someday you can help guide the team to an appearance in the Olympics?

Nikola:  We are playing at the European Championship now, we won one game and we lost one game and have three games left in our group.  We need to win two more to make it to the next round.  (Editor’s Note: Nikola and Montenegro went on to lose those three game and were disappointingly eliminated from Eurobasket 2011).  That is one of my goals as a basketball player to play in the Olympics, so I will do everything that I can to help my national team reach the Olympics.

Philadunkia:  Who is the one player you are most looking forward to facing in the NBA?

Nikola:  The player that I am looking forward to playing against the most in the NBA would be Dirk Nowitzki.  He is one of the best players in the NBA and is a future Hall-of-Famer.  Also, he is very tough to defend because he has so many different weapons, so it will be a great challenge to see

Editor’s note:  A great deal of thanks to Kristina Andersen at BDA Sports whose assistance made this interview possible