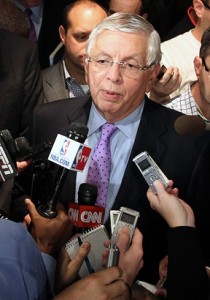 While the city of Philadelphia is darkened by the recent collapses of championship hopeful franchises, what’s even more depressing for hoop heads in this town is the idea that the Sixers have missed out on a huge opportunity to capture this city’s attention.

The Vince Young proclaimed “Dream Team” stands 1-4 in pigskin matches with coaches and players walking on a tight rope.  And the “Greatest Pitching Staff Ever Assembled,” lost in the postseason because of a poor supporting offensive cast — again.  Prior to the start of the MLB and NFL seasons, both the Phillies and the Eagles were allegedly bound for postseason success, but have since left their fans in a state of depression.

So what team does the city need during this troubling condition?  Yup, you thought correctly, it needs the 76ers.

So where are the Sixers, when the city needs something to turn to?  Locked out; on their couches at home; potentially looking for jobs overseas.

And you know what sucks, with the collapse of the Birds and Phils and a cupcake opening schedule for the Sixers, the 7-6 could’ve really grabbed the attention of the Philadelphia fan base.  At the end of last season, when the Philadelphia 76ers unexpectedly cruised to a .500 season after a 3-13 start, the team really started to gain momentum in a city whose attention was preoccupied with dreams of a World Series title.

With the improved record in 2010-11 as well as Evan Turner and Jrue Holiday showing so much promise, the Sixers could’ve taken the city by storm with a solid start to the 2011-12 season.  Now that the first two weeks of the season have been canceled — and likely more time to come — the Sixers have missed out on a huge opportunity for fans to “#ShowYaLuv.”   How good of a start could the Sixers have had?  Just take a look at the game-by-game schedule and quick breakdown for “The Games That Could’ve Been.”

Game 1: @ Toronto Raptors  The Raptors won 22 games last season, play little defense and lead the league in “No-Name Players.”  We would’ve won this game by 10, I don’t care that it’s in Toronto.   Percent chance we had to win: 95%

Game 2: Minnesota Timberwolves  Sorry, but I refuse to believe Ricky Rubio, who averaged under seven points and five assists in Europe last year, will be an immediate franchise player in the Association.    Percent chance we had to win: 95%

Game 3: @ Orlando   This is a tough game to predict.  We lost three of four to Orlando last season but played them really tough.  However, with Dwight Howard’s upcoming summer of free agency, this could be a distracted team.    Percent chance we had to win: 35%

Game 4: Houston Rockets & Game 5: Milwaukee Bucks   These two games get paired together: Two decent teams that are both beatable at home.    Percent chance we had to win: 45% chance we win both; 35% we split the two; 20% chance we lose both.

Game 6: @ Los Angeles Clippers   We beat the up-and-coming Clippers both times last season, since it’s away this is a toss-up.  I will give us a slight edge though, we match up well.  Few teams have the athleticism to keep up with the Clippers — we do.    Percent chance we had to win: 50%

Game 7: @ Portland Trail Blazers  We have no answer for LeMarcus Aldridge, plus they’re extremely tough on the road.    Percent chance we had to win: 30%   **The seven games listed above are definitely canceled.  The bottom three will likely not be played as well, but have not been officially canceled**

Reflecting on the schedule, the Sixers could’vebegan the season by winning seven of the first nine games.  Outside of Orlando and Portland — competitive games — the Sixers would’ve likely had favorable results.  Picture this: After those nine games and seven wins, Sixers fans are intrigued and anxiously await a showdown against the hated Heat in Miami.  Just for the sake of argument, say they go in and shock the Miami Heat; the city of Philadelphia would be all in for the Sixers.  Even if they don’t win against the Heat, an excitingly close game could be enough for the broken Phillies and Eagles fans to buy in.  I just got excited. . .

Oh, but wait, this is all hypothetical.  Unfortunately for us NBA fans, the lack of urgency between the owners and players association this summer has caused a standstill to our beloved season.  It’s a shame too, not only for the Sixers who came off a strong year, but for the entire League.  When was the last time an NBA season was so captivating from day one to the moment a champ was crowned?  When was the last time the Sixers were relevant?  Was NBA play ever as exhilarating as last season?  Probably not.  The NBA was a constant soap opera a distant season ago and instead of capitalizing on the phenomenal year (for our Sixers and the NBA in general), we have games being canceled.

Brace yourself though, because it’s likely that Philadelphia fans as well as fans of the entire League will be missing out on more potentially exciting hoops.