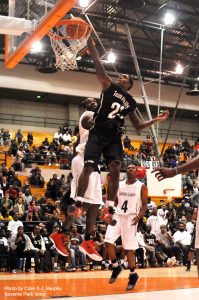 He was supposed to topple team Philly in front of his hometown.  Basketball addicts in the Washington, D.C. area had cleared their calendar a month in advance to watch a ‘Durantula’ clinic after such a bitter ending to his playoff quest against the Dallas Mavericks.

And then Lou Williams happened.

Sweet Lou finished with 53 points – 34 in the second half – to upstage Durant, John Wall, the bevy of attractive female groupies and the few NFL players sitting courtside.  No one at Calvin Coolidge High School could take their eyes off of Lou.  He was giving grown men the chills.  Honestly, I don’t ever recall seeing a player catch fire like Louis did Saturday night.

“The past victories it was a team effort, but third quarter I caught heat, fourth quarter I really caught heat,” grinned Williams. “You are subject for that to happen in an exhibition game.” Team Philly escaped a much superior (on paper) Team DC 172-167. There will be more Williams quotes in an exclusive one-on-one he gave me later this week.

Durant and Wall were answering to the scoring barrage of Williams and not vice-versa. The image most fans probably will leave with were the back-to-back baseline three pointers late in the fourth (he hit 7-of-18 three’s) that were critical in keeping Team Philly afloat. But there were also an array of slams, tip-in dunks and acrobatic reverse layups that I can’t help but keep replaying in my mind.

I caught up with NBA insider and one of my favorite people in the world David Aldridge who stated “It was absolutely insane what Williams did. That’s one of eight billion reasons of why I wish we could get the lockout resolved. I’ve seen Lou do that in fourth quarters of games before. When that happens absolutely no one can guard him, he’s unstoppable.”

It wasn’t just the third and fourth quarters where Williams showed those who didn’t know in the nation’s capital that he’s a dynamic player. Team Philly led the game and remained in control all the way until the late third quarter. The underdogs had leads of 36-22 in the first and 55-31 at a point in the second. The duo of Lou Williams and Kyle Lowrywas dreamy; both scrapping for fastbreak steals on Durant, both launching and sinking deep three pointersand both taking the game as seriously as a playoff contest.

“Lou is such a competitive player, it’s just so exciting to play with him,” said Kyle Lowrywho finished with 44 points of his own off of 7-of-11 shooting and a Villanova-esque12 rebounds. “Everyone in the league knows how much his game has grown with his ability to make shots from anywhere.”

Team Philly just wanted this game more. You look at the 174-169 score and obviously assume that much defense wasn’t played, a true assumption. But there was effort lacking from Team DC and some bitterness on their end too. Most DC playersrefused to speak with the media after the game, including Durant, a rarity from one of the NBA’s most humble celebrities.

Rather than giving you a play-by-play analysis of a glorified exhibition games, I thought I would hand out some awards instead.

Christmas, a Temple University legend, was the main reason for Team Philly’s hot start showing that his three point shooting hasn’t taken a hit since playing in Greece. What I noticed about Christmas was his defensive intensity. Remember this is a guy who got an invite to the Sixers preseason roster back in 2009. And while I don’t think he quite fits into Doug Collins’ rotation, there could be plenty of room for him on another NBA roster, especially if some borderline players come in out of shape.

“I knew we were short today without Tyreke Evans and Wayne Ellington, I knew I needed to givea spark off the bench,” said Christmas, who also gavehimself a ‘B’ performance. “I will never givethat NBA dream up. I thank the 76ers for the taste they gave me. Hopefully when the lockout is resolved, I can swoop back in.”

Yes, the numbers look amazing and he did show glimpses Derrick Rose a third quarter mano-y-mano against Lou Williams. But I was left unsatisfied for some reason. Maybe it was the wide open three pointer he bricked with one minute left that could’ve given Team DC the lead. Maybe it was his sluggish defense. Or maybe it’s the fact that the way he plays is going to mean a career full of injuries. When Wall hits the deck, he hits it hard, and too often. Sometimes he reminds me of Luis Mendoza from the Mighty Ducks movies; he’s too fast for his own good.

An obnoxious fan actually put it perfectly when he said this looks like the Syracuse Hakim Warrick. He was straight up dominating DeMarcus Cousins, Jeff Green and made it difficult for Durant to do much around the basket. Warrick provided the most highlights too with several ferocious dunks. I’d say outside of Lou Williams he was taking it the most seriously

“This is serious man! This is what we doing in Philly. I don’t know what [Team DC] thought, but we come out hard every time,” said Warrick. “We don’t have the big names but when I put this team together I knew we were gonna’ fight.”

Cousins can rebound the basketball at a high level but it just seems to me that he doesn’t love basketball. He looked like he was going to cry all night. I know it’s an exhibition game, but why wouldn’t you try your hardest? It’s a good way to gauge what you need to work on. David Aldridge and I were talking about players‘getting it’ and coming into their own on and off the court. With a simple attitude adjustment I think Cousins could be unstoppable. Until then, he will continue to be his own worst enemy.

The rather hilarious MC/play-by-play announcer referred to Tynsdale as “the guy nobody knows.” For some reason though, Team Philly couldn’t take Tynsdale off the court during a close fourth quarter game. Tynsdale was doing an effective job on Durant, who by my count only had six fourth quarter points. The former Temple Owl and D-League stalwart may get some NBA looks soon.

Best Highlights: A Kevin Durant dunk that looked like the Jordan symbol. I tweeted that I peed in my pants just a little. There was a Jarrett Jack to Jeff Green alley-oop. But the craziest play was a Team Philly 2-on-1. I can’t recall the first Philly player (leaning towards Kyle Lowry) but his floater attempt near the the hoop was emphatically rejected by Wall off the backboard. But Hakim Warrick came swooping in to jam home the ball off the backboard. It looked like a circus act.

“There are no words to explain that. He was unconscious today. He was the MVP and the reason why we won today.” Dionte Christmas

“He was killing it. He was shooting lights out. It felt like he had 70 points. When a guy is that hot, you gotta’ keep feeding the beast.” Jason Thompson

David Aldridge with some words on the lockout

“It’s tough this year because they are so much closer than they were in 1998. In ’98 you just knew there was going to be a long lockout, there may or may not be a season and you kind of just knew that. They went weeks without talking then. That’s why this is so frustrating because they are talking all the time. Somebody added it up it’s been like 31 hours they’ve talked over the last three weeks. That’s why it’s frustrating because it seems like there is a deal there, just somebody has to reach.”

Special thanks to Colin Murphy for allowing us to use his photo from the event.  You can read his coverage of the game by using this link http://www.severnaparkvoice.com/the-voice-sports-blog/1515-team-philly-stays-hot-tops-team-dc-at-coolidge-high