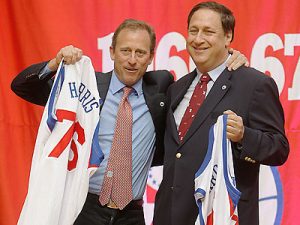 Since the “76ers for sale” rumors started flying around the internet this past spring, there’s been only one person  we’ve been waiting to hear from — billionaire Joshua Harris.

For months we have heard nothing from Harris in the media and our repeated requests for interview time went unanswered.

Well, yesterday was the big day, as Harris and new 76ers CEO Adam Aron finally stepped into the Philadelphia spotlight.  As the press conference was about to begin I literally had goosebumps.  The 76ers were about to launch a new era in which they will be owned by a billionaire and some of his pals who will be laser focused on the 76ers.  Philadunkia nation was about to get it’s own Mark Cuban or Mikhail Prokhorov.  I was smiling ear to ear as the Sixers would no longer be Ed Snider’s second favorite son.

Then the press conference began and my smile was soon wiped away.

Yes Harris and Aron said all the right things — as most very successful businessmen have been trained to do in a public speaking setting.  And there was some positive news — Ed Stefanski is out.  But let’s be honest — there was no pop, no sizzle, and  overall a lack of any energy behind the whole event.  By the end of the 44+ minute press conference, some of the excitement I had for a new beginning for the 76ers was drained from my soul.

Obviously this new ownership group is comprised of very smart businessmen who by all accounts will do great things for this organization.  Believe me, here at Philadunkia we are praying very hard that Harris & CO. can make the 7-6 relevant to the Philly sports fan again.  However, in my opinion, the new era sure did get off to a slow start yesterday.

After the jump, are a few of my notes and key quotes from down at The Palestra on Tuesday…

Q: Are there plans to replace Ed or is Rod going to assume greater responsibility?

Harris:  We were lucky enough when we bought the team to have two fantastic people doing one job in Ed and Rod. So it was two people, both very well qualified, doing one job and we’re going to stay with Rod.  There are no current plans to replace Ed.

Q:  Will there be any of the owners that have any say, and I’ll use the word interfere with Rod in a kind of personnel decisions?

Harris:  You can be assured that we are interested owners and that we are going to be very focused behind the scenes there’s going to be lots of debate about what we do with players and so forth but at the end of the day, Rod is the captain of that ship and so he’s going to run that part of our organization.

Q: Why would you buy a franchise that has lost money for at least the last seven years?

Harris:  I look at it quite differently. I think that we are lucky enough to buy the third most winning franchise in basketball history.  A storied franchise, at a time where we think we were able to get what we think is an appropriate deal for the team and we think we’ll be able to breathe new life into the team.  The team as you are aware had been less connected with its fans and wasn’t really generating revenues and selling as many tickets as we think we ultimately can do.  We think there’s lots of things we can do to improve the financial situation of the team…

Q:  How is the deal to acquire the 76ers similar to business deals in the past in which you have acquired distressed companies and then turned them around?

Harris:  I wouldn’t call the Sixers distressed…This is a situation where we feel taking the Sixers and making it a stand alone business — 100 percent of our time focused on that asset, not a broader package of assets — when we’ve done that in the past, we find that the singular focus breathes new life into a lot of situations.”

Q:  Have you reached out to Pat Croce to find out if he was interested in getting involved or to learn about some of his success in the past?

Harris:  There are a lot of people who have done a lot of great things for the Sixers overthe years and you can rest assured that we will be reaching out to all of them.  Most importantly the fans.  We want the input from everyone and certainly he’s a well known figure in Philly and we have and will continue to reach out to him and others.