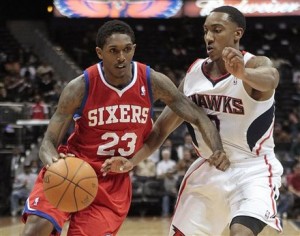 Good news usually comes in droves and it appears that is just the case for the Philadelphia 76ers of late.

First, the newly approved Sixers owner Josh Harris has promised to slash over 9,000 ticket prices in half in order to start tilting die-hard Philadelphia fans back to the Wells Fargo Center for basketball.

Secondly, the NBA owners and players met Wednesday for 16 consecutive hours with a federal mediator.  That can only mean good things (Right?).

Finally, Sixers fans should still be basking in the glory of what Lou Williams did last Saturday evening, upstaging Kevin Durant and John Wall in leading the underdog Team Philly to victory.  In particular it was Williams’ defense and not even the 53 point scoring outburst that had writers buzzing.

I’m not an upper echelon journalist – yet – to have met with Josh Harris or David Stern.  But I did deliver on the Lou Williams end.

If somehow, someway the NBA returns in mid-November, I hope we get to see more than 23 minutes per game out of Williams.

We all know he’s been a streaky player in the past, but take one look and you can see that Louis has been busting his butt this off-season in hopes of a big year in 2011-12 season — if the season ever tips off.

Philadunkia: What 76er have you been in the most contact with?

Louis:  I talk to Evan single day. That’s like my little brother. When he first came in I kind of embraced him and we really hit it off. That’s my guy. Dre I talk to twice a week. Elton once a week. Jrue every one in awhile. That’s the great thing about our team, we’re actually friends, were actually close.

Philadunkia:  Did Doug Collins help bring you guys closer? Or was that you?  Jrue and ET have told me they look at you as their leader

Philadunkia:  Who do the 76ers need to be the most improved player going into next year?  Evan?  Spencer?

Louis:  I think collectively we all have to get better. We are a young team, we average out at 24 years old. We can’t really just put it on one person because we don’t have an all-star on the team.

Philadunkia:  What’s an average day for you like during this lockout?

Philadunkia:  I saw you jibber-jabbering with Nolan Smith a bunch. A little rookie hazing?

Louis:  He actually asked me for my advice. I don’t know what it is about my face, young guys always are asking me for advice (laughs). He asked me some defensive things about using his hands.

Philadunkia:  Lou Williams, when are we going to be playing NBA basketball again?

Louis:  If it was up to me, we would be playing already. Obviously they got some big meetings coming up on Monday and Tuesday to see if they can has things out. I just want to be clear that the players want to play, we want to be on the basketball court but at the same time we want to be treated fairly and get a fair shake of the deal.