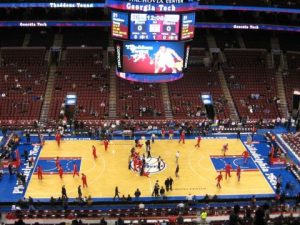 The seemingly eternal NBA lockout has given Sixers fans an empty feeling.  It doesn’t help that most of those fans witnessed the demise of their beloved Phillies and endured a Birds team that quickly became the dream unfulfilled.

Sadly, though, the true Sixers’ faithful have become acquainted with being drowned in emptiness.  Every season, they witness empty dreams, empty unfulfilled talent, and most definitely an empty arena.

Though, maybe, just maybe, a new dawn of fulfillment has begun in South Philly.  That’s what the new Sixers’ ownership group would like fans to believe.  In order to instill that belief, they have announced lowered ticket prices in multiple sections all over the Wells Fargo Center, otherwise known as (Ed) “Sniderville”.  In fact, they haves slashed prices by nearly 50% for select lower level seats and dropped prices throughout the arena..

Obviously, it may purely be a strategic business ploy simply to sell seats, that would otherwise go cold and unused.

Yet, it could also be an essential key in energizing what has become a lifeless franchise.

In a day and age where the price of sporting events are constantly surging, it is a refreshing site to see Josh Harris, Adam Aron, and the host of co-owners (including the Fresh Prince himself) recognize that their product (right now) just isn’t worth the price of admission — especially given the current state of the economy in this country.  They recognize that they have no star power and realize that they have to make concessions in order to re-build what was one of the best brands in NBA history.  It is that same brand that produced Wilt, Dr. J, Charles, and the arena filler, himself, Allen Iverson.

What the price reduction really shows is the Sixers’ commitment to the fans.  That’s something that they felt was lacking during the Snider era of ownership.  Although he denied it frequently, there were times where it seemed that Snider fully supported his Philadelphia Flyers, while he tolerated his basketball team.

While, respecting the fan base is vital to the franchise’s success, it means nothing, unless the Sixers can pull themselves out of NBA purgatory.  With it’s current roster, they can’t maneuver the proper changes necessary to compete for a championship thanks to the egregious contracts of Elton Brand and Andre Iguodala.  It will probably remain that way unless the NBA Players Association makes major changes in their stance in the current labor negotiations.  Though, it’s highly likely that Iguodala has played his last game as a Sixer and will be traded.

The newly formed ownership group says that they “are intent on transforming the fan experience” and “will get all of Philadelphia talking.”  The only thing that matters enough to get Sixers’ fans talking is winning – as in championship caliber winning.  Without that championship hope, they couldn’t give away tickets, literally.

It was just last year that Sixers were giving away tickets just for being AT&T customers!  That’s not a misprint!

The new bells, whistles and in-game entertainment that will comprise “the show” Harris and Aron referred to in their press conference last week will mean nothing to Philadelphia sports fans unless Rod Thorn can build on his young talented team, and find a superstar to lead them.  That is the only way “the house that Iverson built” will once again return to the hottest place to be, as it once was a decade ago.

The new ticket prices have gotten the new era of the Philadelphia 76ers off to a good start.  Though, it would be wise for John Harris and company to know that anything they do means nothing if the Sixers don’t play meaningful basketball in the spring.  Without that, their newfound investment will continue to produce empty returns.