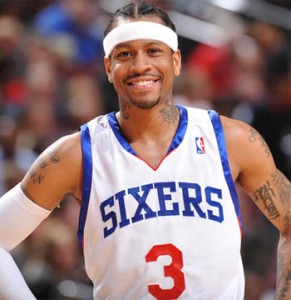 Considering that last Wednesday night’s lead story on SportsCenter was the Temple – Ohio football game, it’s become more than obvious that the NBA lockout has left a void for not only players, owners, and the game’s legion of fans, but that it has also drastically altered the plans of the sports media world including the “World Wide Leader In Sports.”

While NBA enthusiasts are twiddling their thumbs, and star players are living out their football fantasies due to pure unadulterated boredom, there is one man who stands to benefit from the lockout.

Allen Iverson has been disassociated from the “Association” for almost two years now.  Since his last memorable stint with the Sixers, he’s had a brief, but well documented run with Besiktas in Turkey and well that’s it.  Truthfully, to say that he played in Turkey would be equivalent to saying that Royal Ivey was a major contributor during his time in Philadelphia.

Since his foreign basketball adventure in December of 2010, Iverson’s life could be described as an elevator ride that has been heading straight towards the level below the basement.  His wife, Tawanna, filed for divorce for a second time in just 2 years, and, of all things, his Lamborghini was impounded.  This, combined with rumors of serious financial debt and a gambling addiction, have produced the ultimate fall of grace for man who once a Napoleon in the NBA world.

Despite his lean 6-foot frame, he was once a giant amongst the premiere basketball stars in the world.  One could argue that he was just as popular in Beijing as he was at the Beijing Restaurant in University City.   While his legacy is certainly legendary, his demise has been a painstaking unfortunate reality show that not even VH1 or MTV could create.

Still, there soon could be light at the end of Iverson’s tunnel.  As we all know, Iverson is hosting a 2 day tournament in Las Vegas on November 12th and 13th which only the lockout could have made possible.  He could potentially be the benefactor of League’s work stoppage, with the advantage of showcasing whatever skills of his that remain against players who would otherwise be in the early stages of their season; including Kevin Durant and Amare Stoudemire.

It’s likely that A.I. would not even had gotten a look, by anyone, considering that he’s 36 years old, remains undersized, and now is without the quickness that allowed him to flourish at the game’s highest level while earning himself the 2001 MVP award.

With a season that will probably not start until at least December (If at all.),all the eyes of the NBA world will be cast upon Las Vegas in mid-November.  That is, in the end, exactly what Iverson needs.  Simply stated: he just needs a chance to show that  he still has the game to as he said, “play for anybody.”

While no team will be knocking down the door for the former Sixer great, Iverson could be valuable simply based on experience alone.  This lockout has negatively impacted the learning curve for the 2011 crop of late round draft picks who now may not make the NBA grade, when in other years they would have slid into a roster spot.  That may just be the chance that old vets like A.I. need.

There is no doubt that Iverson will put on a show in Sin City.  He will dive for every loose ball.  He will prove that he can distribute the rock, despite over a decade worth of evidence showing otherwise.  He may even play decent defense, in games where defense will be optional.  It’s all because Allen Iverson is a fighter, a warrior, and because of his love for the game.

He once was a mainstay on the very same SportsCenter that recently lead with MAC football highlights.  Now, Iverson would most assuredly be satisfied with just having his name centered on any NBA jersey, anywhere.  Thanks to corporate and labor stubbornness — some may even call it greed — he may just one more chance to avoid retirement.