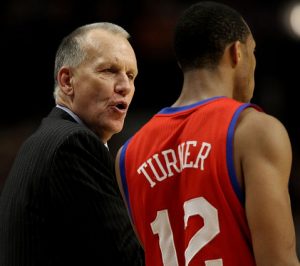 Rumors continue to float around the Internet and on the sports talk radio airwaves that Doug Collins has “lost” this team.  Thaddeus Young did his best to squash those rumors last Sunday when he told the local media, “We’ve got Coach’s back all the way.  [Has he] lost us?  Man, nobody is even thinking about that.  We’re thinking about winning games and getting back on track.  All that other stuff is just gossip.”

Still, the rumors may have a hint of truth in them.  Now I don’t think Collins has “lost” this team.  Nor do I believe that we are headed for a scenario like the Stan Van Gundy – Dwight Howard – def-con 5, level of drama that went down in Orlando.  And I certainly don’t believe that Collins  is fully responsible for the Sixers down swing of late.

But what I do believe is that especially over the last ten games or so, Collins has “lost” his touch with this team and has not been pushing the right buttons for this squad of late.  Thus he has had a role in the recent unacceptable level of play being witnessed from Philadunkia’s home team.

1)  He has completely screwed up Evan Turner by toying with his minutes, his role and his confidence.  Running paralell to this thought is my idea that he has also ruined this season for Jrue Holiday with the same tri-fecta.  Pick a point man and stick with him.  Of course it would help Collins if one of these two young cats would grab the PG spot by the throat and refuse to surrender it.

2)  He has given Spencer Hawes too long of a leash.  Since his return from injury, the veteran — and we know how Collins loves his vets — is continually allowed to under perform on offense and has been simply brutal on defense without repurcusion.  Meanwhile, young players like Holiday and Turner are yanked and sat for long periods of time for their mistakes.  Double standards do not sit well in locker rooms.  Especially those without a strong veteran leadership presence.

3)  He has ridden Thad Young and Louis Williams into the ground.  When the Sixers were playing well and sitting at 20-9 Collins admitted that the team may be leaning too heavily on these key members of “The Night Shift”.  Yet, he did / has done nothing to rectify the situation.  I’ll admit a large part of that was because his starters have been awful since the All-Star break, which has forced Collins to continue to rely on Thad and Louis every night to carry this team.  Some relief arrived in the form of Sam Young at the trade deadline, but Collins has chosen to use him sparingly or not at all.  It’s the head coach’s job is to recognize and solve these types problems and Collins has only done half the job here.  As a result, these two key members of the Sixers have look exhausted of late.

4)  He has turned rookies Lavoy Allen and Nikola Veucevic into spectators.  When Spencer Hawes was out with his Achilles issues, Allen and “Big Nik” did a more then respectable job holding down the 5-spot for the Sixers.  Since Spencer’s return, Collins has found little burn for these young bigs and their recent lack of minutes has become disturbing — Allen is averaging 5 mpg. in his last 8 games & Vucevic is logging only 12 ticks per night over that same span (and that’s with his 29 mins the other night vs. BOS averaged in).

5)  He’s holding on too “tight” during the games.  Over the last 10 games or so, Collins is sticking with ineffective line-ups / players too long out of faith, overloading other players with minutes (see EB 35+ vs. ORL), has shortened his roation to the point where the Sixers should only dress 8, maybe 9 most nights and in general is over coaching this team.

6)  Lastly, and this one goes back a little further then the last 10 games…Collins has continued to hold onto the idea that Jodie Meeks is an effective NBA two-guard who spreads the floor for the Sixers.  Meeks has proven over the last two years to be a crap shoot from night to night and anyone can see that fact.  I realize that Collins can’t and won’t “slam” guys on this roster, but why Collins has continued to back Meeks so strongly is a mystery to me.  Collins should have begged Rod Thorn to make a move at the trade deadline (or before) and fix our issues at the 2-spot.  I still say Stephen Jackson (8.7 ppg. & 4.7 rpg. since being traded to SAS) would have looked great in a Sixers uniform.