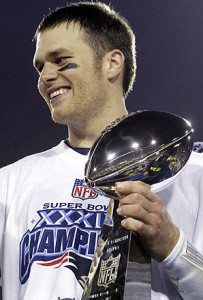 My brother and I, both not Patriots fans, were and are fascinated by the rise of Tom Brady.  A little known fact about the Michigan alum is this: he didn’t become great until well after he was publicly recognized as being so.  An even lesser known (though speculative) fact about Tom Brady is this: the fact of everyone thinking he was great didn’t just anticipate, but maybe precipitated, his actual greatness.

To wit: Tom Brady was a league average quarterback on a pretty good, but very well coached, Patriots team in 2001 that got inordinately lucky down the stretch and parlayed the luck into a Super Bowl win.  The quarterback, due to his looks and new jewelry, became not just ungodly famous — magazine covers and the whole shebang—but was suddenly credited with being one of the top quarterbacks, no players, in all of football.

And so he became one.

We coined the phenomena, which crops up not infrequently in sports, the “Tom Brady Theory of Evolution.”  (If it sounds like we were reading too much Bill Simmons then, it’s because we were.)

The theory gives us a framework for understanding, among other things, Eli Manning, Jud Apatow, the 2008 New York Giants, Rick Santorum, and Rulon Gardner.

It also explains, through some admittedly Rube Goldberg logic, the 2012 Sixers.

What has happened to this team — which, lest we forget, was legitimately the best in basketball for a substantial chunk of the season (they had the best scoring differential in the NBA until the second week of February)  and yet has somehow posted a 12-21 record these last two  months despite not suffering any major injuries or unfortunate personnel changes — isn’t, I don’t think, a matter of the players tuning out Doug Collins, or the League getting hip to their idiosyncratic scheme, or the mere fact of how flat hard the whole roster has had to play to make this crazy thing go eventually wearing everybody down over their hyper-condensed schedule, but really just this: we’ve got a reverse Tom Brady Theory of Evolution on our hands.

At a certain point, to coopt a line, you are what your record says you are.  Even before the rest of us, the Sixers understood that. And on March 30, they finally collapsed under the weight of their own strangeness, losing to the dreadful Wizards by 21 points. The Sixers got so many bad breaks that, eventually, it broke them.

In basketball, and in life, you don’t always make your own luck. Sometimes, your luck makes you.