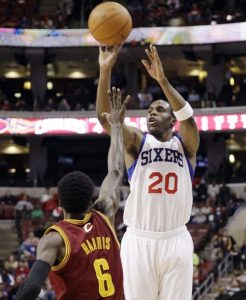 It has been quite the rollercoaster of a season for Philadelphia’s 76ers, one which included a stint at the top of ESPN’s power rankings, as well as a slump that had many speculating as to whether the team would even be able to push into the postseason.  Despite this inconsistency, the team was able to clinch their second consecutive playoff birth this week, and head into the NBA’s second season as assumed first round fodder for one of the East’s elite.

While any playoff appearance is an exciting accomplishment, seeing the Sixers have to struggle their way into a somewhat shallow East’s last seed is disappointing, especially after such a strong start to the season elevated expectations.  With the Sixers sitting on the East’s eighth seed and a match-up with the battle-tested Bulls looming, it leaves one to wonder whether the team might have been better off slipping into the lottery and allowing themselves at least an outside shot of acquiring franchise-changing center Anthony Davis.

This team however was too talented for the NBA Lottery, as recent wins down the stretch may have worked to reignite some confidence in the young squad as they head into the always unpredictable postseason.  It is no secret that benches shrink once the playoffs come around and coaches become extremely picky as to who sees playing time.  Rotations often shrivel from 9 or 10 to 7 or 8 as players are expected to pick up their overall performance.  It will be interesting to see how Coach Collins handles this aspect with the Sixers as they have been an especially deep team all season, with eleven different players averaging at least ten minutes per game.  Minutes for backup bigs Lavoy Allen and Tony Battie will almost definitely dip, but outside from that it is difficult to determine how Coach Collins will readjust the rotation.

With that being said, the ample amount of minutes given to streaky-shooting Jodie Meeks seems to be an area of great concern, and if the Sixers hope to have any chance to advance in this year’s playoffs it must be addressed.

Except for a brief hiatus this year, Collins has steadfastly stuck with M”Capt. Streaky” over the majority of the past two seasons, starting him 112 times throughout that span, despite mediocre productivity (9.2 ppg.) and very inconsistent shooting.  Prior to last season Meeks had started exactly zero games in his pro career and looked destined for an off-the-bench, knock down shooter-type role; a good fit for the sharp-shooter from Kentucky.

However as Coach Collins took over the team at the start of last season, he promoted Jodie to a starting spot, explaining that he would help stretch the floor, while allowing highly-touted rookie Evan Turner to become acclimated off the bench; a move that while maybe was not completely understood was at least accepted.  Meeks finished out last season as the starter, although some felt that the continuing development of Turner’s defense, ball-handling, and decision-making should have elevated him into the starting spot as the better all-around player.

Thus, imagine the surprise of Sixer fans heading into this season, hoping to build upon the momentum of the Miami series, in which Evan Turner excelled and the Sixers, despite losing, played solid and surprised many, when they saw that Jodie Meeks was again slated to start.  Last season the move made some sense, and Collins had the logic to back it up; Turner wasn’t yet ready to embrace a starting role, and in the mean time Jodie’s presence would help open up the lane for everyone else.   But this season the same logic didn’t apply.  Turner was entering his second season, and seemed ready to continue to develop his game as a starter, offering much more overall on the court than Meeks could muster.

Yes, a one-dimensional spot-up shooter (who hits shots) could be essential to a team, but a couple other factors must first fall into play.  The team must have the proper personnel, which the Sixers don’t.  Spot-up shooters such as Meeks thrive off of players that consistently slash and attack the basket; the Sixers are not a drive and dish team.  For as good as they are at penetrating, Jrue Holiday and Lou Williams aren’t usually looking to kick it back to the wing once they have pushed it into the paint, and Igoudala tends to be more of a mid-range man himself.  Meeks could probably be a 12 points per game player on a team like Phoenix with Nash distributing to him daily, but without such a facilitator to open up his shot and little else to offer, his worth becomes limited, and it’s not like any of the Sixer bigs demand a double to make Jodie’s job a little easier.

Of course Jodie (one 3PM in his last 7 games) would actually have to hit the open shots a player like Nash would get him for this theory to work.

To succeed in the playoffs Coach Collins needs to maximize the amount of time that he has his impact players in the game; Igoudala, Young, Turner, and Williams will all need to see more minutes, many at the expense of Meeks.  Ideally, Meeks’ 24 minutes per game that he saw in the regular season could be cut in half, and those twelve minutes could be distributed to the players such as Turner, Young, and Igoudala who can make an impact defensively against some of the stars the Sixers are set to face.  Those three would be imperative in a battle against Miami’s big three if the teams were to meet, and Turner will certainly have to try his hand at slowing Derrick Rose if it is instead the Bulls whom the Sixers face.  Lou Williams, although not as tough defensively as the others, clearly the Sixers best scorer, would benefit from any additional time as well.

The Sixers face an uphill battle in these upcoming playoffs, and in order to succeed adjustments need to be made.  Meeks does not need to be shelved entirely, but rather just limited to an off-the-bench offensive threat, allowing Igoudala, Turner, and Young’s impact on the game to expand.  It seems that this approach may provide the Sixers with their best opportunity to advance in the playoffs.  It will be interesting to see if Coach Collins agrees.