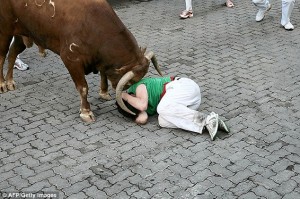 Only four times in NBA history has an 8-seed lived to see the second round of the playoffs—the most recent survivor being, of course, the 2011 Grizzlies—and if the Sixers want to make it five, they have their work cut out for them.

Starting this afternoon at 1 p.m., the 7-6 begin a seven-game set with a Chicago squad that’s now twice consecutively finished the regular season with the best record in the East, boasts the Association’s top defense and its reigning MVP, and has enough depth across the rest of the lineup that it withstood…no, thrived during Rose’s extended absences this season.

But while the Sixers more than held their own against the Bulls in 2012, outscoring them by two points in three head-to-head matchups, Philadunkia’s own fearless forecasters see an uphill climb for the home team.

And according to our fab five, it’s a really steep hill:

Doug Collins would never say this, but its obvious that the Sixers were in tank mode simply to avoid the vaunted Miami Heat. That may have been the smartest move the Sixers have made since the all-star break.

They now prepare for a first-round series with a Chicago Bulls team that they are very similar with. There’s only one distinction between the two teams, and that distinction is the reigning MVP: Derrick Rose. Rose will ultimately will the Bulls to series win but it won’t be easy.

Rose is still not 100 percent, and Chicago will need every bit of his scoring, as the Sixers, like Chicago, are defensively stout.  The last time the Sixers faced a hobbled Rose, the result was a Philadelphia victory. When Rose was healthier, the Bulls pulled out a tough, down to the wire victory.

The Bulls won the regular season series, but the point is that the Sixers can compete with the top seeded Chicago team and will push them to the limit. Derrick Rose will be the Sixers breaking point. But, this will be a fun series. Bulls in 7.

After such a promising start to the season elevated all expectations, it is sad to say that it seems as though this year’s iteration of the 76ers will fare about the same as last season’s.

If the team was able to keep up the success and momentum with which they started the season for the duration then we might be looking at a slightly better matchup and an opportunity to advance.  The second-half slump however pushed them to the bottom of the playoff barrel, set to face a strong Bulls team with which the Sixers struggle.

The Sixers depth and defense should keep them in the series, and maybe even work to steal a game or two, but Chicago is extremely strong in those areas as well, and they have some guy named Derrick Rose, who happens to be last year’s MVP.  So while the Sixers may have enough to make it a respectable series, in the end Derrick Rose and the Bulls will simply overpower the young Sixers squad.

Sixers will do much better vs the Bulls in this series then most NBA fans expect. If they played the Heat no doubt they would be swept, as the matchups are not favorable, but do not be surprised if the Sixers grab two games in this series, vs the team with the best record in the NBA.

In the three games they played Chicago, the Sixers won the first by 16, and lost the other two by single digits. They match up well against the Bulls, because unlike the Heat, the Bulls have really one main scorer the Sixers need to defend to go along with three stellar role players in Deng, Boozer, and Noah.

The one Sixer who I think will step up is Thaddeus Young. His matchup against Deng is very favorable, as he is bigger and more athletic than the Bulls small forward. In the three games vs the Bulls he averaged 15 points and 8 rebounds. Look for him to keep that success up in this series.

The Sixers will play the Bulls very tough, most likely as tough as they played the Heat last year, and will go down in 6 games to a team that will most definitely make it to the Eastern Conference Finals.

While the Bulls are certainly a more favorable matchup then the Heat, I don’t like the Sixers chances at all in this series.

For the Sixers to steal one or two games Dre must continue his recent stretch of aggressive offensive play, Jrue must slow down Rose (some), Turner must play well and we have to get something out of the 5-spot.

Even if all that miraculously happens, the Bulls win in 6.

You know that scene in those 60s-era coming of age movies where a young kid takes up smoking after he sees his mentor/father-figure doing it—that looks fun, I think I’ll give it a try—but the salty old bastard, gruff but lovable, catches him lighting up and makes him smoke a whole pack as punishment? And he gets really, violently sick? Well, I think the Bulls are about to make Evan Turner smoke the whole pack.

Despite landing the opponent he publicly wished for—not without good cause—I expect Turner and Co. to spend the next week putting an appropriately depressing capstone on a season that’s gone off the rails. The prediction: a 4-1 defeat, the win a blowout, with a couple close losses, vintage 2012, mixed in for good measure.

Now the problem isn’t the matchup per se—the Sixers did outscore the Bulls 269-267 in three games this season—but really the home team itself: with a 15-22 record in the back end of the season, and a defense that’s showing signs of decline, the list of teams the Sixers could reasonably expect to defeat in a seven-game series is a short one. And the Bulls aren’t on it.