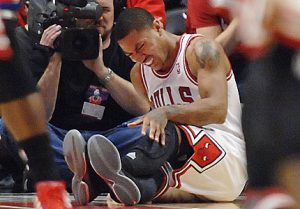 As a basketball fan, and a human being who likes to see decent, hardworking, people succeed, I’m crestfallen by the Derrick Rose injury. The NBA Playoffs is, to a unique extent, a space where the very best in the world compete. And to see that competition reduced is a loss.

In the interest of honesty though, I should also acknowledge this: I’m a Sixers fan. And the fact that this injury significantly improves my team’s odds of continuing to play on in this tournament is a silver lining I can’t help but see and feel.

So, ambivalence deep set, I turned to the Internet to help clarify my feelings on the biggest playoff injury of my lifetime.