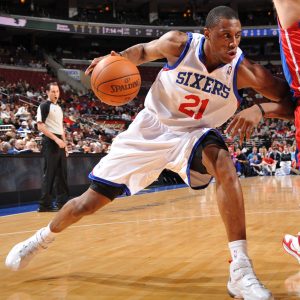 Looking back upon the 2011-12 season, it is somewhat difficult to grade Thaddeus Young’s fifth season with the Sixers’ franchise.  While he performed his role well and played very solidly throughout the season, you can’t help but be left with the feeling of wanting more from the lanky lefty.

Since the Sixers selected Thad in 2007 after just one successful season at Georgia Tech, Philly has kind of been waiting for him to come into his own.  The raw skills were obvious immediately, and after a sophomore campaign in which he started 71 games for the 7-6 and averaged a promising 15 points per, he seemed poised to push the team, and himself to the next level.

The next couple seasons however saw Young relegated to a role on the bench, and while still productive, many felt that he was not quite living up to his potential.  2011-2012 saw similar inconsistencies from Young, who could often go from anemic to incredible in the same game.  While his numbers didn’t dip, 12.8 ppg and 5.2 rpg this season, compared to 12.7 and 5.3 last year, they didn’t improve either, which is what you look for in a promising young player.  In fact, Thad’s numbers have only fallen since that promising second season; not a great sign for Sixer fans hoping they had found a starting 4 for the future.

Although improved defensively, his size is still an issue, as it has been for most of his professional career.  At 6’7,’’ 220 pounds Thad is stuck between positions; a little undersized to bang with some of the bigger bodies at power forward, yet not quite nimble enough to mix it up with some of the premier perimeter players such as LeBron James or Kevin Durant.  His frame isn’t his fault, but it limits how the Sixers can use him on the defensive end, as this was exposed and exploited several times in the Sixers’ playoff series this season against both the Bulls and the Celtics.  In these series, rookie Lavoy Allen took a chunk of Thad’s minutes because he is better built to bang.  On the glass the Sixers fare almost exactly the same whether Thad is on or off the court, and with his length and athleticism, it seems as though this should be an area where he has room to improve.

The effort is there, evidenced by Young’s developed proficiency at drawing charges (Young was 7th in the League with 30 drawn), but after five seasons he is still limited in what he offers to the organization on that end of the floor.  He can guard multiple positions, which is a nice asset, but he still doesn’t possess the ability to defend one position extremely well.

It is on the other side of the floor however, offensively, where the Sixers have come to expect output from Young, and while he may not have exceeded expectations in 2011-2012, he didn’t fail to deliver either.  For the season Thad averaged a solid 12.8 points per game, almost identical to his output from the previous season, while leading the Sixers in field goal percentage at over 50% and providing consistent bench production.  One area Thad showed vast improvement in was a new found consistency in his previously shaky midrange game.  He may in fact have relied on his mid-range game a little too much, as jumpers accounted for over 53% of his total shot selection; a sign that maybe he is not taking the ball strong to the hole as much as you’d like to see from your power forward.  Young was efficiently offensively to say the least, but with so much talent fit into his frame it is a little alarming to see players such as Kris Humprhies or Nikola Pekovic out-producing Thad with less tick taken.

Overall Thaddeus had a solid season; nothing spectacular, but his improvements on the defensive end as well as his offensive abilities make him a critical cog to the Sixers squad.  His physical stature imposes a ceiling 0f sorts on his game, but it would be nice to see him bulk up a little in the off-season in order to better crash the boards and battle with other bigs.  The numbers were again solid, but the lack of a marked improvement is an issue.  Hopefully Thad continues to expand his game, as he is locked down for the foreseeable future.

For 2011-2012, Thad receives a B for a season that was solid, with flashes of brilliance, but too inconsistent and thus not exceptional (A grade).